Not quite sure when this happened.

Matt was teasing me, in the loving way that only he can, earlier this week because I was so excited about State's bid to the NCAA tournament.  I quickly reminded him that I don't really care about any sports except for NC State sports, and my love for the Wolfpack runs deep.  He doesn't quite get it because he's one of those rare guys who basically does not care about sports at all, but he knows me well enough to know that my love for all things Red and White is longstanding.

State (#11 seed) played San Diego State (#6 seed) this afternoon.  And we won by 14 points!  That means we take on #3 seed Georgetown on Sunday.  Most people I know (even Carolina fans, GASP!) expected us to win today, but the game on Sunday is going to be much more difficult.

A super weird thing happened in the tournament today.  Two #15 seeds (Lehigh (from PA, I'd never heard of them before, either) and Norfolk State (Virginia)) beat two #2 seeds (Missouri and Duke) and knocked them out of the competition.  The last time a #15 knocked out a #2 was 2001...and it's only happened four times before today.  So it happening twice in less than three hours?  That's just bizarre.

So yes.  I've been watching a lot of basketball today.  I'm not quite sure when my appreciation for non-Wolfpack-related sports showed up, but it seems that I can't help but watch the NCAA tournament every year...even though State hasn't been in since 2006.  I don't know why.  I'm such an enigma sometimes.

Also, I painted something.  I've mentioned how completely NOT artistic I am, right?  Because I'm not.  At all.  I can't draw a straight line.  But I won a Memorial Box from Linny and I decided that I wasn't totally fond of what it looked like, so I was going to paint it.  I am certainly stubborn, so once I decide I'm going to do something, I do it...no matter how disastrous it may turn out to be. 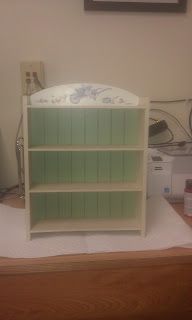 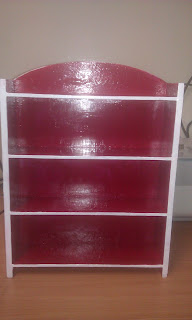 after
It's Wolfpack colors. :)  Fitting, no?  It's not totally done yet.  I need to do touch-ups tomorrow, but I got tired and frustrated.  It's kind of messy, but it satisfies me.

Oh, and also?  Campbell finally turned on the air conditioning tonight!!!  Hallelujah and praise Jesus.  If it weren't for my two fans going 24/7, I would've melted weeks ago.  That was so aggravating.

Yay weekend.  I don't have a ton of homework to do for a change.  That's nice.  Just some reading and a mini presentation on Victor Hugo for French Lit on Monday.  Totally doable.

I'm going to eat a snack and go to bed.