Music is SO my love language. 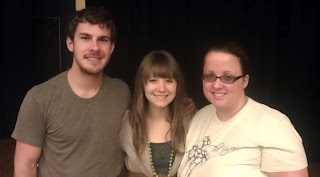 is Jenny and Tyler.
They came to Campbell this week.  They're a couple of musicians, and they played at CUW this week.  I've never actually regretted not having to take CUW anymore....until now.  Why?  Because they happen to know these people. 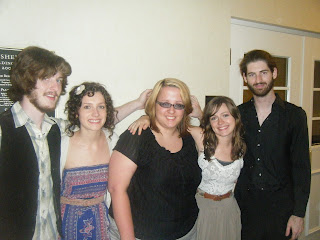 Surprise, huh?  (sarcasm)  They actually live across the street from Taylor & Bruno.  I first got "introduced" to them via The Vespers' podcast when they had Jenny & Tyler on as a guest.  I tweeted them a couple times during that, and it was really funny because Tyler mispronounced my twitter name on air.  But that was it, we never really talked after that, though I did check out their music on their website.
Well, Bruno told me about two months ago that they were coming here, so I knew I wanted to introduce myself to them.  CUW is at 10:00, which is the same time as my Psychology class (which is why I couldn't go), so I went into the auditorium when I got out of French Lit, because I figured they'd be doing sound check.  They were.  I just walked right up to the stage and I said, "Hi, are you Tyler?" because I couldn't see the face of the guy standing up there. (I've never been shy, what can I say?)  He turned his head and said, "Yes." so I said "Hi. I'm Mallory." And he said, "Oh, are you THE Mallory?"  That was not what I expected him to say, so I just kind of paused, not sure what he meant.  Then he said, "From the podcast!"  And then it was cool.  Haha, I couldn't figure out if the Vespers had told them something about me or something.  But yeah, after that it was all very cool.  We talked and I told them about me and how I knew the Vespers and got that picture (above) because, hey, they're just adorable and I love pictures.
It got really cool when I explained to them why I couldn't come to see them, because of class and everything. Tyler just randomly said, "Well, we'll play you something right now."  And then they did.  And it was ridiculous.  Meet Jenny and Tyler.  The song is called "Song For You."

I recorded it on my phone, so the visual quality isn't stellar, but the audio is great.  Like most good musicians, they sound even better live.  I didn't want to take up too much of their time, so I left after that.

Then I ran into them in the dining hall (not surprising at all) and we talked for a minute, but I had to get ready for Water Aerobics so it wasn't long.  I'm still so glad I got to meet them.

And then, another cool part of the day?  Pam (from French class) has CUW, and as I was getting out of Water Aerobics, she texted to ask me if I was out of class because she "had something to show me."  So I met her back at my dorm and she gave me this. 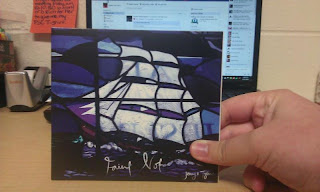 AKA Jenny & Tyler's CD.  It's SO GOOD.  Check them out.  You can actually download this CD plus three new songs FOR FREE on that website.  AND they have a new CD coming out April 3rd, which is funnily enough, the same day The Vespers' new CD comes out.

Dude.  Have I said recently just how much my life freaking ROCKS????

Because it does.  It really, really does.  I know some ridiculously cool people.