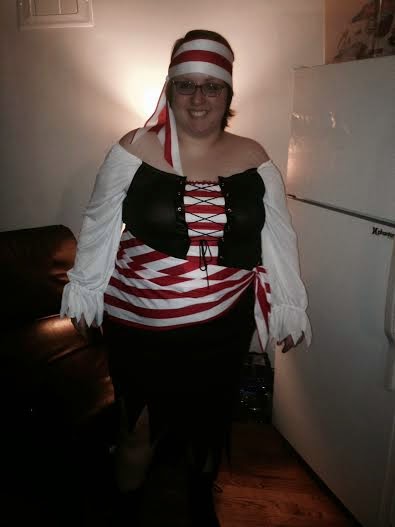 For the first time since my childhood, I dressed up for Halloween. You can thank Holly for this. But seriously, I FELT PRETTY. I actually felt like I looked good. And for the first time in I don't even know how long, I actually got compliments from strangers (and guys! cute guys!) about how I looked. This one stunningly gorgeous girl even told me I looked awesome, which was very flattering considering how she looked. That was a lovely change and, weirdly, helped me feel comfortable in a Halloween costume. Ha! You can't really see it, because of the lighting Holly insisted upon, but the hemline of the skirt is asymmetrical and jagged, and I didn't realize until I put it on just how far the high side went. Oops! Luckily, you could only really tell when I was sitting down, and hey, in dark Halloween parties, no one's really going to tell. 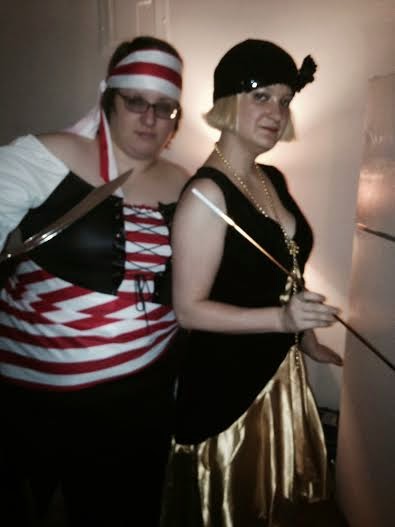 We took this picture to send to Mom. I texted her a caption that said, "Sorry. No parrots." since she thought Holly should have been my parrot. But really, anyone who knows Holly knows this costume is, like, the most Holly thing ever.

We went to several different places all over Lower Manhattan. Too many to name (and frankly, I don't remember them all). It certainly was interesting to see all the people wandering around in bizarre and sometimes freaky looking costumes. I had several people ask to take a picture with me. It was hilarious and fun and I enjoyed every single person that came up to talk to me. I did lose that sword somewhere along the way, but oh well, it's just a plastic sword.

We ended up back in our neighborhood at this music hall called Rockwood a little after 1:00. There are two stages, but any other time we've gone by there, both have been packed to the door. Surprisingly, there was space in both. So we went in the first stage and watched this awesome band called Thompson & Boombox. We tried out the second stage for a bit, but they had too many flashing lights so I went back to Thompson & Boombox and ended up getting a waitress to put me a stool right by the drummer. And I proceeded to rock out with the best seat-dancing you will ever see ;) They finished their set around 2:15 and I went and introduced myself to all of them and told them that  they were phenomenal. Because seriously, they are. Brendan, the lead singer, has a stage persona that reminded both me and Holly of Freddie Mercury...and that is saying a LOT. And his harmonies with Jack, the keyboard player and other main vocalist were just insane. I absolutely loved it. I can't wait to see them again. Derek, the bassist, even gave me their card and told me to hit them up if I wanted to jam sometime. :) Can you even imagine?! 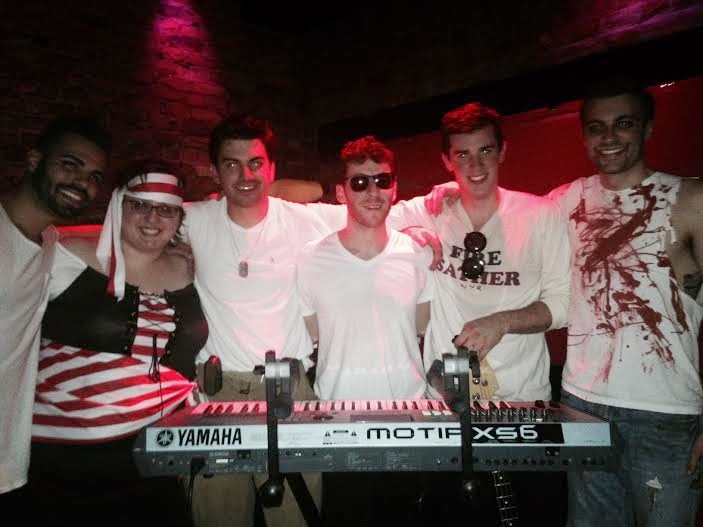 These sweet guys even let me take a picture with them. From left, Brendan, Jack, Mike, Derek, and Matt.

All in all, my goal when we left at about 6:45 was not to come home until I was absolutely exhausted. And considering, when I got home at about 3:00 I could barely stand up, I'd say that that was a MISSION ACCOMPLISHED.