Thank the Lord, I am here and now.

Today was a long afternoon and evening but it was such a good one.

The one cool/weird thing about it was that my therapist, Laura, had me end the session with the largest ice pack I've ever seen. This thing went from the top of my ribs all the way up over my shoulder to the back of my shoulder blade and then had a side piece that went down my arm all the way to my elbow. 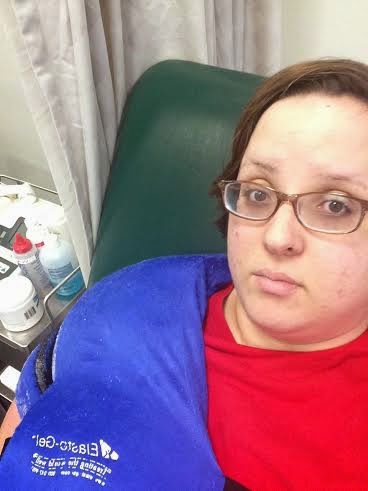 It felt AWESOME. Too bad the numbness only lasted about 20 minutes. I'm gonna look and see how much one of these costs before my surgery.

In the evening, I got to make my first trip to Brooklyn. Pastor Ben and his wife Christy had some of the grad students over to their apartment for dinner and fellowship.

We had Chinese Hot Pot, which was...interesting. 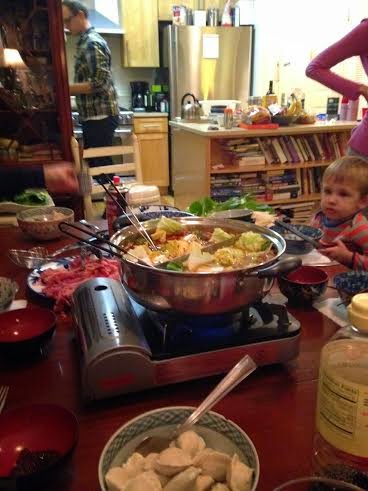 Basically, it's this pot of broth, Ben's was divided into a super spicy side and a neutral side, and you toss a bunch of raw stuff into it like dumplings and meat and bok choy, and then as it cooks you fish out what you want and put it on some rice and then either dip in some dipping sauce which you can create your own mix of or pour the dipping sauce over it. It was really delicious. I wasn't brave enough to try the super spicy stuff. It was even making the couple whose families are from India sweat. :p I did learn that I don't like tofu. It tastes like sponges! 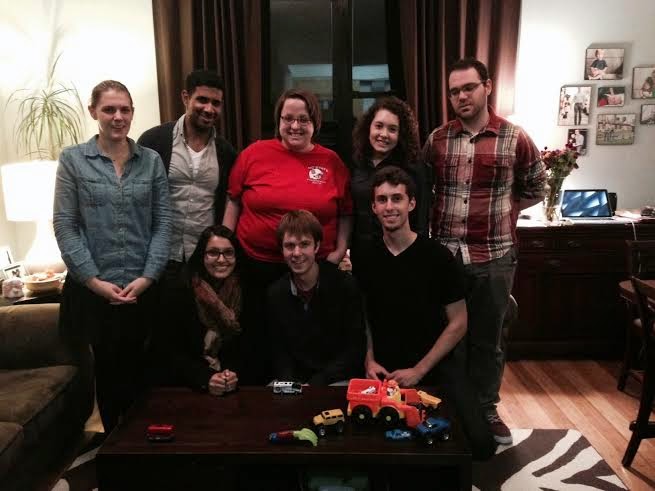 The conversation was the best part, though. There was some really funny, random stuff, like about candy from around the world, but then there was some really deep conversation about our fields and how we can God's grace in them and the people we work with and the jobs we want to do and how we as Christians can glorify God and show people Jesus in what we do. We also got into this really interesting discussion about Christians and politics (which may or may not have been partially my fault :p). I really appreciated it, not just because it was an interesting conversation, but also because it was really clear that I can speak my mind with them without fear of judgment. And it's such a cool thing to be able to learn from so many different cultures without even having to seek the experience out.

The night was when it got...interesting. Everyone left Ben and Christy's around 10:00, and Isis, Gui, and Leonidas (the 3 Brazilians to my left at the end of the group photo) were all heading to the same subway station as I was. I was taking a different route home than I had taken to get there, so they offered to make sure I didn't get lost in Brooklyn alone on a Friday night. We had to stop a few times on the way there because my legs had been hurting since my hour-long trek on the way to the dinner, but they were very kind and didn't mind at all stopping with me. Originally, they were going to be taking a different train, but at the last second, they decided to make sure I got home safe since it wasn't far from my apartment to where they needed to go. So sweet. Well my plan was originally to take a B train to Broadway Lafayette and then transfer to the F and go one stop to my apartment. Well, we waited for a B to come...and waited...and waited...and WAITED. For almost 45 minutes.

I felt so bad that they were stuck there with me, so I tried to figure out another way home. So we did, we got on another train and went one stop where we could transfer to the F (which we didn't know about at first, because the maps we had didn't say the lines offered at our station would even GO to the station one over that had F lines, but whatever). My legs were getting weaker by the minute, but we made it up to the F platform....and got stuck waiting. We had seen signs about detours over the weekend for the F line, so Leonidas and I were both a bit panicked about missing the last train, but we made it up there before the time the detours were supposed to start, and a guy explained to me that the detours wouldn't even affect us because of the stop we were going to. But still, an F train would not come. We were there for another 20 minutes or so before an F train showed up.

FINALLY, we managed to get to my station, but I could barely walk. Sweet Gui held my hand and helped me up the stairs one by one, down the block to my apartment, and then one by one up the stairs into my apartment. It took us almost two hours from the time we left Ben and Christy's to the time we got in my place. I felt SO bad because they could have been home a long time before that, but they could not have been nicer because, as Isis said, at least I didn't have to wait in those stations alone and they were there to help me walk home because the pain was really bad.

A lot of my walls got broken down by God tonight. I feel more like I can trust my church family with the hard, and sometimes embarrassing stuff now. And that's a really good feeling.

My church family, and the fact that I found them so quickly, that's just another reason why I really believe that God brought me to New York for a reason, and it's not just all going to be snatched away from me.