Ah, look at all the pretty people!

So I've gotten back into Dancing with the Stars the past couple of seasons. I don't watch it live, but I watch the dances of the celebrities that I care about on Youtube and look at the scores and eliminations on Wikipedia. That way, I get all the relevant information and skip all the other stuff. But since I started watching in Season 4 and that was, ohhh....seven and a half years ago, I've grown rather attached to some of the pros. Some haven't been there the whole time, but still. They're phenomenal dancers and even better looking, so what's not to like? ;)

Three of my favorite pros, Maks and Val Chmerkovskiy and Tony Dovolani have several dance studios centered around NYC (Maks and Val grew up in Brooklyn and Tony lives in CT, so it's not surprising), and so one of my "NYC Bucket List" items was to find a way to meet Maks and Val. They're Mom's and my favorites. Well, last December they and some of their dance friends created this massive dance show called Sway that sold out several nights. Well, when I heard that they were creating Sway 2.0, my first thought was "This is my chance!"

And then my second thought was, "Crap, they probably use strobe lights."

So I emailed their dance studio company email set up for the show to ask. I got a response back via Twitter that, yes, there are strobe lights. Dang it. BUT I then got an email today saying that there were meet and greet tickets available that were just for the meet and greet, without paying for the show. SCORE.

If this blog abruptly stops after December 19, this is your warning now that it's because I died and went straight to heaven after getting to touch and talk to the Chmerkovskiy brothers.

I'm paying a ridiculous amount for this, and it involves taking two subways and a bus to somewhere in Long Island, but I couldn't pass up the opportunity to meet these guys, and some other pros that I've grown to love. 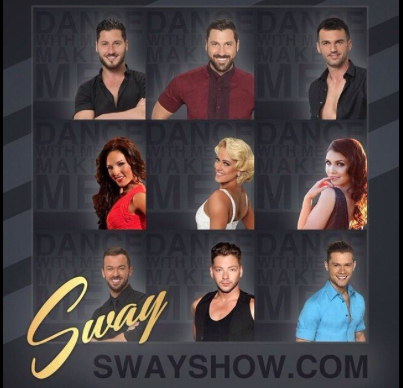 Aren't they so pretty?

Across the top, that's Val, Maks, and Tony. The girls are Sharna and Peta, both DWTS pros, and Jenna, a DWTS dancer. The guys on the bottom are Artem, a new DWTS pro, Serge, a friend of the guys, and Henry, a DWTS dancer.

I called Mom and told her and she laughed hysterically and then said "Kiss Maks and tell him it's from your mother. Kiss him ON THE CHEEK." She told me it's ridiculous that I'm paying so much for a meet and greet, but she doesn't blame me one bit.

Shoot. When it comes to him, Val, and Artem, I'll be kissing them all for me.

I can't help it. They're just so pretty.