I'm a nerd. A nerd with an adorable nephew. 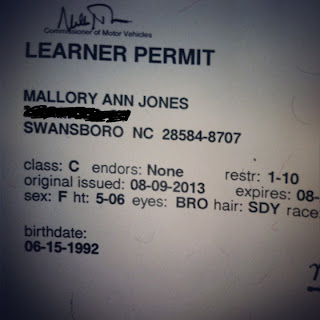 It's officially official! :)  I am allowed to learn how to drive a car.  This is my temporary permit until the hard one comes in the mail.  I'm so excited.  Mom's even letting me drive part of the way to school tomorrow (we're going in the old car).  Yes, we're going to school tomorrow.  Mostly to get out of the house, but also so I can study without dealing with Chelsea and she can continue to get more work done on her classroom.  The good news is it will be all day, and Mom only has one bulletin board left to cover now that she's gotten some new wrapping paper, and that's the only thing left I can help her with.  So I should actually get some real studying done this time.

Speaking of studying, today was a rather productive day in that area.  Despite dealing with an unbearable headache for part of the day, I managed to study all the vocab and the 100 math concepts in the back of the book, and then I took the practice test that was also in the back of the book.  If that were the real test, I would've gotten a 161 (out of 170) on Verbal, and 163 on Math.  I still need to really fix my issues in the Verbal section, and I also made a few stupid mistakes because I was so tired tonight, so I know I can do better than this.  I have to do better than this.  But still, scoring in the 160s when I was not at the top of my game is a pretty good confidence booster.

Not much else happened today.  I listened to a lot of music while I was working to drown out all the yelling because Chelsea was particularly awful today.  I am happy that Mom is basically going on strike against her.

Random change of subject.  You know how a lot of people are obsessed with games like Candy Crush?  Well, I'm obsessed with Words with Friends.  The nerd is obsessed with what is basically Scrabble.  Wonders never cease, do they? ;)  All that to say, this happened the other day, and it made me pretty stoked. 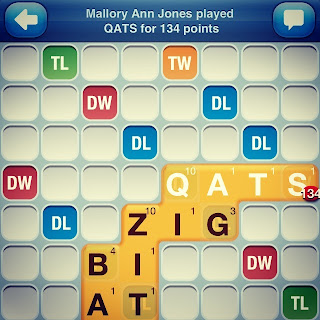 Also, here's a funny video for you.  We were in the car after we picked Chelsea up from work the other day, and the song "Won't you take me to Funkytown?" came on the radio.  I asked Blake if he wanted to go (jokingly), but he took it seriously and was all, "Pwe pwe pweeeeeeeeease?! Go Funk-town!"
http://www.youtube.com/watch?v=7MhF6z6iBDc


HILARIOUS.  I've watched that video like two dozen times and it cracks me up every time.  Man, I love that kid.