Who could have guessed that I would get to throw plates of whipped cream in my friends' faces three times in one week?!  More on that later.

Ah, Friday.  The start of the weekend, so yay, but also the start of an absolutely insane seven days, so boo.  I just barely made it through Political Thought without falling asleep.

Then, I got to go to lunch with Clayton, our little Friday tradition (every week that it's possible, anyway).  I know I say this every time I talk about him and our lunch dates, but I seriously just love talking to this guy.  We're able to let down all our barriers and be real with each other about whatever is in our hearts or on our minds.  Authenticity like that is a gift in a world that is so obsessed with image and fitting in.  He's one of the people that really knows me, too. Like, knows me knows me.  Just right in the middle of our conversation he told me that he truly appreciated my genuineness and the fact that I never mince words or pretend that I'm feeling a certain way.  He's one of the friends that I am so thankful truly knows who I am and my flaws and shortcomings and struggles and is loyal enough to love me in spite of them.  And I know that he knows I feel the same way about him.

I spent the time until French working on letters.  I decided that since I'm about to graduate and say goodbye to my Campbell family and everything is about to change, I wanted to write some letters to friends and professors that have truly impacted my time here.  I like letters.  Believe it or not, I do better expressing myself in writing than I do out loud, despite how much I like to talk.

Here's the fun stuff.  Today was Relay for Life day at Campbell.  This is always a day near and dear to my heart, for obvious reasons, so I went and got $10 from the bank (that I probably should have saved but oh well) and started walking around the loop looking at the booths.  I knew that Austin was at the Religion Club table because I stopped by there my first go-round, and then I got to the St. Patrick's Day table (the theme this year was holidays, and I'm calling it that because I never noticed what club was running it).  They told me that in addition to the food, they had pie-throwing available in which, for a dollar, I could throw a pie (a plate of whipped cream, just like Monday) either at one of the people there, or I could bring someone and throw it at them.  Well, it's no fun to throw whipped cream at someone you don't actually know.  Austin IMMEDIATELY popped in my head.  So I went back over to the Religion Club table and said these exact words:

"Hey Austin!  You're spontaneous!  I'll give the Religion Club a dollar if you let me throw a pie in your face."

Who knew that would actually work?!  Next thing I know, another member is taking the sign out of his hands, and I'm leading him away.  He never said okay, but he also never said no.  He just sort of said "What?!" a bunch of times and "Why am I doing this?" and "Oh my gosh this is going to be awful" all the way to the St Patrick's Day table.  He was not happy, but I stand by the fact that he didn't have to follow me. ;)

I asked him beforehand if we were still going to be friends afterwards.  His response?  "I...I think so."

And of course I got it on video.  What's the fun if you can't share stuff like this on social media?!

I don't know if you can hear what was said because it was so loud out there, but I said, "You know I love you right?" and with that sign of resignation and a grimace on his face he responded, "Words are words.  Words are just words."  But let's be real.  He knows.  And he loves me, too.  Otherwise, he wouldn't have done it. 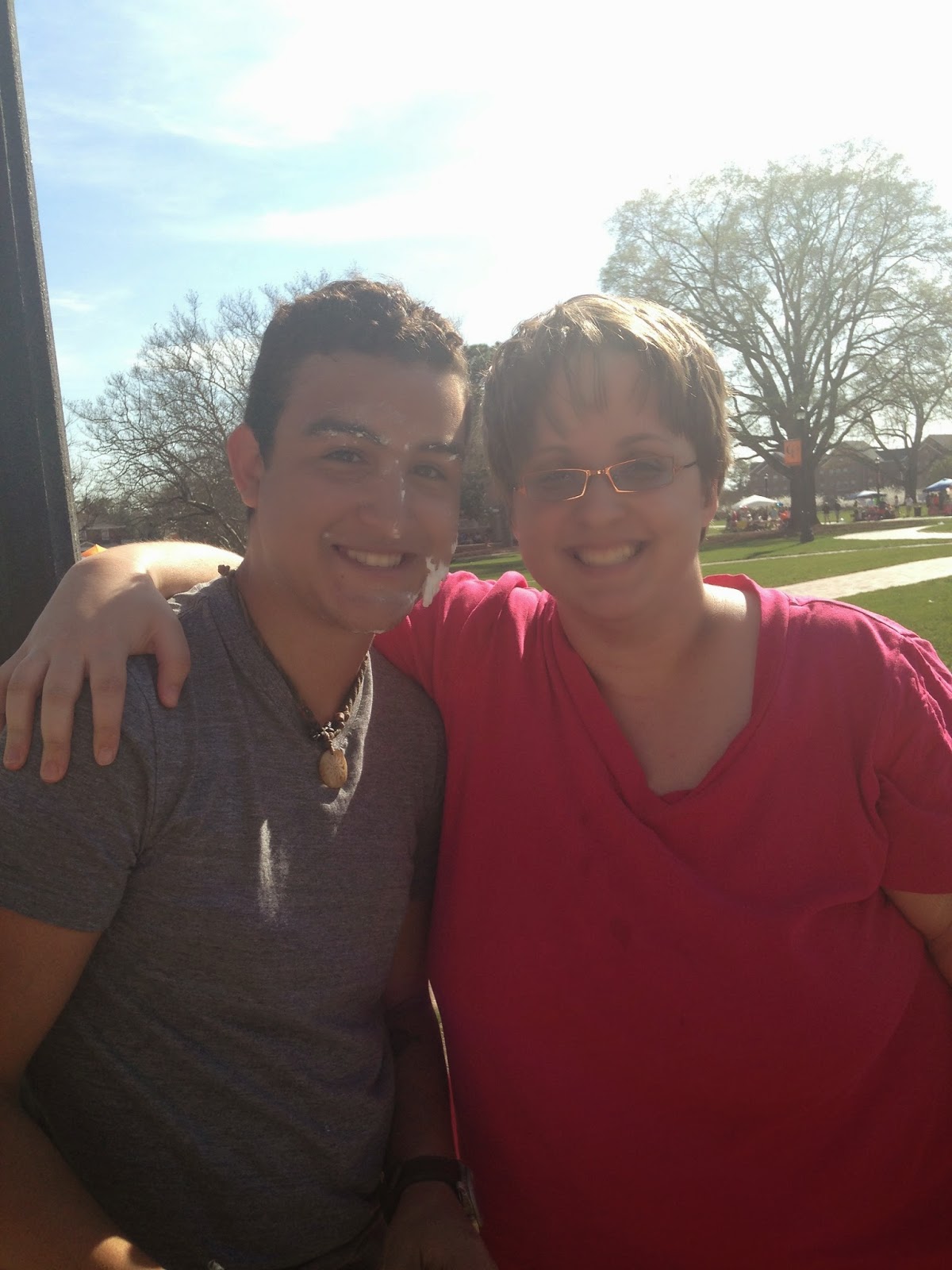 See?  He's even smiling!  But let's again be real.  He was probably already planning his revenge.  He's a sneaky thing. ;)  And yes, I did help him get the whipped cream off his eyelids and out of his eyebrows and ear (I don't know how it got in his ear).  He had to go to dinner with his brothers 30 minutes later. :p

Other highlights from the afternoon... 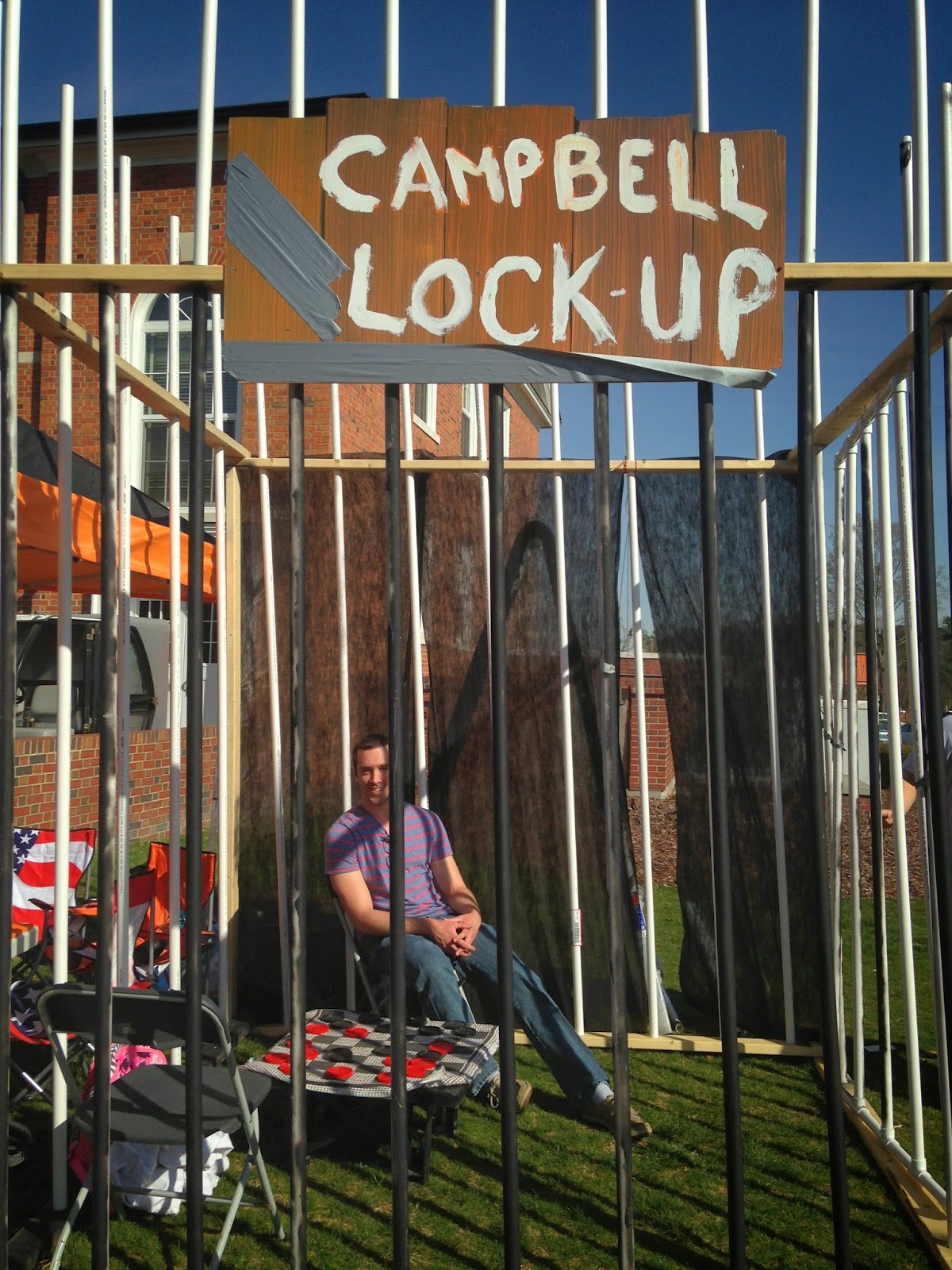 I had Clayton arrested and put in jail for 5 minutes by the Criminal Justice Club for $2.  My reason?  "For being the Pope".  (That's what people call him for being the president of the Religion Club.) 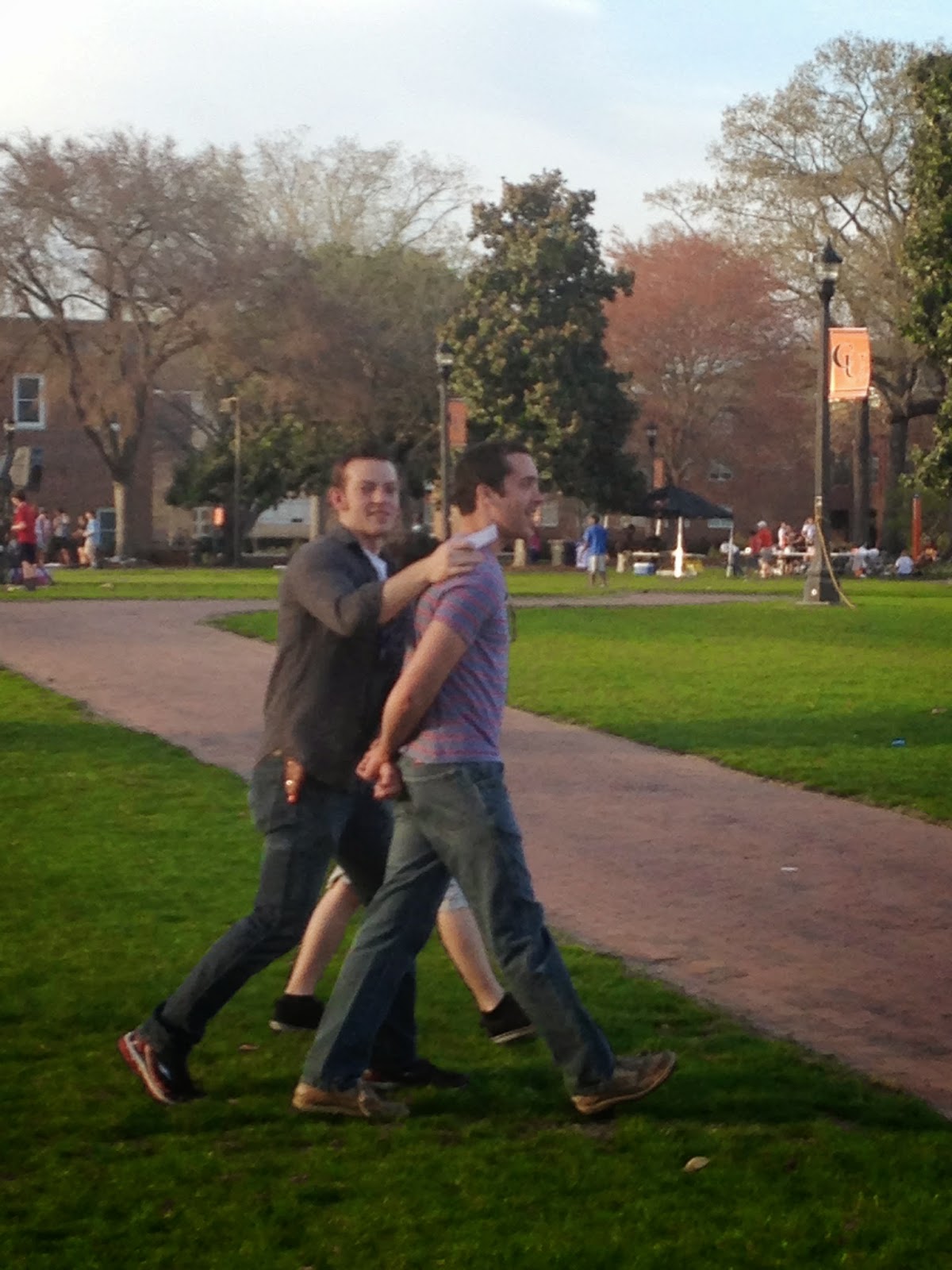 A couple hours later, someone else had him arrested AGAIN "for being a religion major".  He cried religious persecution. :p

I participated in a cake-eating contest with my friend's sorority and shoved down three cupcakes faster than some guy and then went on to nearly choke on a quarter of a chocolate cake in the next round.  I was okay with losing that one.  The two finalists had to eat an entire cake.  Gag. 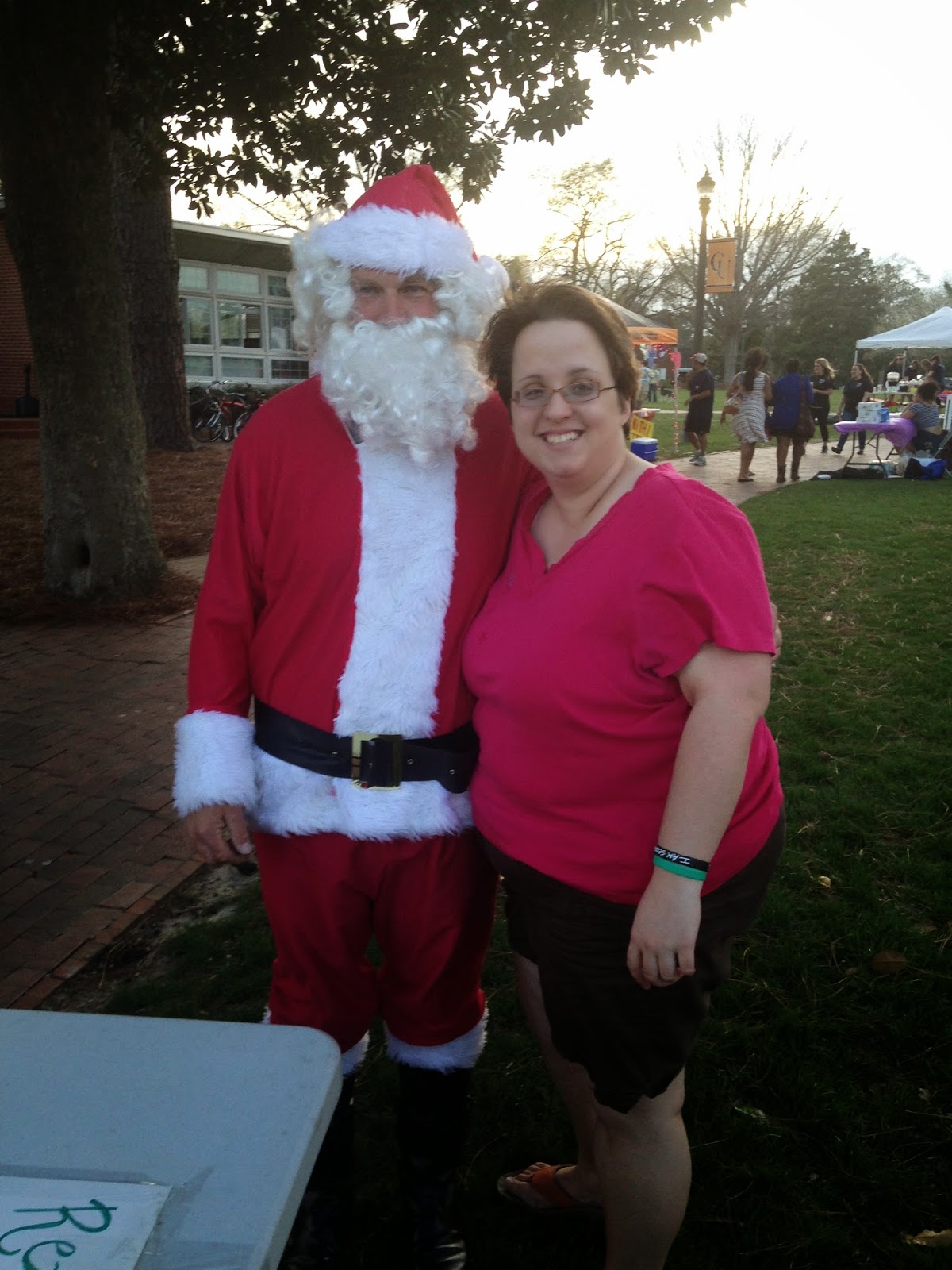 I spent most of the time just sitting at the Religion Club table with Clayton, Brandie, and Brandon and Nick, two guys that I'd never met before.  It was hilarious.

Finally, around 7:15, I decided to go because I was hot and tired and in pain and hungry.  But I had to get a picture with my brother first. 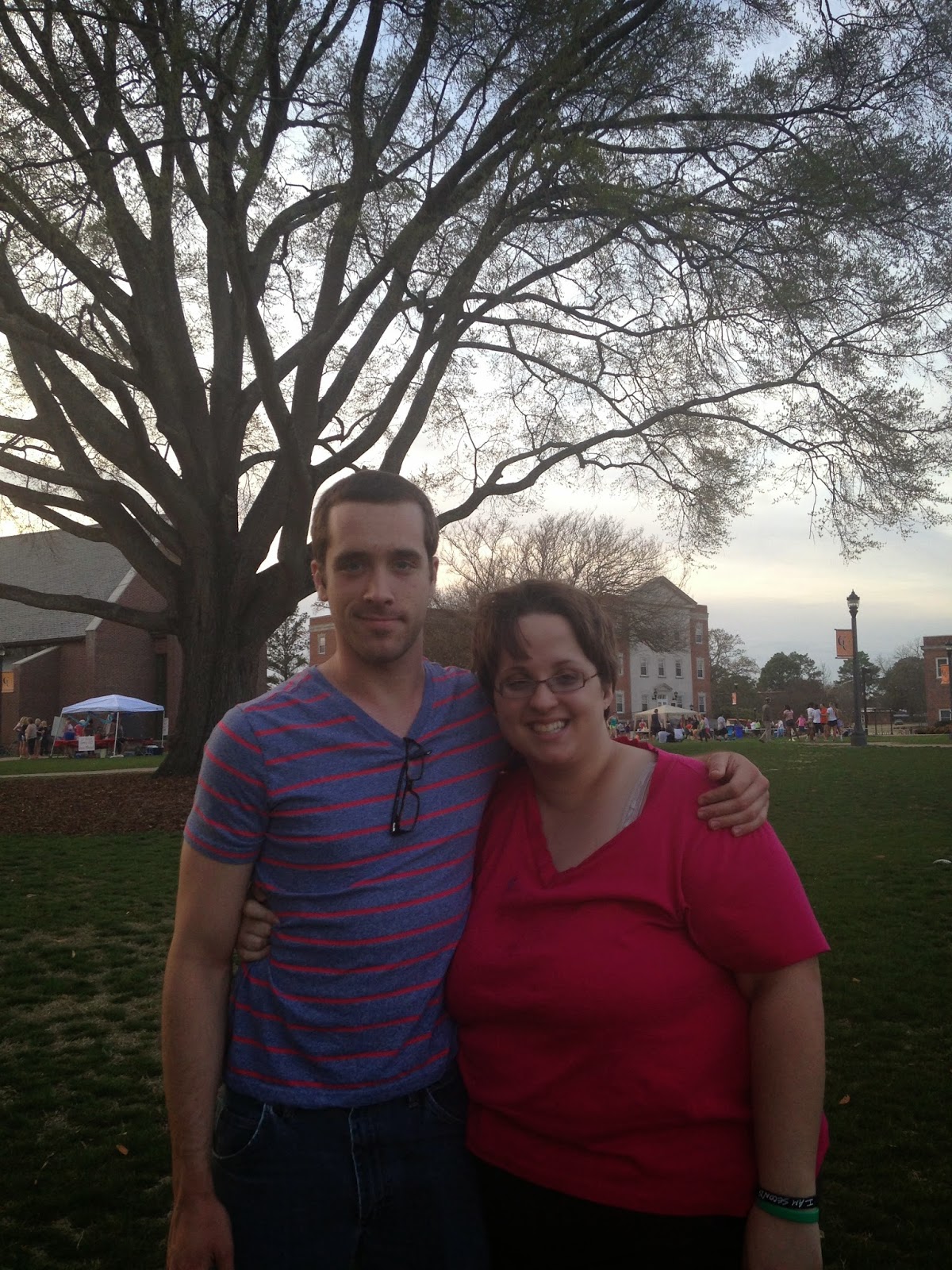 Brandon saw him hug me and said, "Clayton, have you ever hugged anyone before?" And he responded, "My mother".  Apparently he doesn't give out hugs too frequently, but he hugs me every time he sees me, usually multiple times.  He also told me I'm the only one he's always nice to.  I'm a lucky girl. ;) 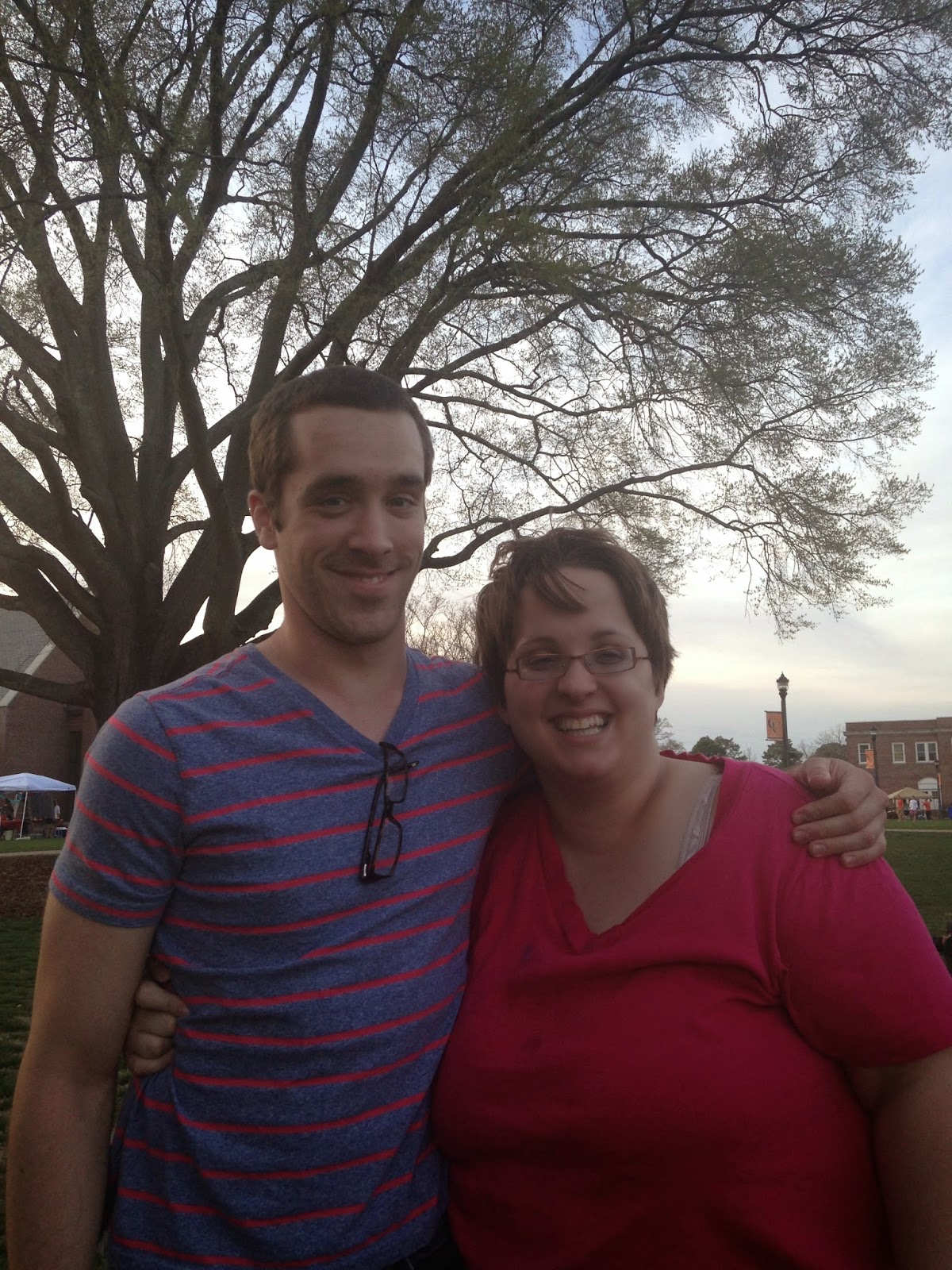 Nick, who was taking the picture, suddenly stepped forward to take another one, and it cracked both of us up because we'd just been discussing how Clayton make Nick look much bigger (he's rather short) by squatting to the ground to take a picture of him.  Hence the weird looks on our faces.

I love my friends.  No, I love my FAMILY.  People like Austin and Clayton, they are my family.  And I am so not ready to say goodbye to them yet.  Lord, help me make the most of these last few weeks.