I have no words today. I just want to share this poem from Jon Jorgenson and The Anima Series. It tells so simply yet so powerfully the story of Good Friday and the gravity of what Jesus did for us all.

The following is based on events that took place around the city of Jerusalem on the day of preparation of the Passover, approximately 33 A.D.

After dinner, in a garden, four men sat down to pray. This is the scene at the top of Friday.

On Friday, one of them would betray him, though none of them felt able. But he made it clear the night before, it was one of them at the table. Thirty pieces of silver was enough to get it done, the price that was placed on the head of God's son.

On Friday, these images flashed through his head. He knows the cup he's been given. Soon he'll be dead. There's blood on his brow where there should be just sweat. The burden is heavy; he's carrying our debt.

On Friday, he gives it all up for our sake. On Friday, the disciples just can't stay awake. In this garden, on Friday, it isn't paradise or bliss. On Friday, he's arrested and betrayed with a kiss. Dragged before the leaders, he's mocked and disgraced, back and forth between Herod and Pilate, both looking to save face.

On Friday, he's forced to defend his own cause, but Pilate knows, in his heart, this man's broken no laws. Pilate says "Are you the Christ?" his face angry, beet red. The only reply he receives, "It is as you've said." But the Pharisees want evidence. "If you are the Christ, then show him." On Friday, the rooster crows, just as Peter says, "I do not know him."

On Friday, he wears a crown made of thorns as the disciples run away and Mother Mary mourns. On Friday, he endures forty lashes of the whip, but he knows that from his cup, this is just the first sip. With the crowd still unsatisfied and Pilate at a loss, on Friday, they force him to carry his own cross. His mind becomes hazy, his senses become dull, inching ever closer to Golgotha, the place they call "Skull."

On Friday, after stumbling his way through the street, he's fixed up on that cross, nails in hands, nails in feet. Two thieves on either side of him, one to the left and one to the right, and even on Friday, he leads one of them to the Light. Pierced through his side, blood and water hit the ground. He cries out, "Eloi!" but his Father makes no sound.

On Friday, the pain would not be diminished, until the ninth hour when he finally cries out, "It. is. FINISHED."

On Friday, he dies, and the pain of loss is numbing. But the weekend ain't over. Sunday is coming. 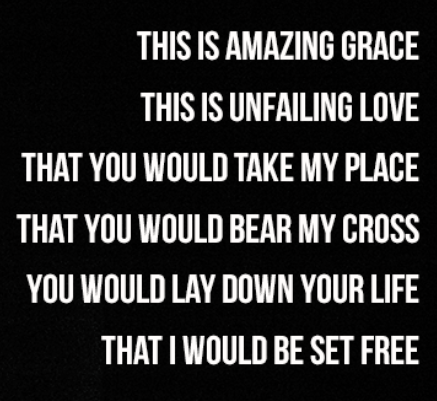 Jesus, I sing for all that you've done for me.