Monday, you have been bested.

First thing I did this morning was throw on clothes and go outside to say goodbye to this kid. 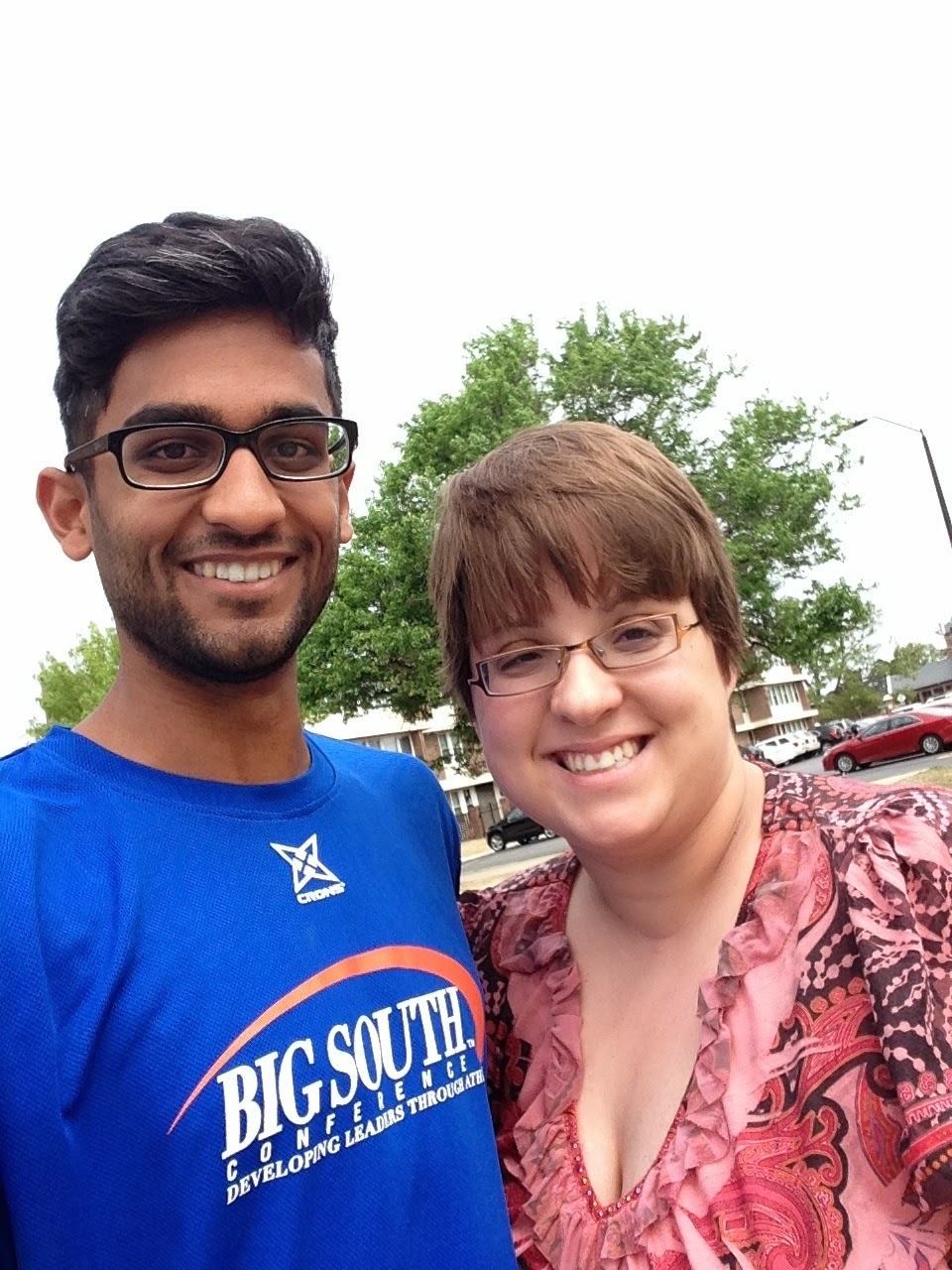 Chirag!  He ran over in between finals just to see me for a quick minute.  I hate saying goodbye to people (I believe we've discussed that already, ha!), but it seriously made my day that he ran over here just because he knew it meant a lot to me and would make me happy.  Chirag was one of the first ones to take me into the group and take on the role of my big brother and make me feel included, and this gave me an opportunity to tell him in person how much I appreciated everything he and the other guys did for me this year.  I'm so gonna miss him, but it put a huge grin on my face to see him one last time.

Then I ate lunch and headed off to my exit exams.  First up: French.  It was hard.  But I survived.  Just super thankful it doesn't actually count for anything and is just for the accreditation council and all that.  And Pam and I both finished in time to take some pictures before I had to go the next one. 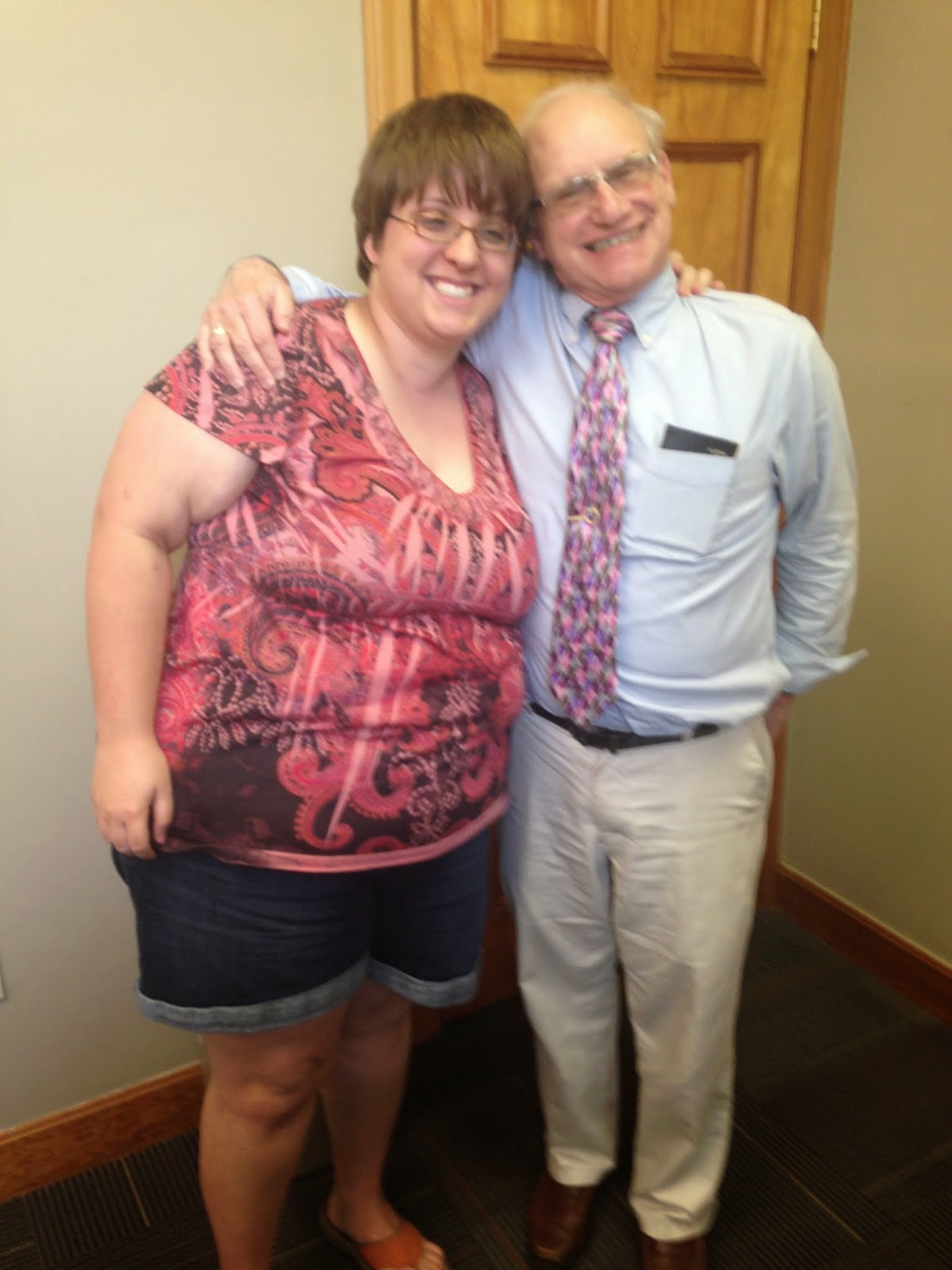 There are few people on this earth that I respect more than I respect this man right here.  Dr. Steegar is a gem.  Also, I asked him to smile because he normally doesn't - that cheesin' face cracks me up!  He is precious. I didn't know Pam got a picture of me hugging him, but I'm glad she did. :) 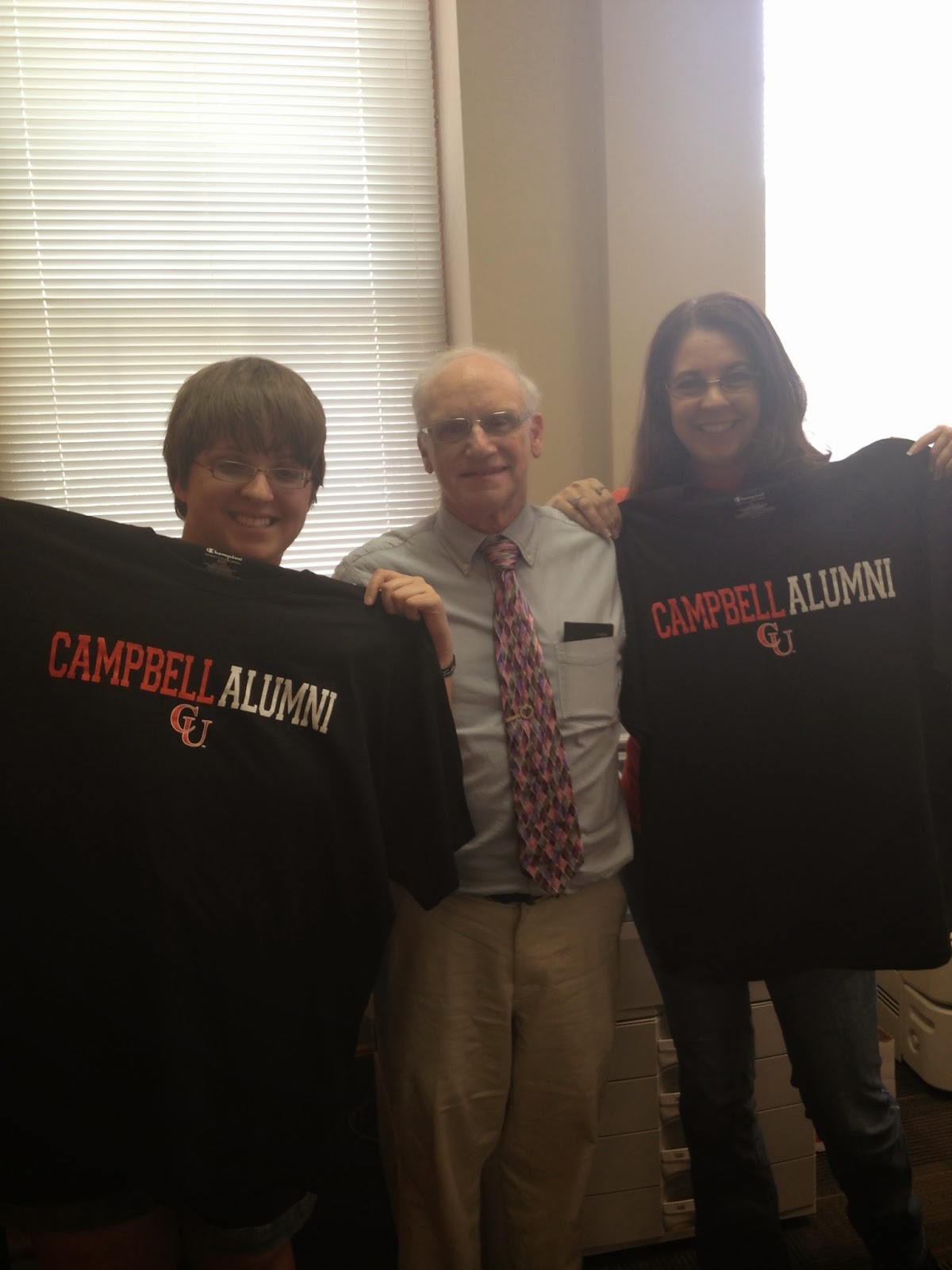 Pam bought me that Campbell Alumni tee as a surprise gift.  I loved it! 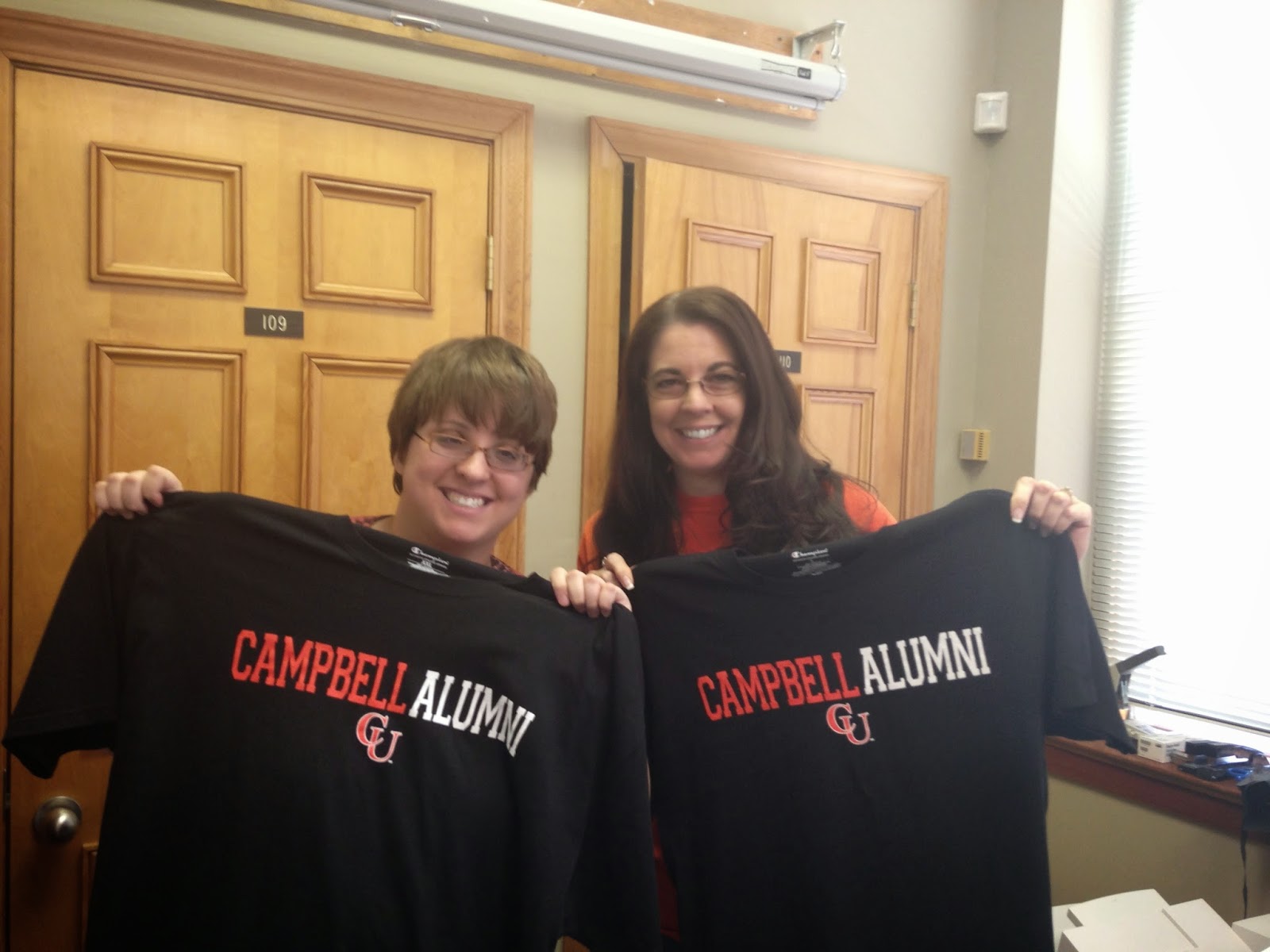 We would not have made it through this last year without each other.  I wish Ryann were here, but since she can't be, Pam filled the role nicely. :)

After that was the Political Science exit exam which was tedious and absurdly long.  First we had a senior survey which was mostly normal and then had these bizarre questions about asking us to define a Christian worldview and to write about the pros and cons of capital punishment with what our Constitution says and groups that might have a stake in the policy.  There were two sections, an hour each.  The dumb part was that we weren't allowed to start the second section until the first hour was up, no matter what time we finished the first section.  So I sat outside for like 35 minutes with most of the rest of the group talking about how ridiculous it was.  But I finished about 5:00.  The second section, same length as the first, only took me 20 minutes.  Ha!

I probably rushed through it a bit, though, (thankfully it's only for accreditation, too) because I knew that as soon as I finished I could get my big Senior Capstone Seminar paper back.  Remember that?  The 58-page, 17,334-word monster of a paper that I finished a couple weeks ago?  Yep, Dr. Thornton emailed us all this morning and told us we'd get them back this afternoon after the exam.  My grade?  485 out of 500!!!!  I am SO stoked.  That's a 97 if you don't want to do the math (or you have grad school brain fog, to a certain someone in particular, haha).  And I got a 97 in the class overall.  So yay!  I was giddy.

Then, on the way back to my room, I ran into a couple more soccer boys, which was an absolute gift because I don't think I'll get to see them again before we all leave. 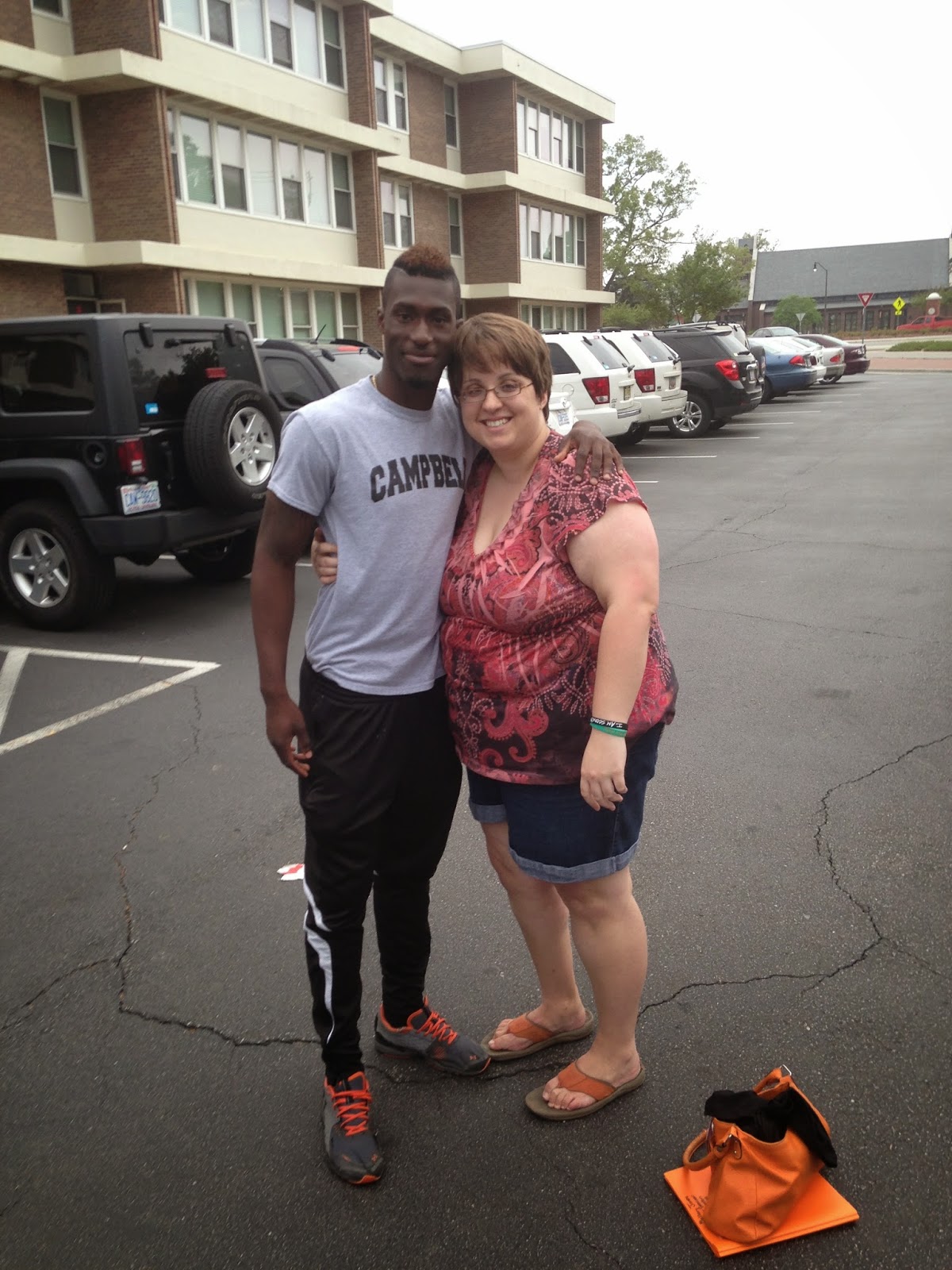 Reafe!  One of the sweetest boys I met this year.  He's so kind and so protective.  There's never been a second of doubt between us; we have each other's backs no matter what.  And also, he really loves me, because he always smiles in pictures with me even though he hates it. ;) 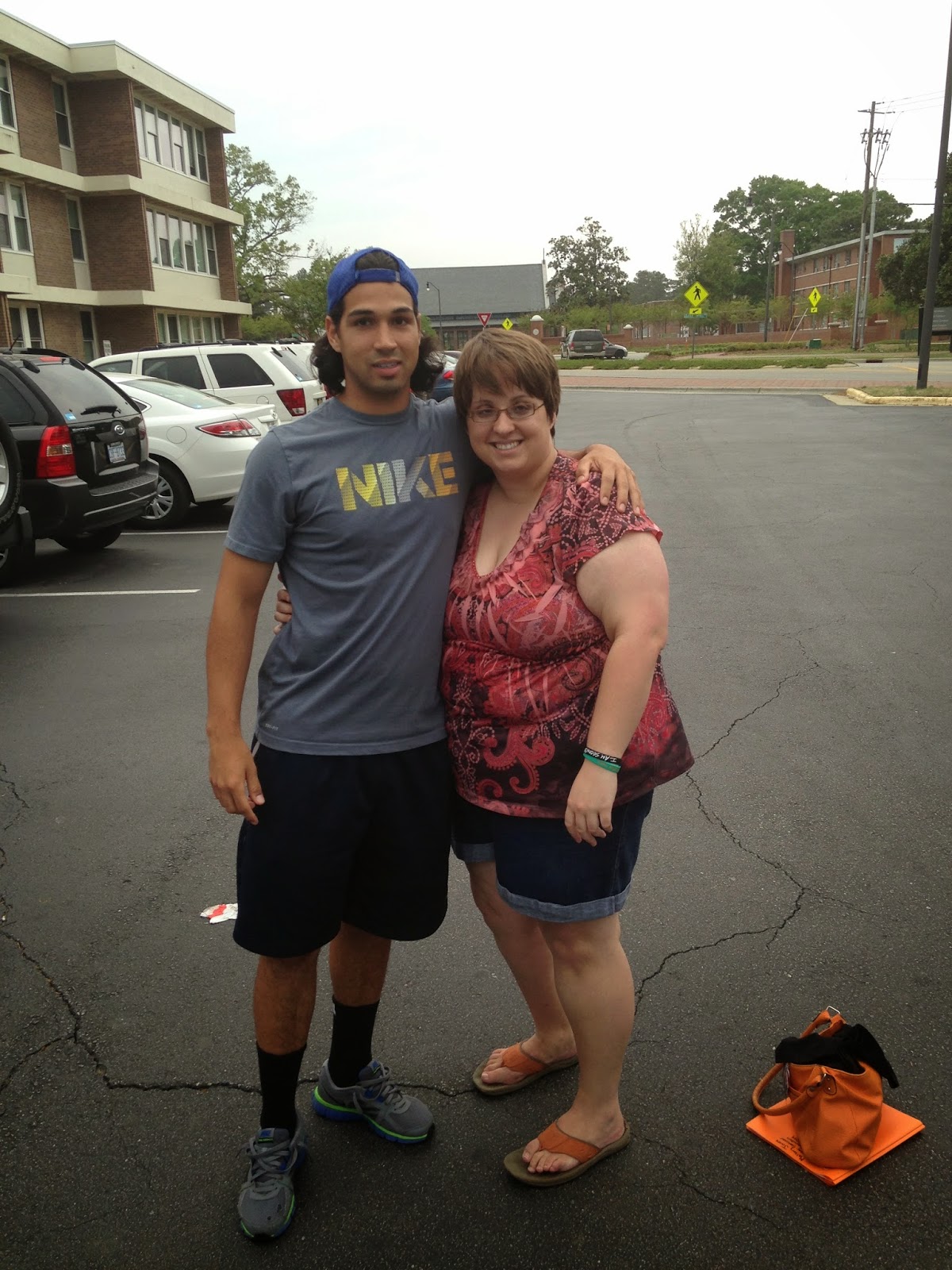 This is Martinez.  His first name's Matt, but there are two freshmen named Matt, so they both get called by their last names so people can differentiate.  Martinez and Mozynski.  Since he's a freshmen and I only met him last month at the spring game, we didn't get a chance to really get to know each other, but he still treated me like family.  It's as if the other guys told him "This is Mal. She's one of us, our sister." and he just took it and said "Okay then."

I hate saying goodbye, but honestly, today I'm so much more focused on the fact that I have all these incredible people to say goodbye to.  I am so blessed to have such an incredible family here that I know will miss me as much as I will miss them.  College was so much better than I imagined it would be before I started.

I spent the rest of the night working on my essays for tomorrow's real exams (meaning they actually count), and I still have one to go.  And it's almost midnight.  Oy.

I was stressed about making it through today because my head was in really bad shape before I headed to the exams, but I think it's safe to say that I bested Monday.

Hopefully, tomorrow evening, I can say the same for Tuesday and celebrate FINISHING MY UNDERGRADUATE EDUCATION!!!! :)

My celebration will involve a long hot shower, cozy pajamas, Glee, and then falling into a deep, hard sleep for many hours.  Sounds like a win to me.