I should be working on my paper tonight, but I'm so tired I'm seriously about to fall asleep here in my recliner, so I'm just going to go to bed and set an alarm for 7 am and get up and work then once I've gotten some rest.

I wasn't rested last night because after staying up late working on the paper, I got up at 8:00 so I could go track this kid down. 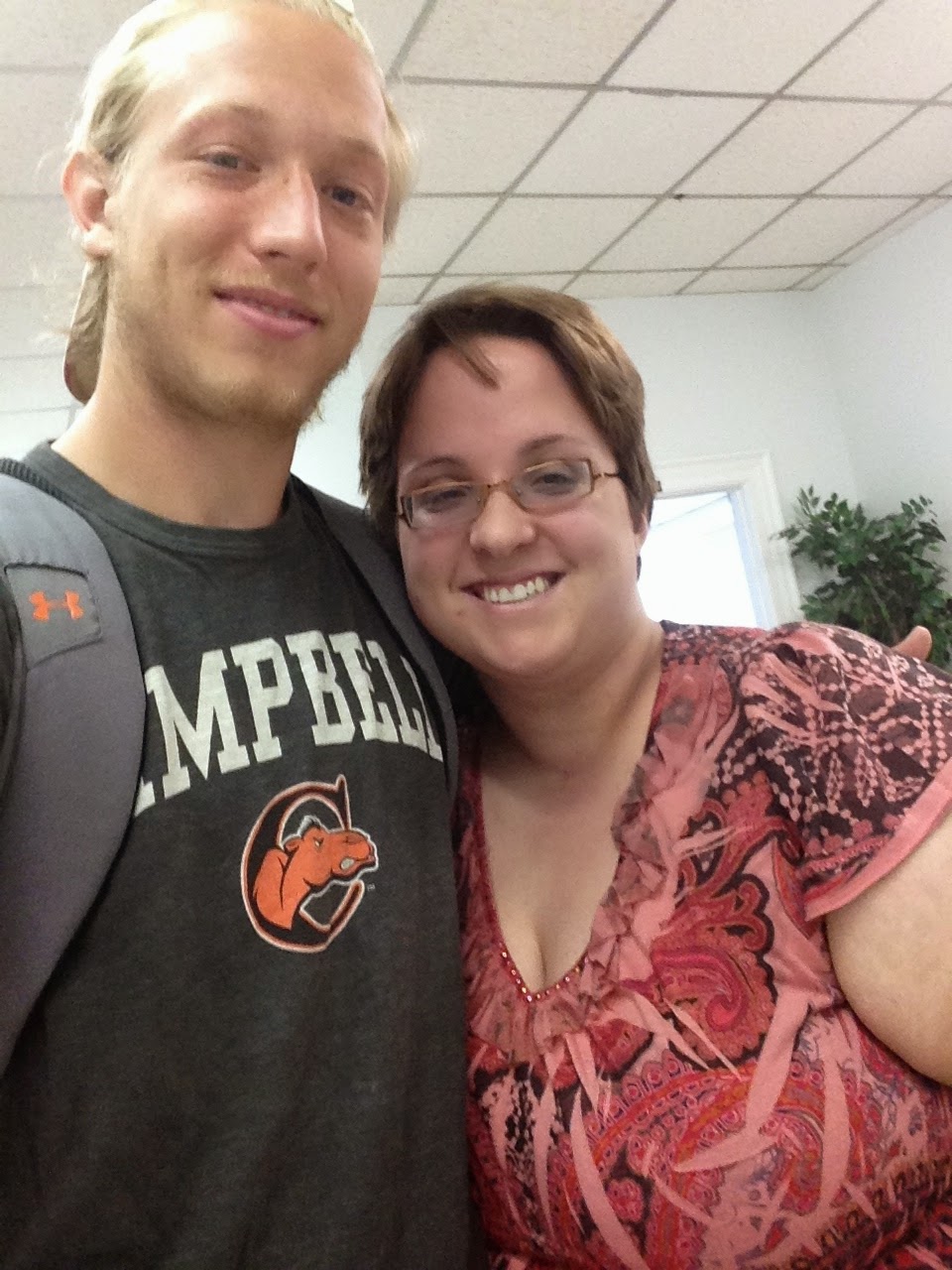 As cheesy as it is, I was really nervous that I wouldn't get to see Bryce again before the end of the semester.  Plus, considering he was the conduit for me getting to meet and get to know all the crazy boys I call my soccer brothers, my ball legit did not feel complete without his signature on it.  Since all of the departments in this school are pretty small, a lot of the Reformation boys have other classes with him.  So I knew how to track him down this morning.  He had to get to practice so we only had like two minutes, but it was enough for the ball and the picture and for him to thank me for the letter and give me a big hug.  I'm not sure what my senior year would've looked like without him, considering not only is he how I met the soccer boys, he was my one friendly face walking into Reformation.  He's one of the biggest surprises God had for me here.

After that, I went to the room where I have Political Thought and hung out until class.

After class, I went to lunch with Ricky and Nicole.  I have eaten in our cafeteria more times in the past two weeks than I have in the past two years combined just for these soccer boys.  Ha!  But one cool thing, aside from hanging out with those two, was I actually got to meet a soccer boy I somehow hadn't ever met before today, Julian. Of course I got a picture with him!  And I got him to sign the ball, too, haha, since I still had it with me.  He, Ricky, and Nicole had fun laughing at some of the other guys' signatures.  He's very sweet.  He had to cut out early to go to class, but I stayed and talked to Ricky and Nicole for a bit longer.  Nicole started asking me medical questions, and Ricky just sat there and listened.  He is so protective of me in the most adorable way.  I was eating an ice cream cone on the way out, and even though the stairs out of the cafeteria have a railing, he grabbed my hand so he could help me down the stairs.

After that, I killed time until French, per usual.  French was hilarious, per usual.

I unexpectedly ended up going to the Oasis to have dinner with Zack tonight, but then we ran into Reafe, who I rarely ever see anymore, so we ended up having dinner with him and Tunji.

These three...they're crazy.  But they certainly make for an entertaining dinner date.

Dinner lasted way longer than expected because I got so caught up talking to Reafe and Tunji (Zack cut out early), but it was worth it.  Reafe and I walked back from the Oasis as Tunji went to work and got to talking about my friendship with all of the boys.  I saw how much they really do love me, through what he and I talked about and what he and Zack talked about as we were waiting for Tunji to get his food.  They have my back, no matter what, and they know I have theirs.

Time to hopefully get some solid rest.

(Side note: I'm talking to a former Campbell soccer boy after I just added him when he commented on the photo of me and Bryce on Facebook...even he knew who I was. Hilarious.  Make me feel famous!)