This is a political science major's Hollywood.

Or maybe it's just mine.

However, it is now 10:30 pm which means I have been awake for 16.5 hours.  Today was crazy.  So you're getting the speed recap of the awesome things that happened tonight.

I found out there's a chance I could get to meet the cast of NCIS before the summer is up, which would be ridiculously awesome!

I got to go to my first work-related event.  I feel like such an adult saying that!

I met lots of Sailors from the US Navy, and I learned about some different jobs and their uniforms.

I met a US Congressman, which had never happened before.  And the coolest part was he's from NC and serves the district directly south of my hometown!

I got to watch the Japanese Ambassador to the US speak.  (I wish I could've introduced myself to him, but he was always talking to someone.)

I met Admiral Ray Mabus, aka THE SECRETARY OF THE UNITED STATES NAVY.  I got to shake his hand and have a conversation with him! 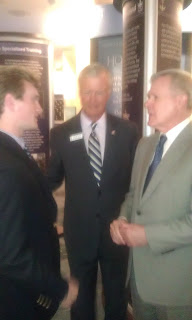 Tyler (the other intern I've never shown you a picture of before), Admiral Totushek (President of the Navy Memorial, really nice and wears an awesome leather jacket during the day!), and the Secretary. 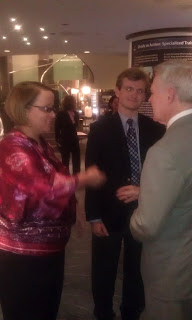 Me about to shake the Secretary's hand. 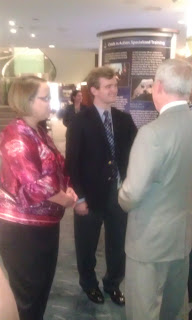 The four of us having a conversation. 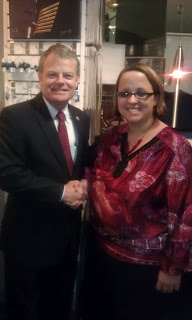 Me with Representative Mike McIntyre.  He was nice.  And I love that I can now say I've actually met a member of Congress!  Maybe I'll get to meet some more when Natalie, my mentor, gives me a tour of the Capitol.  :)

Oh, and also, I was asked not to blog about the roommates anymore, so that will no longer be a topic of discussion on this blog. I'll be fine.  If nothing else, this is over in six weeks, and if I can survive living with Chelsea for 20 years, I can survive living with four strangers for six more weeks.  Okay I'm done. Just wanted to let you know that so you didn't think I was ignoring giving an update on the situation. Like I said, it'll be fine. It's a long story, but after much prayer today, I have found a new sense of confidence in myself to try and work through all of this with them. I was also told by someone to have more faith in myself. Confidence is key, or so I've been told. ;)

Okay, I really am going to bed now.  I can't wait to sleep!

I LOVE TFAS. :) Tomorrow = the Federal Reserve. Their security seems like it's tighter than the White House, which I find hilarious.