A Continuance: That's what faith is for.

I wasn't expecting to write a second part to my post from last night, but hey, that's what happens when you're blessed with wise friends who are willing to help you figure things out.  Special shout out to Taylor and Laura A for stepping up, speaking the truth, but being kind about it.  I needed help, and you two showed up.  I'm so blessed to have you in my life.

Yeah, uh, I came to realize today that in all of my ranting last night, there's a pretty big factor I managed to leave out:  I don't know for sure that anything of what I said about where my dad ended up is true.

How could I have been arrogant enough to claim to know what my dad's relationship with God was like when I don't even remember what his relationship with me was like?  Yes, my mom has told me that he wasn't a practicing Christian, and that he basically never went to church when she took us girls on Sundays (but he did work constantly, so there's that to consider), but I don't know what his relationship with God was like in his head and heart, if/when he prayed.  My mom couldn't have known that, either, especially since suffice it to say that she and my dad did not have a good marriage.  I didn't see him in the last few months before he died.  I have absolutely no recollection of my last conversations with him.  I have no idea if in his heart he believed in God.

Even more than that, though, I have NO clue whatsoever as to whether God decided to bring him to heaven after he died.  And it's not my job to know.  I CAN'T know that.  That's why God is God, and I am not.  Just like my relationship with Christ is mine, my dad's relationship with Christ was his and his alone.  I am honestly ashamed that I was conceited enough to think I knew the answer to a question of eternity.

I've made it no secret that as of right now, I am the only one in my family that is pursuing a relationship with Christ.  During our conversation today, whether or not he intended to, Taylor pointed out that I had also, in my arrogance, assumed that I knew where my mom, sisters, and grandma are going to end up, and they're not even dead yet.  As Taylor put it, God may have put me in this family for the sole purpose of bringing them on a journey to Him.  For all I know, my grandma could have a religious epiphany on her deathbed.  The point is I'm never going to know until it happens, just like everyone else.

But here's the important part: It's okay that I don't know.  It doesn't make me clueless or stupid.  I don't have to know.  That's what faith is for.  He knows, and that's all that matters because, in the end, His will is the only thing that is going to make things happen.

No matter what happened to my dad, I know I love him, and I know he loves me. And God loves both of us  so much more.  I'm going to focus on the knowledge that I was his angel, his "Sweet Pea", that I always managed to surprise him with what I would say and do as a little (and I mean little!) kid, that he loved to speed down exit ramps just to make my sisters and me scream with excitement.  I'm going to focus on pictures like this. 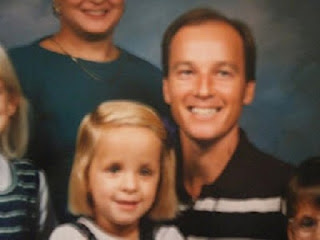 Because they make my heart happy.  And my life is too short and too miraculous to waste time on sadness.

Labels: friends, God, me, my dad