It's not about me.

So I was sitting here trying to decide what to blog about, and this idea just popped in my head and all sorts of thoughts started pouring in, so I'm going to go with it.

The thing about having a public blog is that anyone can find them.  And I mean anyone.  Like Sarah, the girl who was in marching band with Holly in high school and ended up picking me up at the airport after my Nashville trip.  How completely random is that?!  But the most complicated part about it, at least for me, is that blogs are just a highlight reel of the writer's life.  Believe it or not, there's a LOT I don't put on this page. I keep plenty of secrets.  Everyone does.  I've hid a lot over the years because I was too scared to put it all out there.

Now, though?  I'm not going to lie:  My life is pretty awesome right now.  It's finally everything Matt promised me it would be once I got out of that small little town and got to college.  I'm getting to do some ridiculously cool things that most people only dream about (pictures from today will be at the bottom of the post).  I have so many friends that are the kind that stick with you for life, something I never thought would happen with anyone other than Matt.  I am totally aware every day just how much God has blessed me by putting me right where I am, physically and mentally.

BUT sometimes I feel like if a complete stranger found my blog one day and started reading the most recent posts, they might get this idea that I'm posting what I have because I want to brag about how awesome my life is.  And that is not it at all.  I mean, those of you who have read here for a while know what I have been through over the 3+ years that I've had this blog, but that fact won't mean anything to someone who doesn't know.

And let's face it, the posts I've made about getting to spend my birthday at the Memorials around the city, and meeting the Secretary of the Navy last night, can easily be construed as bragging. Even reading them myself, I can sometimes feel that kind of tone. I can only hope and pray that the people who read my posts either know my heart enough already or will take the time to get to know my heart to know that I am not that person. I truly hope and pray that I never become that person. I know what it's like to have the threat of losing every dream you had hanging over your head, and so frankly, I'm in awe that in less than 3 years I've gone from a girl who spent basically an entire fall in a hospital bed to a girl who's living and working in DC meeting people that help run this country, who got to skip school for a week and fly out to hang with some of her dearest friends and favorite band. If you had told me that 2012 would turn out like this when I was laying in Duke, or giving myself antibiotics twice a day for the staph infection in my foot, I would've thought you were crazy. I had pretty much given up all hope of having a normal life.

I'm living my dream, y'all, and there's nothing I could have ever done to deserve a blessing like this. In fact, my human mind can't even comprehend how God would still want to bless me like this after I spent so many years hating Him and blaming Him for all of my pain. But if there's anything that I want people to take away from the words I leave on this site is that this doesn't just happen to me. God wants to work these kinds of life-altering miracles in your life, too. Whether or not you know Him, He knows you and He loves you SO much. I had nothing to do with God for pretty much my entire high school life, but looking back, there were so many things that happened that set me up to get me not only to Campbell, but to this program. He was still paying attention.

My life is just an example. I am nothing more than a living testimony for His grace, forgiveness, and love. He doesn't love me anymore than He loves you, I promise. No matter what your relationship (or lack thereof) with Him has been, His love doesn't change. He brought me out of some scarily dark years to a point where I feel on top of the world. The knowledge I have of the incomprehensible depth of His love is what gets me through the bad days because, I promise, I still have plenty of those. Being a Christian and having a relationship with Christ doesn't mean that your life suddenly turns magical and all is perfect in the world. People are still mean, bad things happen, you cry, you get mad, you're still human. It just means that through your relationship with Him, He will take everything you've been through and turn it into something more beautiful than any human could ever imagine or create themselves. He wants to know you, intimately, passionately, deeply. He sure as heck wanted to know me. He had to pretty much chase me down to get me to where I am now. God's love is that great; He's willing to do whatever it takes to bring you back where you belong.

So please, when you read what I have to say on this blog (and I still can't figure out why anyone still does), know that my life is far from perfect, and that my life, my words, my story? They were never about me. They're about Him. They're about this new Mallory that He created and is molding out of the ashes that were my life such a short time ago. It's my job to do something with it. All of this is happening so I can show anyone and everyone I meet what He has done for me, and to tell them He can do it in their lives, too. Because HE CAN.

And He will, if you're willing to give up control and let Him. It's not going to be quick, and it's not going to be easy, and sometimes it's going to hurt like hell. I, control freak extraordinaire, can tell you that for a fact. But this I can also promise you:

It will be worth it. 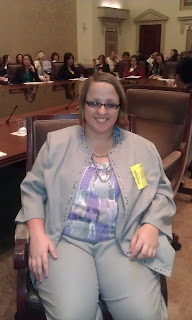 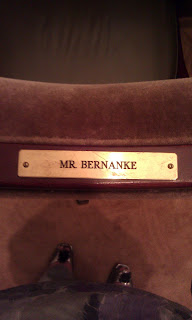 That's me, sitting in Ben Bernanke's chair.  Ben Bernanke is the Chairman of the Federal Reserve.