I got up at 6:30, got all dressed up, and spent 40 minutes trying to get a cab with some new friends to the place where all the cool kids spend their Saturday mornings. 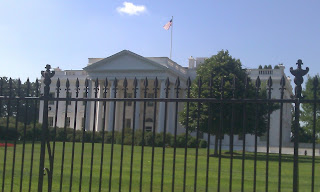 Seeing as I'm a complete dork, I pretty much had goosebumps from the time we got to the first security checkpoint to the time we stood at the back gate letting some TFAS worker take photographs.  Walking those halls and knowing all of the historical figures and celebrities that have walked those same halls was just a ridiculously awesome feeling.

The only lame part was that this was a "closed tour" so we weren't allowed to take pictures inside.  We basically weren't allowed to bring anything but our IDs and wallets and phones.  (These pics were taken on my phone outside where it was allowed.)  The weird part is that one of the Secret Service guys told us that they actually have "open house tours" which is the exact same tour except you're allowed to take pictures.  I don't know why TFAS didn't bring us on one of those days, but whatever.  I was there! 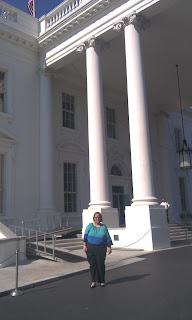 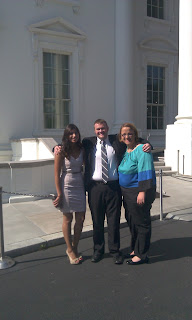 This is Josie, Chris and me.  We basically met each other on Facebook, agreed to split a cab, and then met for real this morning.  Yay for a TFAS Facebook group.  We ended up getting a van cab with a few other kids but hung out together through the tour pretty much because it was nice to have someone to walk around with. 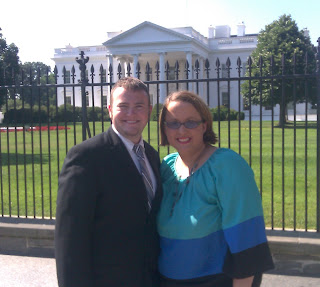 Then a whole crowd of us walked down the street to this place called Cosi and got something to eat.  Then, Chris, Josie and I split a cab back to campus.  Josie said she felt like a girl from Sex and the City, standing on the corner in heels waving down a cab.  Haha she seemed really nice. :)  Chris was awesome, too.

I got back to the apartment and promptly changed clothes and passed out for two hours.  It felt awesome.  That is why you don't go to bed at 1:45 when you have to get up at 6:30 the next morning.  I got up around 2:15, and then just hung out until I met up with Chris again about 3:50 to go to a barbecue for TFAS's alumni weekend.

I had SO much fun there.  I met tons of cool people and even made new friends to hang out with who seemed to really like me.  I spent a lot of time dancing with this kid. 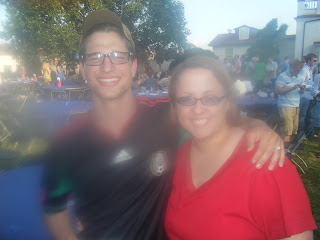 I don't know why the picture looks like that.  My camera's been doing weird things lately.  Maybe it's just old.  I think I'm going to use my phone for pics from now on, though, because this one sucks.

His name is Michael, and no, it was NOT that kind of dancing! ;)  He saw me sitting on a bench by myself and asked me why I wasn't hanging out with friends or my roommates or something.  I quickly said the guy I came with had to leave, and my roommates don't like me very much, and then he made me tell him what I meant by they don't like me.  He offered to give them a "good talkin' to" which I thought was hilarious of him to say since he's from Chicago and he'd just met me like ten minutes before.  Then we basically spent the next hour acting like complete goofballs and dancing, and he brought me around and introduced me to a bunch of his friends.

Around 7:00 I started getting really worn out and hot, so I left.  I ended up getting really lightheaded and almost passing out on the way back to the apartment, but these two girls helped me out and one of them found two guys willing to help walk me back to my dorm because my legs were shaking pretty badly.  Don't worry, I was fine after a few minutes of being in my room with the fan and some cold water, it's just part of having a seizure disorder.

So long story short, my roommates may not be all that fantastic of people, but there are a lot of amazing people here.  I'm getting to do things this summer that some people only dream about.  How on earth can I complain? :)