I think I have a new talent.

That talent is getting free CDs from bands.

Then again, maybe it's just sheer luck. But either way, it's still pretty awesome.

Today, Campbell actually brought something fun to CUW. The entire session today was a folk band, The Vespers, playing for us. They're from Nashville. Two sisters, Callie (20) and Phoebe (18) Cryar, and two brothers, Taylor (21) and Bruno (19) Jones.

They. were. AWESOME. I don't even like folk music and I loved them! Callie and Phoebe have beautiful, soulful, chill-inducing voices, and they are all insanely talented on tons of different instruments! Seriously, in today's 45-minute show, there were drums, an electric bass, an upright bass, guitars (Bruno, Callie, and Phoebe all played this at one point or another), a ukulele, a mandolin, and a banjo. Plus, on their CD, they use an accordion, a piano, an electric guitar, a hammered dulcimer (whatever that is), a trumpet, and a glockenspiel. Yes, a freakin' glockenspiel. And they're all basically my age! I am in awe.

So as I was trying to get into CUW from US History (which are thankfully in the same building) the hallway outside the auditorium was crowded, so I was just standing back letting people go in. Turns out, I was standing next to Bruno. We talked for a few minutes, nothing special, and I took a picture with him, and then he brought Taylor, Callie and Phoebe over and they all took a picture with me. 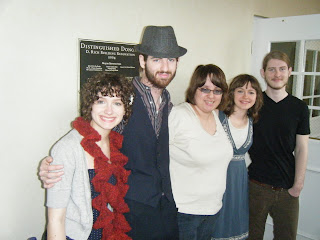 Phoebe, Taylor, me, Callie, and Bruno.  Aren't they cute?!﻿
Then, after the show, because of the location of my (assigned) seat, I was pretty much the last person out of the auditorium, and I spoke to Callie for a while. She was so sweet! I wished I hadn't had class at 11, or I definitely would've stayed and talked to them some more. I told Callie and Bruno that I didn't have money with me, but as soon as I got some I would order their CD from their site.

Well, after my 11:00 class, I went over to Marshbanks like I usually do for lunch. Who was the first person I saw in the meal line? Taylor. (He's really tall - he's kinda hard to miss.) I started talking to him while we were getting food about how awesome the show was, and he was talking about what a blessing it is to get to perform for a living. I asked him if I could sit with him and the others because I didn't have anyone to sit with, and he said sure. (Nice people!)

It was a packed table (11 people at a table made for 6), so I ended up at an end kinda smashed between Bruno and an old friend of mine, Taylor Cashwell, who now works at Campbell. Taylor mentioned that I was getting around nicely, and I said that I was so glad to be out of the power chair, and Taylor Jones (who was sitting on the other side of Bruno) asked me about it, so I had to explain about the foot surgeries and such. That turned into a crazy in-depth convo with Bruno (we were practically sitting on top of each other, so I guess it was natural that we talked to each other the most) about my story and testimony. He was very flattering and very sweet. He said I humbled him because any healthy person easily takes their health for granted, and that he believes that "God has big, big plans in store for me" (not sure how he felt that from our conversation, but it was still very sweet). And since the picture I had gotten with him before CUW had no flash and thus was really crappy, he took another picture with me. :) 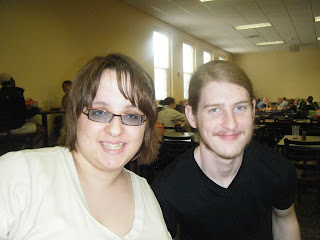 Anyway, this is a lot of rambling to get to the part about the CD, but I also want to document this morning for my own memories. So anyway, during lunch, various students came up to the band and asked them to autograph their CDs. Of course, the band always did. After a while, I said to Bruno, "I don't have a CD, but I might just have to get your autographs anyway." Well, earlier, I had seen a few CDs stacked on the table, but I didn't know what they were there for. When I said that, though, Bruno picked up one of the CDs, handed it to me and said, "Here. You can have it." :O I was like "Really? Are you sure? This is how you guys make money, and you need money on tour, and ---" and then he cut me off and said, "Yeah. It's totally fine. We made way more than average this morning. Take it!" and kinda shoved it in my hands, then proceeded to open it for me when I couldn't get the plastic off and everyone signed it. I thanked him profusely. :) I tell ya, people like this just warm my heart. They remind me that maybe there are still good people in the world. ;) 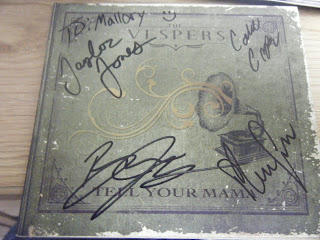 Oh, and a shameless plug for my new friends: Check them out on Facebook as The Vespers, at twitter.com/thevespers, or at their website thevespersband.com :)

Then, tonight, I had another study session with Tyler, and he made me smile and laugh the entire time. So tonight was pretty awesome, too.