Whose state? OUR STATE!

The paradox of a retail job: there was basically a constant string of customers from the second I started at 4 this afternoon until around 10, yet time seemed to go by so slowly. And I didn't even get to finish my 15 minute break because a new string of them came in around 10:20. Who knew so many people liked to go to Walgreens late at night? I only got yelled at one guy today, who was furious that they changed the pharmacy hours...I don't think he thought I could do anything about it, I was just the only person that was there. I tried to tell him there was a 24-hour pharmacy a block away but he wasn't hearing it.

And it's girl-problems week so I just am really not feeling like myself. It feels like if I've not been at work, I've been asleep, and it's been that way for several days now. I am not a fan.

My coworkers are awesome. I know I've said that before. The manager on tonight, I used to think she didn't like me, she kind of intimidates me (yeah, I didn't know that could happen either, ha!), but there were moments where she actually did seem to like me tonight. So I don't know what to think.

Oh, and there was this small little other thing that happened while I was at work... 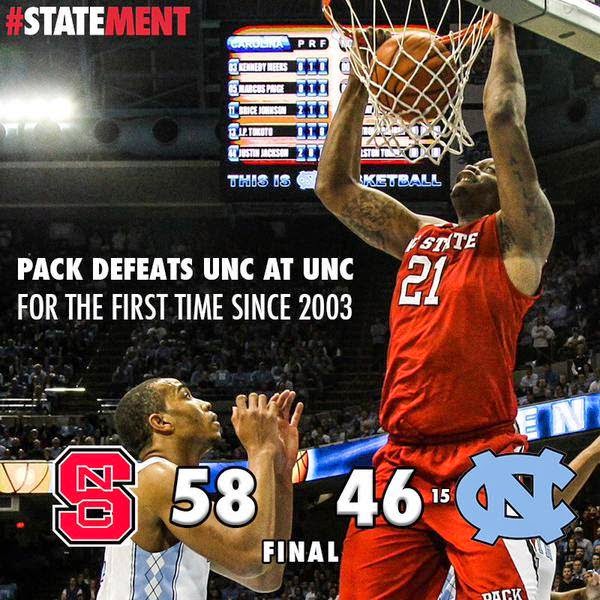 Lowest point total for UNC EVER in the history of their Dean Smith Center (Dean Smith also happens to be the legendary former UNC coach that passed away recently).

First Wolfpack win at UNC since good ol' boy Roy became the coach (he's, uh, shall we say, not anywhere close to as beloved as Dean Smith).

And to boot, this is another upset against a ranked team we can claim as a young, ranked, deemed "unimportant, not a rival or a threat" team.

So many things about this win make it epic.

I may or may not have had Holly call me at work as soon as the game was over. ;) Come on, it was an important event!