I believe, Lord, help my unbelief.

God is SO awesome.

Remember how, back at the end of December, my life collided with a man named Chris Plekenpol through a YouTube video and a Google search?  Remember how I promised you then that that wouldn't be the last you'd hear of him?  Yeah, I kept that promise. :)

After getting that very discouraging call from my doctor on Tuesday, I felt the urge to text Chris and see if there was a time we could chat so I could get his wisdom on the whole situation.  The first time we spoke, I knew so certainly that God was using Chris to get my attention, and for some reason, I felt sure the second time would be the same way.  So we made plans to talk today.

I gave him an update on the whole situation, the constant pain, how the doctors say they don't know what to do, and the reaction I've had to it all.  The very first thing he said when I was done was, "Do you have your Bible with you?"  I did, and he told me to go to 2 Corinthians 12 and read him verses 7-12.  I'm only putting 7-10 here. (emphasis mine)

To keep me from becoming conceited because of these surpassingly great revelations, there was given me a thorn in my flesh, a messenger of Satan, to torment me.  Three times I pleaded with the Lord to take it away from me.  But he said to me, "My grace is sufficient for you, for my power is made perfect in weakness."  Therefore I will boast all the more gladly about my weaknesses, so that Christ's power may rest on me.  That is why, for Christ's sake, I delight in weaknesses, in insults, in hardships, in persecutions, in difficulties.  For when I am weak, then I am strong.

God's power is being made perfect in my weakness, my pain, and in the doctors' weakness, their inability to find a cure. But His grace IS sufficient; I don't need a perfectly working body or even just a life without migraines to make it through this life.  All I need is Jesus, and I already have him.  When I am at my weakest, I am at the point where I can be filled entirely with His strength.

When they came to the other disciples, they saw a large crowd around the, and the teachers of the law arguing with them.  As soon as all the people saw Jesus, they were overwhelmed with wonder and ran to greet him.  "What are you arguing with them about?" he asked.  A man in the crowd answered, "Teacher, I brought you my son, who is possessed by a spirit that has robbed him of speech.  Whenever it seizes him, it throws him to the ground.  He foams at the mouth, gnashes his teeth, and becomes rigid.  I asked your disciples to drive out the spirit, but they could not."  "O unbelieving generation," Jesus replied, "how long shall I stay with you?  How long shall I put up with you?  Bring the boy to me."  So they brought him.  When the spirit saw Jesus, it immediately threw the boy into a convulsion.  He fell to the ground and rolled around, foaming at the mouth.  Jesus asked the boy's father, "How long has he been like this?"  "From childhood," he answered.  "It has often thrown him into fire or water to kill him.  But if you can do anything, take pity on us and help us."  "'If you can'?" said Jesus. "Everything is possible for him who believes."  Immediately the boy's father exclaimed, "I do believe; help me overcome my unbelief."  When Jesus saw that a crowd was running to the scene, he rebuked the spirit.  "You deaf and mute spirit," he said, "I command you, come out of him and never enter him again."  The spirit shrieked, convulsed him violently, and came out.  The boy looked so much like a corpse that many said, "He's dead."  But Jesus took him by the hand and lifted him to his feet, and he stood up.  After Jesus had gone indoors, his disciples asked him privately, "Why couldn't we drive him out?"  He replied, "This kind can come out only by prayer."

Chris's words for me after this were something that I'd heard many times before from various friends (Kyla, Caitie, Brennan, Taylor).  You know how sometimes you can hear something several times and you get it and you know the person saying it is right, but for one reason or another, you never follow through on what they say?   Yeah, that was me.  But the way Chris said it today, or just God's hand on the timing of it all, made it really stick.  Chris told me that this was the time for me to become much more intimate with God.  God is using this affliction to draw me closer to Him.  Then, Chris gave me a challenge; every time I think about my pain, he told me to thank God for it.  I know, thanking God for something so negative as chronic pain seems weird and nearly impossible, but he said I should thank God for it, if only for the reason that it was a reminder to pray to God.  That idea never once occurred to me.  Then, he talked about the "help my unbelief" part and how, as humans, we tend to have no problem believing that God will answer the prayers of  those around us, but we have trouble believing He'll answer ours.  I know that is definitely the case for me.  I feel sure my friends' prayers will be answered, but with this chronic pain?  I have no doubt that God CAN heal me, but I really struggle to believe that He WILL.  Sometimes people calling you out stings but it feels so good at the same time.

Talking to Chris was something I didn't realize how badly I needed it.  It was so convicting and exactly the guidance I needed.  Then, something totally unexpected but so awesome happened.  Chris asked me to "do him a favor" and write him a 500-word summary of sorts of my story of coming to Christ so that he could share it and about the miracles God has performed in my life in his sermon on Sunday.  This is what I wrote.


"I’m 20 years old, but as my mom says, I’ve lived more than a lot of 80 year olds.  My story is one of God’s power and redemption, but most of it happened with me running as far away from God as possible.  It is through that that I learned just how far He will go to capture the hearts of His children.  I stopped believing in God when my dad passed away two days after my 7th birthday. My mom forced my older sisters and I to continue to go to church, join the youth group, and go through Confirmation, and I only complied to avoid the arguments and nagging. After that, my family started to feel like it was coming apart at the seams.  My mom dealt with clinical depression, and one of my sisters was diagnosed with several mental illnesses.  I have numerous health issues and have had 19 surgeries.  I was bullied every day in school, all of which left me greatly depressed. In September 2006, at the age of 14, I got kicked out of my hometown church because kids and adults believed I was faking my seizures for attention. I thought about suicide daily but never attempted it.  Instead of going to college in August 2009, I had six brain surgeries that left my doctors at Duke saying, “I have no idea how you survived this.”  It wasn’t until the next fall, after I had 3 foot surgeries and “cheated death” one more time that I broke.  I had been trying to survive on my own. I knew if I kept going, I was going to kill myself, whether I intended to or not. I knew there had to be a God because doctors said I should be dead. I prayed He would show me the reason for my life story.  Four months later, I met a band called The Vespers and told them about my history.  That was the first day I realized my story could help people.  We became good friends, and knowing them made me want to seek Jesus. I wanted joy. In April 2012, I flew to Nashville to visit them and got baptized there. Now, I fall more in love with God every day, but that doesn’t mean my life is easy. I live with constant pain that doctors can’t fix. I’m the only Christian in my family. But amidst the unknowns, this is what I know: God is who He says He is.  He is good and He is faithful.  I still ask God “Why me?”.  The difference is that where that question used to mean “Why are you doing this to me?”, it now means “Why did you choose to use me?”  I get to show people how I know God is faithful by sharing my story. I am living proof of the depth of His grace.  As 2 Corinthians 12:9-10 says, God’s power is made perfect in my weakness…When I am weak, then I am strong."

I did not see that coming at all, but of course, I said yes.  It's so humbling, and I am so honored.  But the reason it was so cool was because I've been praying for several months now that God would give me a way to take this situation and use it to tell people just how good He really is, and this was the first, in-my-face obvious answer to that prayer.  God proved His faithfulness, helping me to overcome my unbelief.

And tonight I've gotten to have some sweet conversations with Kyla on the phone and Caitie and Taylor via text to tell them about this.  Kyla and I talked at length about the whole thing and all the lessons to be learned from it, and when I hung up the phone, I was reminded again to believe in His faithfulness because He brought me some unbelievably amazing friends who see my intensity and how deeply I love and aren't afraid of it.

I know at my core that God is, indeed, who He says He is, and He's going to carry me through this trial day by day until I come out on the other side with another epic story of His love, mercy, grace, and faithfulness.  I can't wait to see what other opportunities He brings to me where I can tell the world about Him and bring Him the glory He deserves.  It's gonna be an adventure, for sure, but one that I am blessed to be on.

Oh, and on a completely unrelated note, I'm home for Spring Break now, and another huge blessing today was finally getting to see this face in person again. 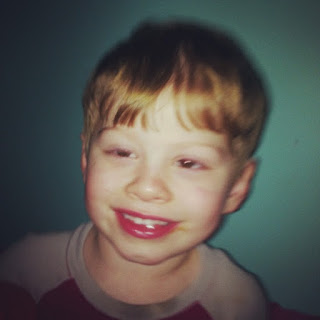