"'GOD SO LOVED THE WORLD,' John writes, 'that he gave his only son, that whoever believes in him should not perish but have eternal life.'  That is to say that God so loved the world that he gave his only son even to this obscene horror; so loved the world that in some ultimately indescribable way and at some ultimately immeasurable cost he gave the world himself.  Out of this terrible death, John says, came eternal life not just in the sense of resurrection to life after death but in the sense of life so precious even this side of death that to live it is to stand with one foot already in eternity.  To participate in the sacrificial life and death of Jesus Christ is to live already in his kingdom.  This is the essence of the Christian message, the heart of the Good news, and it is why the cross has become the chief Christian symbol.  A cross of all things - a guillotine, a gallows - but the cross at the same time as the crossroads of eternity and time, as the place where such a mighty heart was broken that the healing power of God himself could flow through it into a sick and broken world.  It was for this reason that of all the possible words they could have used to describe the day of his death, the word they settled on was 'good.'  Good Friday."

- Frederick Buechner, The Faces of Jesus

A writer I love to follow posted this on Facebook this afternoon, and I thought it sums up so beautifully why a day that is in remembrance of a brutal death is called "good."  This is a question I've heard several non-Christians ask, and it's an understandable reaction for someone who doesn't believe in the sacrifice that was made when Jesus went to the cross.

Good Friday isn't good simply because Jesus died.  Good Friday is good because God sacrificed his perfect child to die like this so none of the rest of us would have to.

Good Friday is good because even in his death, Jesus showed the ultimate love when he cried out, "Forgive them, Father, for they know not what they do."

Good Friday is good because even though the enemy thought Jesus was dying that day, death actually died in his place.

At least, those are some of the reasons why it's good to me.  It's a reminder and a chance to really reflect on a love that is so far beyond my comprehension.  God gave up his child to protect me, and I get to have a real relationship with him.  In my World Religions class, we've discussed several religions where to the adherents, the supreme god is this unreachable, so far off figure that isn't to be bothered.  But my God wants to know me.  He wants to know the people he sacrificed so deeply for.  I am seen, and I am intimately known.

Through some Facebook and YouTube surfing, I came across this recording of a Sanctuary performance from the end of last spring.  I thought one particular verse was so perfect for Good Friday.  The song is "You're Beautiful" by Phil Wickham.

Because he died and rose again, Jesus sits waiting on his throne for God's children to come home to him.  What is more beautiful than the knowledge that he laid down his life for us?  He didn't just die and rise again, Jesus died and rose again for me.  For you.  For my family.  For your family.  For the ones who don't believe.  For the ones labeled lost causes.  For all of us.  Perfect love went to a cross and suffered to ransom me.  I owe him everything, and I'm happy to.

Good Friday is good because the story doesn't end with Friday.  Sunday is coming.

I've posted this song before, but it's something I've been reflecting on a lot today, and I want us all to remember these words as we move through the weekend (and every day, really, but especially this weekend). 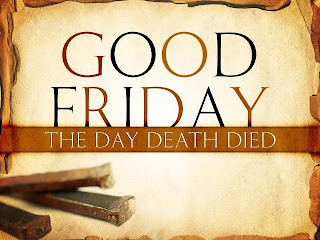