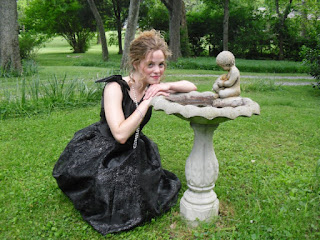 This is Michal.  Her name is pronounced like Michael, and believe it or not, she actually MADE that dress!  (That has nothing to do with everything else I'm about to say, I'm just amazed that I know someone who can make something that pretty.)  Isn't she pretty?

So...you know how I just blogged yesterday about how I have these amazing friends who are like family to me?  Yeah?  Well, this lovely girl right here is officially included in that list.  Earlier tonight, we spent about an hour and 10 minutes on the phone together talking, laughing, and praying, and I can't even begin to explain how good it was for my heart to spend time with her tonight.

You may remember me talking about her in my recap of my epic night at Sanctuary in Nashville as the girl that Joe (Waffles!) introduced me to randomly after she came up and hugged him towards the end of the night.  Well, as it turns out, and I only found out about this a couple weeks ago, she was also the girl who  came up and hugged me right after I got out of the pool.  Apparently I really was in a state of shock that night, I didn't make the connection until she told me!  She later told me she was nervous that I would think she was a freak for coming up and hugging me before even introducing herself, and I told her that no, I didn't say anything because my mind was so overwhelmed I couldn't find words to say to anyone, but it was actually one of the sweetest things a stranger (because she was a stranger at that point) has ever done for me.  Besides, I love hugs.

We've been Facebook friends since the day I got back to North Carolina, but recently we started texting.  Last night, she said we might be able to talk on the phone tonight, so when things started getting particularly nasty around here, I texted her to see if she would be available for a phone chat tonight and be my distraction.  She called a few minutes later, and let me tell you, that conversation was such a gift to me.  Even cooler is that she said she needed a chat like that, too, so God knew what He was doing when He put it on my mind to text her!

I felt so much more at peace by the time we got off the phone (after an hour and ten minutes, my butt was starting to hurt from sitting on my driveway!), and it honestly (and I know I say this a lot) just blows my mind that a friendship this sweet came out of a chance meeting on what happened to be the biggest night of my life.  I felt totally at ease pouring my heart out to her, and through that conversation we both realized that we have quite a few similarities in our personalities!  Honestly, though, the sweetest part about it for me was right at the very end.  She asked if I wanted to pray with her before we got off, and once we did, she said "I love you."

That sounds so simple and small, I know, but it means a lot to me.  Making friends with other girls has never been easy for me, and here's this girl who, all she knows of me is one meeting, is already willing to remind me that not only does God love me, but also that He's put people in my path who love me wholeheartedly, as well.  It couldn't have come at a more interesting time, either, because just days ago, Taylor challenged me to think about why all of my closest confidants are guys (him, Brennan, Matt).  I mean, obviously there's Ryann who is like my sister, but in general, I never seem to really trust girls as much as I trust guys.  I don't usually let myself be as vulnerable when I'm with girls.  And then here comes Michal.  One conversation later, and this girl feels like the sister I wish I had had.  It's insane what God can pull off when He wants to.

Tonight was such good reassurance for me on so many levels.  She was actually the first to comment about how cool it is that God brought us into each other's lives and how much she loves it, us, and me.  God puts exactly the right people in your path at exactly the right moment.  I can already feel in my heart that she is going to be an amazing Christian sister to have at my side, and I know I'm going to learn a lot from her.  I already learned a lot tonight, so I can't wait to see what future conversations hold. :)

Today was just sweet.  Between this and getting to watch some of my dear friends get their diplomas via the online stream of Campbell's graduation, the magnitude of angels that God has put in my life amidst all the craziness is so evident I can't be anything but happy.

Labels: friends, God, me, my baptism