So here's an update:

My foot looks fantastic! :D The doc put staples in the incision on my foot and stitches in the three tiny cuts on my ankle, and once again the staples hurt like crap to be taken out. The gauze was covered in dried blood when the assistant first took the cast off, so that kinda freaked me out because there was nowhere near that much blood on it last time, but she said it was nothing to worry about. Dr. P said that this foot looks even better than the left foot! :D I decided to get a blue cast this time, without really knowing what shade the blue would be, and it turned out great. It's a neon blue, which is pretty much my favorite shade of blue, so that was fun. 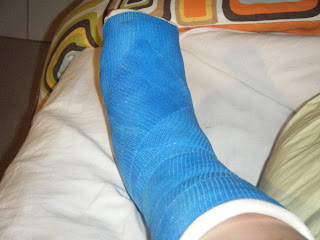 Also, super fantastic news...I'M GETTING A POWER CHAIR FOR SCHOOL!  Mom and I realized a while ago that I just don't have the strength to get around campus on just my scooter, and Uncle Ed (the saint that he is) offered to buy me a power chair and then donate it to the infirmary once I was done with it.  Well, today we found out, after asking him last week, that Dr. P couldn't find anything, so we immediately called the number that my great-aunt had sent me.  Uncle Ed's limit was $3000, and the new power chairs started at $4000, but they had a "used" one for $1299.  Apparently, this chair had been sent out to a Medicare patient, and they just sent it right back for some reason, so it should be in fantastic condition.  After just a little talking on the phone today, we got it ordered with my uncle's credit card info and they assured us that it would be to our house by Saturday, since I leave on Sunday.  Apparently, the delivery people are only half an hour away, so that is just super.  I'm so excited!  This is a HUGE relief!
Tomorrow, I'm going to the movies with Mommom and my cousin Brianna to see Charlie St. Cloud.  I'm really excited to see it.  And Tuesdays are "Stimulus Tuesdays" or something, so you get popcorn and a drink for $1 each.  Which is awesome.
Um...that's about it.  6 days to Campbell! :D