That time I went and lost my mind.

And I can pretty much guarantee you this post will not end the way you expect it to. :)  I can say that because today was so far from what I expected it to be!!

Okay, so it started out kind of rough.  Last night was one of those nights where I couldn't sleep because the pain was so bad, but I also couldn't do anything but lay there, either.  So I didn't get a lot of sleep, but I made it through my classes today, and actually really enjoyed them!

When I got back from class just after 3:30, I got on Facebook and saw that Jenny & Tyler (remember them? musicians I met through The Vespers/here at Campbell) needed someone to work merch for them in Raleigh on Friday, and that would get said merch worker plus a friend in free.  Well, I love Jenny & Tyler, I love doing merch, so that was enough enticement for me to track down a friend to go with on Friday!

A couple hours later, I finally worked that out.  One of the people I had tried contacting for a ride was my friend Paige, but she couldn't, so once I had a ride for Friday worked out, I knew I had to go to tonight's men's soccer game and hang out with her because she leaves for Ireland for 3 months on Monday so I won't see her for quite some time!  But her phone had shut off because her plan ran out and she wasn't going to renew it this close to leaving, so it took me until 6:40, 20 minutes before the game was due to start, to get up with her friend Chris that she hangs out with all the time, and luckily he was with her and lent her his car to come pick me up.

So I went to the game with them.  We won 3-2!  And my friend Bryce scored one of the goals and it was amazing.  He called me his good luck charm, so I think I'll just have to make it to a few more of these games. ;)  While I was there, though, I got an email that I have been selected to join Jeff Bethke's Street Team to promote his new book "Jesus > Religion"!  I'm so excited and so honored!!  More details to come on that soon. :)

Then, after the game, Paige, her group of friends, and I all went to Sunni Sky's afterwards, which is this ice cream parlor about 15 minutes away that Campbell kids like to frequent.  But...I've never been there before tonight.  During the game, Paige and Chris kept talking about these two ice cream flavors called "Cold Sweat" and "Exit Wound"....yeah, I immediately knew THAT sounded painful.  So originally I only agreed to try a sample of Cold Sweat and only if Paige did it with me...

Fast forward to when we're actually there.  There's this adorable worker who gave Paige and me our tiny, speck-sized samples of Cold Sweat.  It was bad, but didn't really bother me, so Chris jokingly said, "Are you ready for Exit Wound?"  And cute waiter, whose name I later found out is Clarkson, said, "Hold on, first you have to have the qualifying sample size of Cold Sweat...and sign both the waivers." 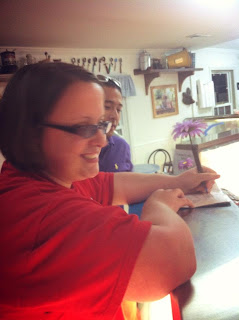 me signing one of the two waivers...ya know, that I won't sue them or whatever if this causes physical damage. ;)

So he brings out a spoonful of Cold Sweat.  Here's the video for your entertainment.


Yes, I legit asked Clarkson if he would give me a hug if I did that, because at that point, I was seriously considering saying forget it.  But I did it!  And I'm kind of glad to be able to say that I did.  I won't ever be doing it again, though.  Exit Wound had actual pepper spray in it!!!

The burning subsided quite a bit after I downed a load of ice cream and some lime sherbet that apparently helps ease the pain.  I got a massive upset stomach when I got back to my dorm, though.  I'm sure I'll be fine by the morning.  It was a great memory-making opportunity.

Now I am off to read my advanced copy of Jeff's book until my sleeping pill kicks in, because for some reason I am WIRED right now, but first, here are the other pictures from tonight. 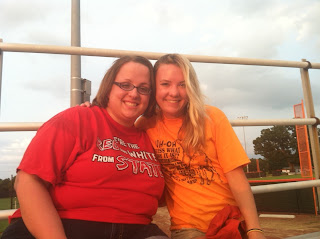 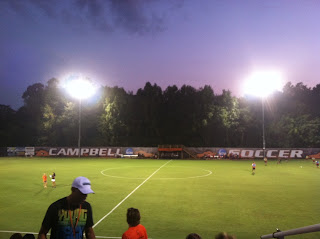 I took this because it made me think of Ryann.  I've spent a lot of time in these bleachers, but this was the first time it was without Ryann out on the field playing or in the stands next to me watching.  It's still weird. 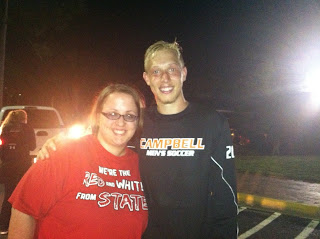 me and Bryce. sweet guy, great player, and he made an awesome goal tonight! 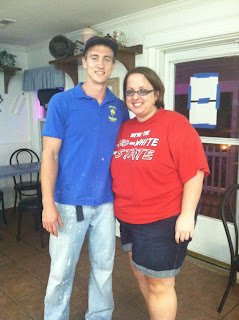 and me and Clarkson...yes, I got him to take a picture, too, since he was the one making and delivering my scoops of torture. ;) He was hilarious, and his taunting made the whole thing a lot more fun.  apparently I can't say no when a nice, good-looking boy wants me to do something crazy! :)

This will definitely be a night I will not be forgetting any time soon.