Oh, Wolfpack.  You drive me insane sometimes, but I love you always.  A win is a win.  Hooray for Niklas Sade!

We won tonight.  Just barely, though.  23-21 thanks to a field goal that Niklas Sade, our amazing kicker, made with 33 seconds left on the clock.  Good thing, too, because Richmond is not a big-shot team and it would have been kind of embarrassing to lose to them by one point.  We deserved the anxiety, though, considering there were at least 3 times that we were within easy touchdown range and totally choked.  Not to mention our defense was totally slacking.  But like I said, a win is a win!

It was really cool to be there tonight.  I love the atmosphere, and the stadium, and cheering on my team until I'm hoarse.  So much so that taking this picture has become kind of a ritual for me every time I'm there. 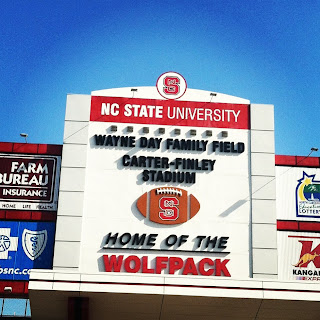 Truth be told, I think of my dad every single time I walk through those gates.

The band was spectacular as usual.  I couldn't help but catch a short clip of their entrance, especially now that Instagram has video.  Haha!

Halftime was where it got really cool, though.  It was Military Appreciation Day, which meant something extra to me this year because my cousin Mike (my dad's oldest brother's son) is currently over in Afghanistan.  We're not close by any means, but it's never cool to have family deployed, especially considering Mike has a wife back home waiting for him, and they're due to have their daughter next month.  So I want him to return safely for them more than anyone.

Anyway, they had ROTC members from every branch at the game today, as well as some wounded vets, some current members who went out and did the pushups every time we scored (gave Mr. Wuf a break for the night!), and tons of veterans in the stands.  Well at half-time, the ROTC members carried out a field-size flag. 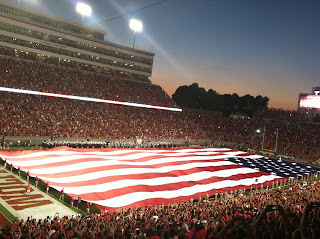 It was so beautiful, especially with the sun set, under the stadium lights, and the crowd chanting "USA! USA! USA!" over and over again.  I even caught a little clip of them waving the flag up and down.

And after that, they had parachuters!  It was awesome to see!  One guy was doing flips the whole way down.

There were some other humorous highlights.  We were right next to the Student Section, and there was one guy right on the edge closest to us who was so spirited and such an instigator getting the rest of the crowd into stuff; he started the wave, and when it went around the stadium 3.5 times, he about lost it - oh, and he had orange shorts on with his red shirt, which was bizarre and awesome.  There was a little girl who liked to do the running man while the band played.  Really ditzy girls stood behind us for a bit and knew so little about football, they couldn't even tell if we were winning or losing or how many quarters there were in the game...Yeah.  That's all I can think of right now.  Mom and I are perfect game companions because we're both equally excited and dorky the entire time, so we had each other cracking up the whole night.  The highlight of the whole night, though, was definitely the field goal so close to the end.  I think my hoarseness is solely from screaming so loud after that.

In other sports news, Wolfpack basketball landed a major recruit for next year, so yay for that.  And Campbell won its home opener in our renovated stadium!!!!  The students stormed the field to celebrate Coach Mike Minter's 1st win (he's a vet of the Carolina Panthers, having him here is a big deal). 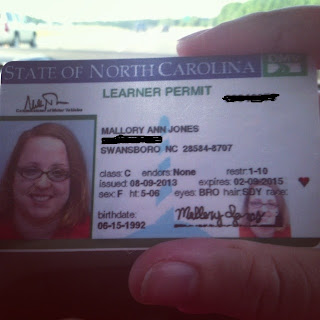 And I actually really like that picture of me.  Icing on the cake.