There are no words for this.

That's actually a line from Jenny & Tyler's song "Skyline Hill."  Trust me, I have plenty of words. ;)

Well, first off, I was an idiot, and after that blog post I posted early this morning, instead of sleeping for a couple hours before I needed to take a shower before class, I was afraid that if I laid down I wouldn't get back up, so I stayed up and did school stuff all...morning?  Yeah, I guess all morning.  Because it was early, early morning.  Then at 8, I got a shower, and then did my typical get-ready-for-class deal.  Class was 10:00-10:50, and then I immediately went and got lunch, ate it, and by that point I had been awake for 22.5 straight hours, so I slept from 11:30-4:00.  And it was hard to get up, but I was excited because of what tonight was!  I ate dinner and got ready and stuff, and my friend Adaisha got here at like 5:10.

We got a little lost in Raleigh trying to find the venue, which is exactly what I was afraid of which is why we left so early, but we still got there at 6:20.  I had no idea there was a 2-story Chick-Fil-A in Raleigh that hosts concerts, but there is, because that's where we were tonight.  We headed in and immediately went up and found the band - thankfully Chick-Fil-A was keeping all guests downstairs while we set everything up, so I was able to just talk to them for a bit.  They introduced me to Jake, a friend of theirs that they're on this stretch of tour with.  I was disappointed that their sweet baby Jane was with their on-the-road nanny (aka Jenny's cousin) at a Young Life House, so I couldn't meet her, but it was all good.

We spent basically the next 45 minutes setting up all the merch stuff and we sat with Jenny while she ate dinner and just talked.  The place was PACKED tonight; it was so awesome!!  By 7:45 or so, when Jake started his set, people were literally having issue finding space to stand, and this was not a small place!  It was crazy, but I was so happy to see such a great turnout.  The nice thing was that nobody really bought anything until after the show, just a few people here and there during it, so I was able to really enjoy Jake's set.

HOLY COW, that man can sing.  You really need to check him out: Jake Ousley.  The last song he performed, titled "On My Way", made me cry; it was a combination of the touching, prayerful lyrics and Jake's absolutely stunning voice.  And to top it off, he spent the rest of the night just being so kind and talking to me and making me laugh a lot, which is always grand.  He even asked me to email him my full testimony, which...it's just always so cool to see God getting my story out there even more.  I bought a T-shirt, but he gave me and signed his CDs for free.  New friends + incredible music + laughter = tonight was a win. 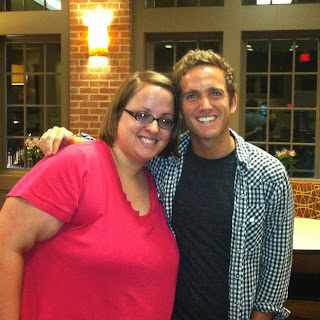 I told him he looked adorable, and he responded in a totally cheesy Mexican accent "Muchas gracias!" Goofball. :)

Then, of course, came Jenny & Tyler's set, which was phenomenal, as they always are.  They are two people that, I swear, when you hear them, it feels like God made them just so that they could find each other and sing together.  Their harmonies are out of this world.  There really aren't words to explain how talented I think they are!  And the best part is, they're even more incredible people.  Jenny gave me her number so I could keep her in the loop about my health, which was just so kind of her.  I was able to share something personal with them that I have been meaning to for months but felt it would be best in person, and when I did, Tyler got this dorky grin on his face and said "Let's hug it out." with his arms open wide.  The body of Christ is so beautiful. 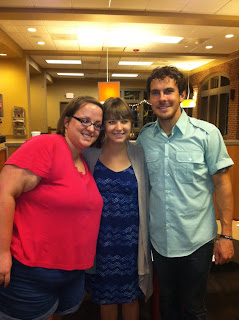 After  the show was kind of crazy merch-wise, just because I was so tired, it was such a small space, and there were so many people there, but it was such a great night.  Wonderful people, music that gives me chills, how could I complain?  Tonight was such a mood-lifter and such a blessing.  I'm definitely going to bed with a smile on my face.

Sunday...my review of Jeff Bethke's book, Jesus > Religion.  I finished it last night at work before all the drama happened, and I truly mean it when I say this book could change my generation.