I've never remembered the details of an event so clearly. I still remember everything, the sights, the people, the music, the emotions. That's why I'm so grateful for this blog, because if I ever do start to forget, I can just go back and read that post and be taken right back to the moment, the moment when I realized everything that had been waiting for me when I was too scared to let go and just FALL.

Until that night, I was too scared to give up my fight for control, even as I worked so hard to be closer to God. There, in that church, though, something miraculous happened. I felt God for the first time surrounding me. He was unmistakably in that room. He was in the hearts of all the people who led me to that decision. He was in the voices of the band. Despite knowing that 30 or more people also got baptized that night, in the moment, it felt like everyone involved was there to be His vessels to call me back to Him, like it was all for me.

I have learned more about what it means to be a Christian and who God is and the gravity of what Christ gave up for me in the past 3 months from a handful of people that were a part of that night than I learned in the nineteen and a half years of my life before that.  And I think I know why...

I think it's because that night, as miraculous and God-breathed as it was, was far more than the culmination of my years-long journey back to God. It was also the beginning.

It was the beginning of me giving my whole heart into making a real relationship with Christ.

It was the beginning of me longing after Him more than I long for the affection of other people.

It was the beginning of me running towards Him without being afraid of falling.

It was the beginning of me trusting other Christians and forming a community around me because I realize that I can't do this alone. He's put these people in my life, he put those certain people at Sanctuary that night for a reason.

It was the beginning of Him taking the years of healing I had to have and turning them into something more glorious than I could ever imagine.

Now, three months after that night, I am here in Washington, DC, living my dream. This is a dream I had given up all hope of when I was in the midst of those surgeries. I had given up on God, I had given up on having a normal life again, I had given up on my future being bright. I've said it so many times today, but if you had told me in 2009 or 2010 that 2012 would turn out to be like this, I would have told you that you were insane. But no. I had turned my back on God completely, and He was still planning and setting things up to give me this ridiculous blessing. And not only that, I have more quality friends now than I know what to do with.  That kind of love is unimaginable. This is what it feels like to be faced with something you cannot understand, no matter how hard you try. It blows my mind.

When I wrote that post about the night of April 5, I titled it "The beginning of the rest of my life." I had no idea it would have this kind of meaning. He has done more in the past 91 days than anyone who was there to witness the miracles that night could have ever predicted. That night, my baptism, was the start of the most magnificent transformation that will continue for the rest of my time on this earth.

To the people involved, and you know who you are, I thank God for your willingness to be His hands in my life every day.  You have challenged me, prayed for me, prayed with me, and kept me focused when I had my moments of human weakness.  You are angels in my eyes, every single one of you.  I pray that God blesses you a thousand fold for the gift that you have been to me.

Thanks be to God. And that's all there really is left to say. 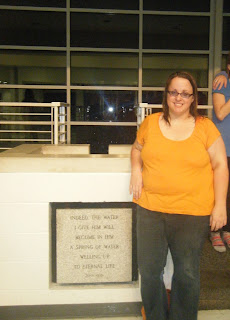