I thought Sunday was supposed to be the day of rest...Turns out, it can be Saturday, too.

And it definitely is when you spend literally all day sleeping.

I had no idea that I was this exhausted, but apparently I really needed some extra sleep because I slept all day, didn't get up till almost 9:00 pm, and it's midnight now and I'm ready to go back to bed.

So I guess it's not such a bad thing that I didn't say anything in my blog yesterday, because there really is nothing to say about today, so I can say everything that I wanted to say last night. 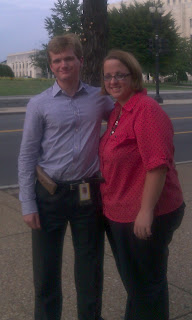 This is Tyler.  He would be the same Tyler I've mentioned multiple times on here.  We went out to dinner last night.

I thought it was a date, to be totally honest, because I'm not exactly a subtle person, so I thought he could tell that I was interested in him.  And when I mentioned in front of one of our coworkers that he was taking me to dinner, and that coworker asked if it was a date, and I looked at Tyler for him to answer because I wanted to know what he was thinking, and he said, "more or less".......not exactly a helpful response.

Anyway, after my meeting with the legislative assistant to a Congressman yesterday afternoon, I went back over to the Navy Memorial to wait for him to get off work at the law office he works at most of the time (he comes over to the Navy Memorial when the lawyers have nothing for him to do).  I ended up covering the quarterdeck (the main level, front desk, our offices are actually in the basement) for Matt so he could go catch his Metro until we closed at 5, and then I waited.  He lives near the Capitol, so we went back over to that area and he took me to this burger joint that's actually kind of famous called the Good Stuff Eatery.  On the way, I wanted to know right off the bat if we were on the same page, so I basically just flat out asked him if this was a date to him.  First, he asked me if that was a serious question, which duh, of course he was, so when I said yes, he said no, not really.

Luckily, I don't think he figured out that I thought it was a date, and from what he said, I think what it boils down to is that he might actually like me, but he doesn't want to get involved with someone when our summer is basically over in three weeks and we don't live in the same state.  Which I totally get.  And I actually sort of agree with.  Either way, I have fun hanging out with him.  He's just ridiculously hard to read, which says a lot for me because I can usually read people pretty easily.

I don't know.  Boys are weird.  And if there's anything I've learned over the past few months, it's that I really need to work on me.  My life this year is about me.  So if there's going to be nothing that gets in the way of that, then that's a good thing.  I have pretty much everything I really wanted out of life right now, including some amazing guys and girls that I know would do anything for me, love me and accept me just the way I am, so I obviously can't be that bad of a person. ;)  (It was a joke!  I don't need any of you lovely people to tell me of course I'm not a bad person, haha.)

I don't think I'm ever going to be the girl who dates just because it's what you're "supposed to do," even if I do lose all this weight (which I think I've lost even more weight since I got to DC, so yay) and look "hot".  I don't want some guy who's basically just there to kill time with me.  There's this old saying that I've heard for years, but it now really means something to me now that my faith means something to me.

A woman's heart should be so lost in God that a man should have to seek Him first to find her.

That's what I'm working on.  I've seen some of my friends who are incredible, Godly people recently get into relationships based and centered on a mutual love for Christ.  That's what I want.  And knowing that there are people out there that are way more attractive than me (haha) who love God enough to wait to have relationships with people inspires me to go for the same thing.  Because I am worth it, but more than that, God is worth it.  He put all this effort into making me in His vision, I'd be doing Him a huge disservice to let just some guy who didn't truly love God use me for momentary pleasure.  I've considered and wanted just anyone at some points (usually when Chelsea is telling me that I'll never have a boyfriend or husband), but in the end, in my heart, I know it's not worth it, and it's not what this life is supposed to be about, especially not after everything I've been through to get to where I am now.

I know that I will know beyond a shadow of a doubt when I meet a guy that I'm meant to be in a real, committed relationship with.  Whether or not he's "the one", that relationship will teach me something I couldn't learn any other way.  Until then, I honestly pray that God will protect me and keep me from wasting my time and my heart on guys that aren't part of His perfect plan for me.