Today, I went to the Capitol to go visit my mentor, Natalie, at work.  She's a scheduler for a Congressman from Wisconsin and invited me to come so she could give me a personal tour.  And that she did.  She took me from the House office building that she and her Congressman work in, to the basement, to go through the underground tunnels to get into the Capitol.  All of the House office buildings, the Senate office buildings, the Library of Congress, and the Supreme Court are connected to the Capitol underground.  How convenient, especially since it's 100 degrees outside.  And it's in the 80s in NC, what's up with that?!

Anyway, she took me down to get my clearance pass, and told me to wait for her by a door while she got it.  She came back and all she said was "follow me" and then proceeded to take me somewhere that not many people get to go...

The floor of the House of Representatives.


The balcony/gallery area is what is open to all the public, but only staff is allowed to go on the floor unless you get special clearance.  And I got to sit in the seats.  I got to stand in front of the podium where the president gives the State of the Union address.  I was in utter shock, so much so that I could not speak.  It was unreal.  I still can't believe that actually happened.  Natalie explained to me what all the decorations on the walls meant.  Sadly, I couldn't take any pictures on that entire floor, but trust me, it happened, and I don't think I'm ever going to forget how cool it felt.

Warning me that nothing else on the tour would be that exciting (haha, duh), she took me over to the Rotunda and showed me lots of the statues that are of people from each state.  I didn't find the NC statues, though.  She took me to the room that was the House floor back when John Quincy Adams was in Congress, and told me lots of stories that I found fascinating as a history/presidents nerd.

Then, we went back to her office for about half an hour so she could finish some work because the offices were closing early today because of the holiday.  I called Mom, and Natalie said she'd give them a tour when they come to pick me up next month.  So yay, I wanted to introduce Mom to Natalie.  We went down to the "flag office" so she could get a flag to be delivered to be flown for some kid from their district who became an Eagle Scout.  Apparently, they do that.

Then, she took me to this really awesome Mexican place right by the Metro Station, and we sat there for about an hour just talking.  It was great.  I really like her.

Then, I came home and chilled out, and then took a two hour nap which felt amazing.  I messed around on the computer a bit more, enjoying the fact that I had nothing that HAD to be done.  Later, around 9:45, I went outside to call Mom and I ended up meeting this guy named Wilson who was playing a bass and asked me if our trash heap always looked that bad.  Haha, yes it does.  We stood around talking for a bit, and then he invited me to come hang out with him and his friends, so I did.  He's actually not in the program, he was just visiting a friend who is, but we bonded over music, so I said sure.  That didn't last long before they all decided to go out to a bar, so I came back to my apartment.

I started my laundry, and spent 50+ minutes on the phone with Michal, which was great because we haven't had a good talk in what feels like forever.  I'm so thankful for that girl.  She just gets me.  And then I somehow managed to put up all of my laundry and make my bed without waking up Jody, which was a miracle.  And now here I am.  And some random but very good-looking dude just walked out in boxers covered in cacti and started asking me questions about my blog.  This apartment is a strange place to be at night, that is for sure.

Here are the pictures I was able to take at the Capitol today. 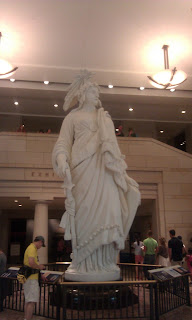 a giant statue called "Lady Liberty" in the Visitor Center 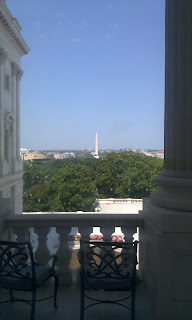 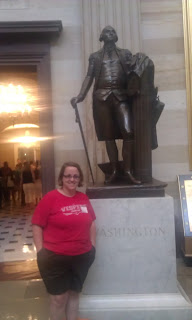 me with George Washington 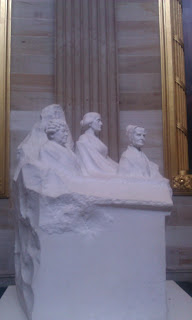 Lucretia Mott, Elizabeth Cady Stanton, and Susan B. Anthony.  The lump is either for whoever will be the first female president, or it's there to symbolize that the fight for equality for women never ends.  Both are rumors flying around. 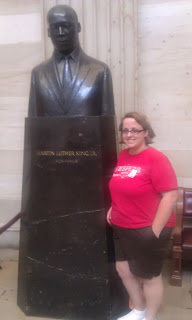 me with Martin Luther King, Jr.  I mostly took this one for Mom. 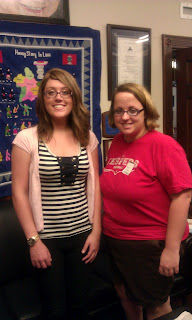 Have I said enough times how much I love my life?! :)