Great music and greater people equals one heck of a night.


Amy came and picked me up just after 3:00.  We made it into Charlotte just after 6:00 (proving Google CAN actually be right on their time estimations).  We found the venue easily because it was right on the corner.  Then, we used her nifty little iPhone and located a Burger King where we could grab some dinner.  We got back to Evening Muse (the venue) just as the doors opened at 7.  It was very small, but nice, and the stickers and decorations on the walls reminded me of The Cavern in Liverpool (where The Beatles were discovered).
Seeing as there was really nowhere for them to hide, I saw the band immediately.  I got hugs from everyone and introduced them to Amy.  They were all incredibly impressed when they found out it was a 3 hour drive. :)  We mostly just sat there for the next 45 minutes or so, talking to them occasionally, but they were pretty busy changing and making sure everything was set up and stuff.

Bruno and Phoebe even had to restring a banjo and a guitar! 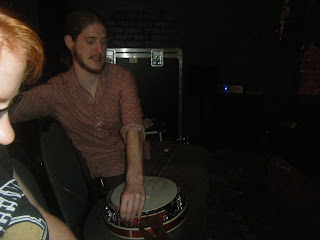 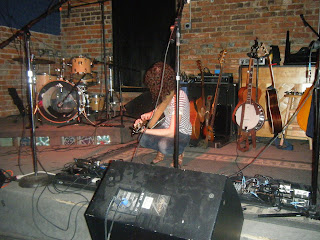 A little before 8, Taylor told us to come outside and chill with them.  They started playing music trying to entice people to come in for the show because at that point, Amy and I were still the only ones who had come. 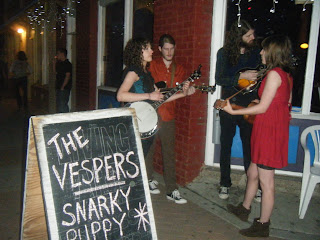 By 8:10, several people had gone into the venue, so we went back inside for the show.  It was AWESOME.  Callie gave us a "shout-out" for coming three hours.  I even got to do the introductions of the band to the other people in the audience.  Bruno asked me if I needed a microphone and I just said, "No, I can yell." Haha!  Callie had mentioned that Taylor and Bruno just celebrated their birthdays so I said "That's Taylor, he turned 22 on Monday, that's Callie and she's 20, that's Phoebe and she's 18, and this is Bruno and he turned 20 last Thursday."  And then Bruno said "And that's Mallory, and she's 19."  So I yelled back "Wrong! Not yet! Not for 2 months!" because I'd told him my birthday was exactly two months from yesterday.  And Callie laughed and said, "You fail."  Haha, it was awesome.  Anyway, I didn't take pictures because I was so close that I didn't want the flash to bother them, but I did get some good videos.  Amy took pics, though, with her iPhone since it doesn't need a flash to get good pics.  Here are two of my favorite Vespers songs.  The first is called "Railroad Boy" which they didn't write - it's an old Irish folktale song or something - and the second is called "Tell Your Mama" which they DID write themselves.  (The people sitting behind me thought it was from a movie, which is what you'll hear me explain in the video.)

They finished somewhere between 9:30 and 10:00.  I don't know because I didn't look at my cell phone the entire night. I just know it was somewhere around then because they had to quickly pack everything up because another band was coming on at 10:30.  We waited for some of the other people to clear out of the way first so I could actually talk to them.  I got them to sign my poster of them that I bought of their website.  Bruno wrote a sweet note on there for me. :)  Amy and I each bought a t-shirt, which are CRAZY soft by the way.  I managed to get some pictures with everyone in the midst of the craziness. 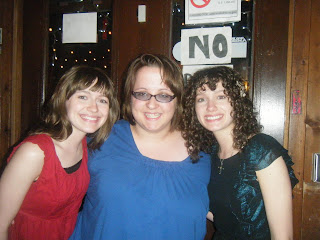 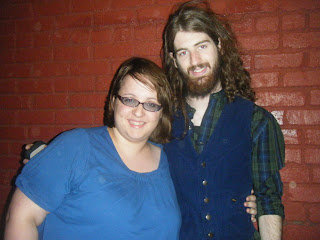 By this point, the band was starving and it was 10:30, so Amy and I left.  We stopped at a freaky gas station where I had to yell through a hole in a window just to get a soda and Amy got gas, and then we went to another gas station so we could get some snacks.  Then, we plugged in my iPod and I sang for almost the entire drive home in an attempt to keep us both awake.  We rolled in somewhere around 1:35.

Amazing night.  Amazing.  It made me that much more determined to find a gig for the band near Swansboro this summer so that they can come down. :)