Well, one reason I'm smiling is because I got everything I needed to get done today done, plus my next French video for Friday so I don't have to worry about that Wednesday since I'm sure my brain will be fried after this Political Thought test, or Thursday since I have to go to Swansboro for the night that night.  And it's only 11:30!

But the main reason that I am smiling is that today was just a really good day, a day that I needed with all the school stress I'm dealing with right now.

I actually understood what was going on in Political Thought, which is hilarious since it's not anything relevant to Wednesday's test.

French was absolutely hilarious.  I spent most of the hour verbally sparring with Dr. Steegar in the way that only two people with our sarcasm and love for each other can.  Pam pretty much spent the entire time just watching us.  For every teasing remark Dr. Steegar has for me, I have one back.  And he loves it.  I'm so going to miss him and his classes.

Also, he graded my 20-page paper (the one I wrote over Spring Break for last semester) and I got an A on it!  That's another A on my GPA and one more bad grade taken off my transcript.  (We won't even talk about the fact that the one F now on my record is from a class and a professor who had the papers I needed to make up for that incomplete on New Year's Eve...a month before the incomplete turned into an F...and she hasn't even graded them yet.)

The best part of all, though, was the hour I spent at lunch with one of the soccer boys, Isaiah. 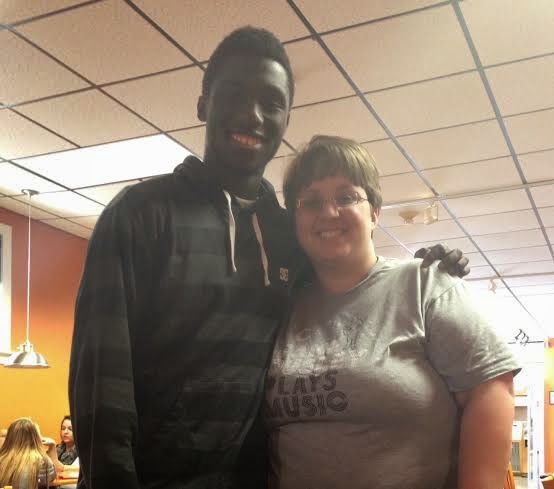 (Believe it or not, he's actually from Canada.)

We both wanted to get together because I missed getting him to sign my ball after the game, and because we haven't ever done this before and wanted the chance to sit and talk.  It was so, so good.  He's such a sweetheart.  And he's super humble, just like every other guy on the team I've gotten to know.  And he's really funny, so he had me cracking up a vast majority of the time.  He confirmed the idea that I'm the "team's sister" and just made me feel really good about myself, and when I texted him the picture a little while after we'd split up, he told me that if I ever needed anything to let him know because his whole team has my back.  I'm a very lucky girl.  Hopefully we'll be able to work it out that we can do it again.