At least I have people to miss and who miss me.

I love New York City so very much, but man, today, I really wish it wasn't so far away, because the idea of getting back on a plane and going far away from all the people I've seen in the past 48 hours made me cry when I got in the shower tonight.

Today was so good. SO good. I got to see everyone that I wanted to. Turns out, when you're only on campus for 72 hours and then you're going back to being 600 miles and about 12 hours away, people will rearrange anything they can to make time to see you. And luckily for me, 6 of them decided to come in two groups of three, which made my day much easier than I expected it to be.

I got up at 10:00 and sort of just relaxed for a bit and then got ready and went and ate lunch at Chick-Fil-A.

My first stop was Dr. Mero, and I talked to him for like an hour.

Then it was Dr. Stanke, and I talked to her for about half an hour before students started really needing her, but hey, it was her office hour, so I got out of there.

After that, I went over to the Student Center and hung out. The plan was to see Mitch from Reformation at 3:20 when he got out of class, then Reafe, Tunji, and Isaiah at 4:00, and then Ricky, Nicole, and Scooter at 7:00. The nice thing was they all agreed to meet me there, so once I was there, I knew I didn't have to go anywhere for quite some time. I thought I would have plenty of time to kill throughout the afternoon. It didn't work out like that. Ha!

I worked as I was waiting for Mitch, but then Reafe found me. It turned out he was there early because he's got some injury so he couldn't be at fitness with Tunji and Isaiah. Of course, I got up and gave him a huge hug, but then I was like "Umm, I'm actually waiting for someone else right now. This is why I planned for you at 4:00." Ha, good thing he already knows and loves me, Type A weirdness and all. But he talked to me until Mitch got there and then he went back into the other room where he'd been before. I spent about half an hour with Mitch, and it was really nice to see him. It seems like we're both doing a lot better now than we were last year, and so it was cool just to talk about how far we've both come.

He left about 3:50 and then I went over and joined Reafe at his table. Tunji and Isaiah actually didn't get there until close to 4:30, so Reafe and I had a good bit of time to talk by ourselves. This guy...he's the kind of character that he just pretends to be so hard and serious all the time, but when you get to know him, he's actually quite introspective and loving.

The other two got there, and we sat just talking and goofing off for a bit until Reafe had to get to work just before 5:00. Tunji and Isaiah were supposed to have class at 6:00, but it got canceled tonight because of an ice storm that is supposed to hit right about now (so far, my plane is still on time tomorrow night at it's supposed to warm back up by late morning - fingers crossed it stays that way so I can get home!) so they actually stayed there and we hung out talking about everything and nothing until almost 7:00. It was absolutely perfect. I knew I missed hanging out with them, but I didn't realize just how badly I missed it until I got to do it again tonight. I don't remember the last time I smiled that hard or laughed that much in such a short amount of time. 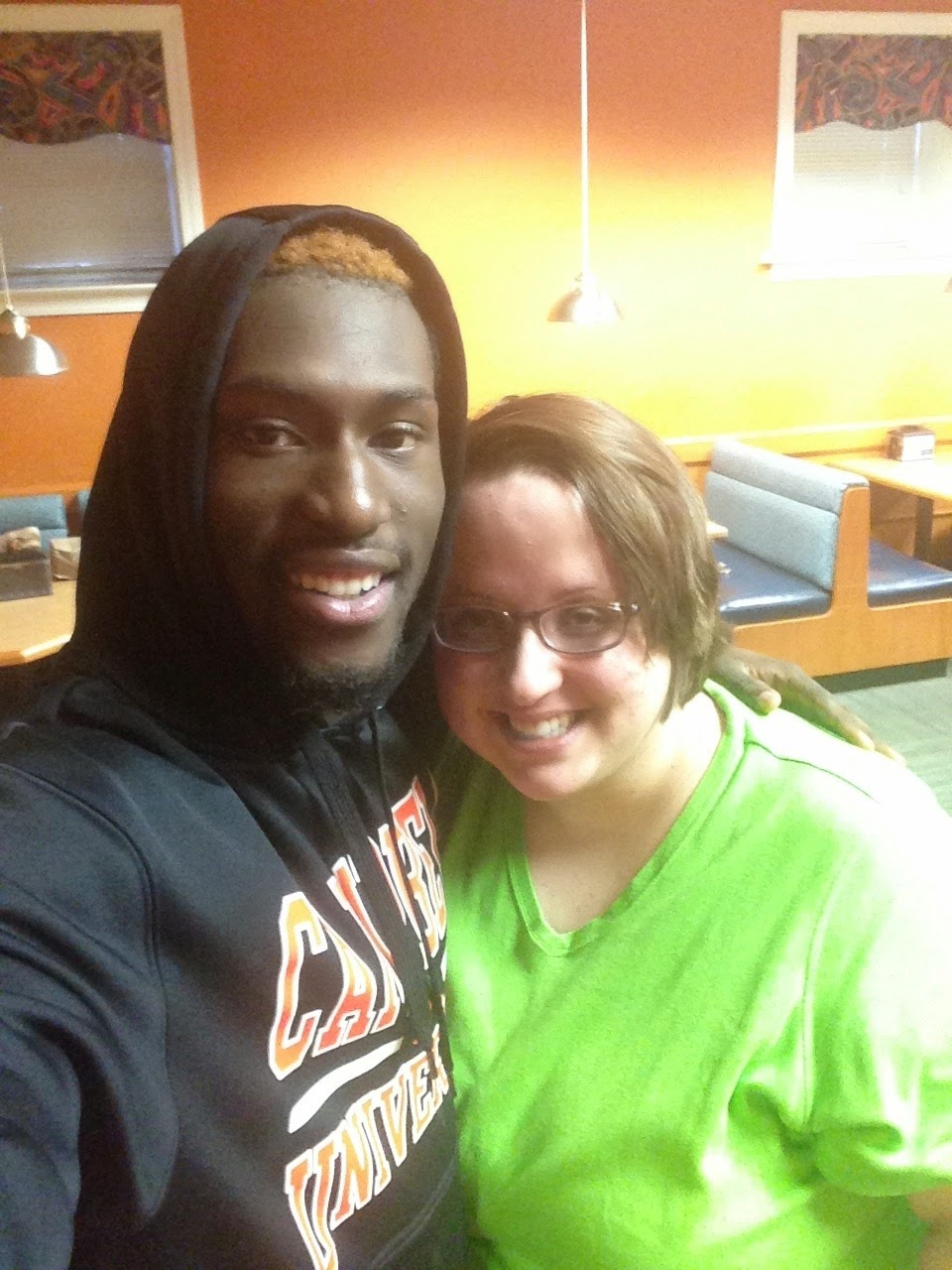 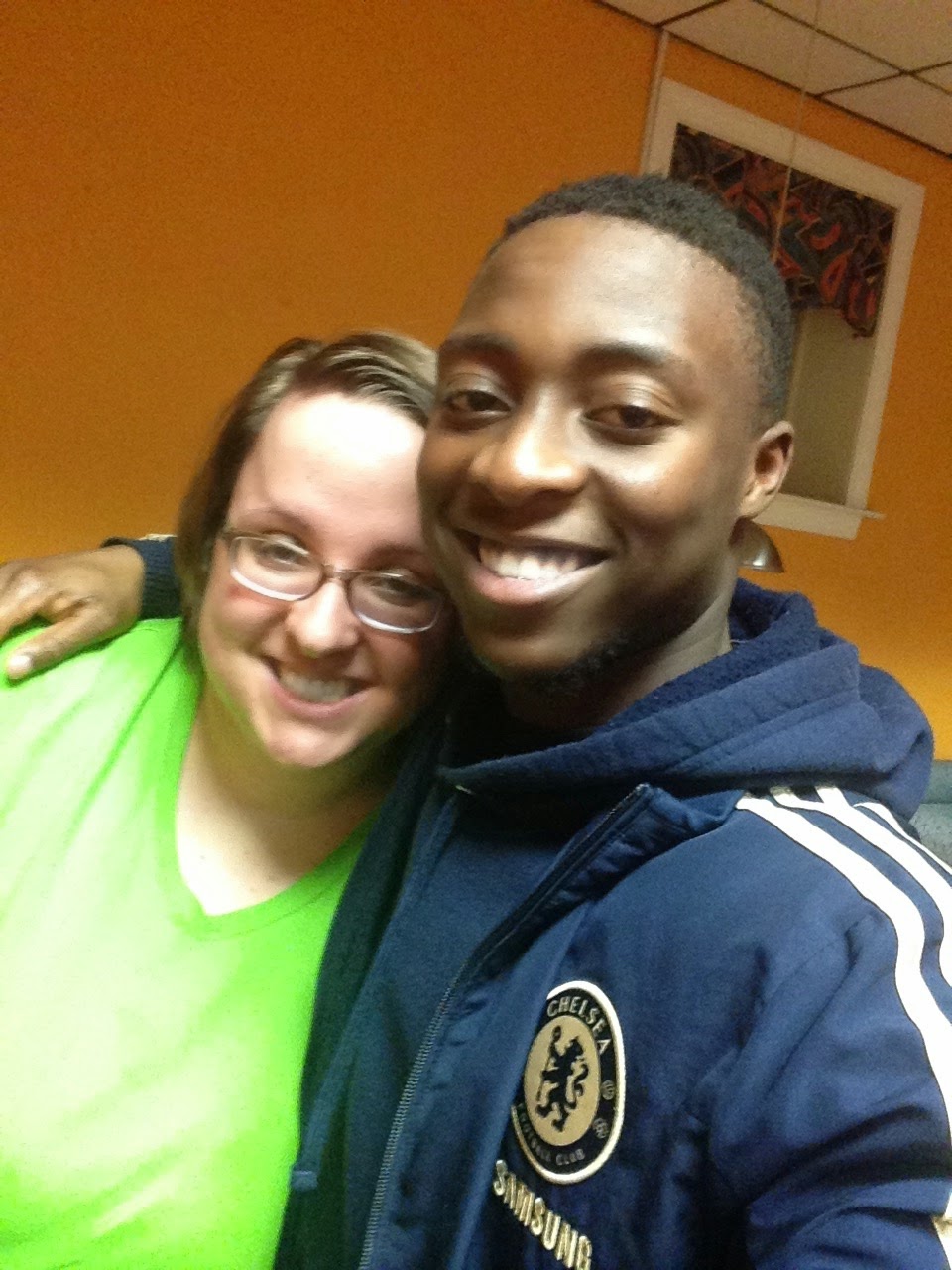 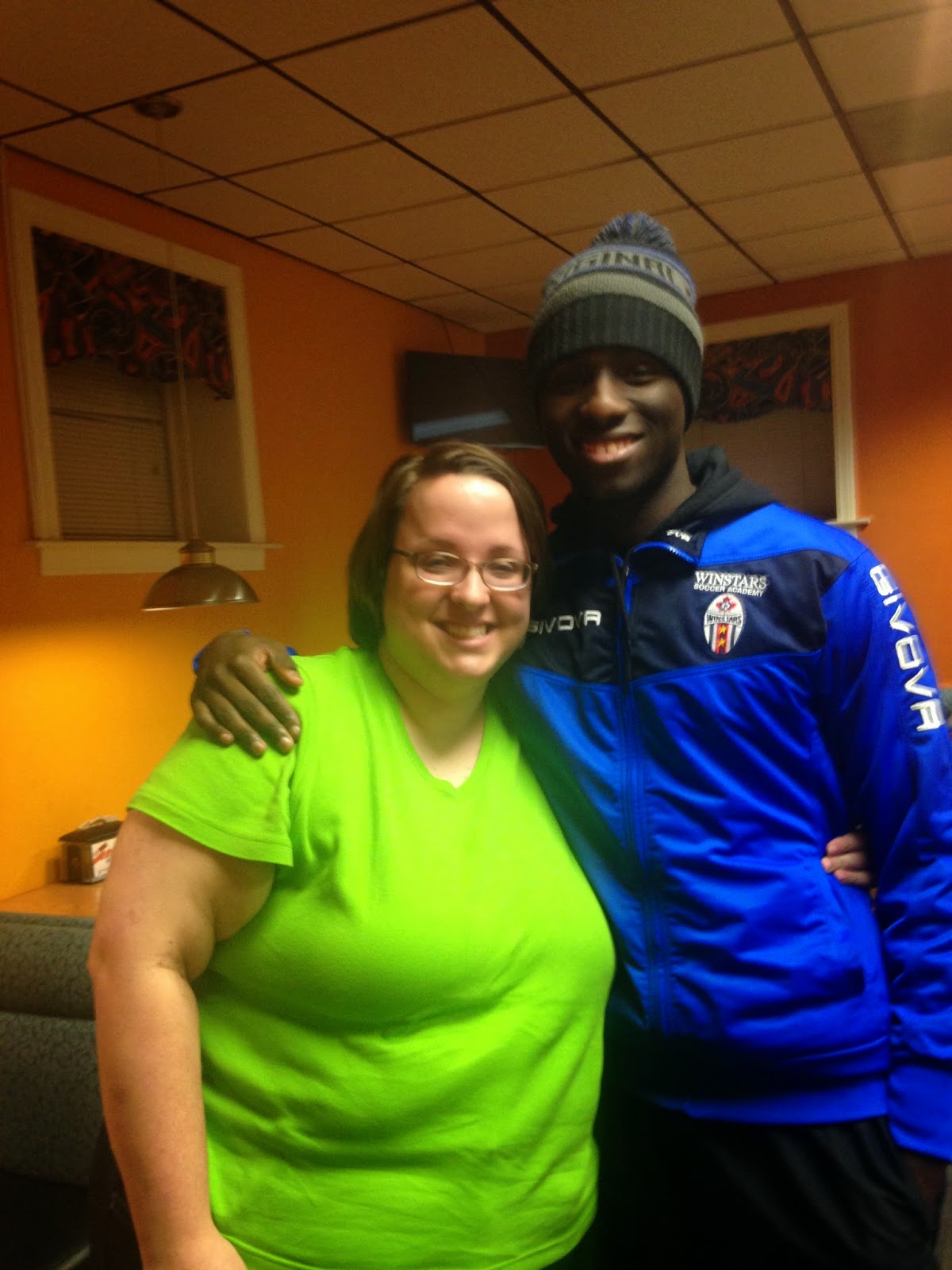 (Isaiah really is very dark in person, so it's hard to get a good picture with him. He hates taking pictures anyway, but my brothers will put up with just about anything for me. :)

Since Tunji and Isaiah stayed there so long, it wasn't even ten minutes before Ricky and Nicole got there, and then Scooter about ten minutes after them. We ate dinner and talked for a little over an hour before they all had to go, and by that point I was beat, too. But while we were there they asked me all sorts of questions about life in New York and I told them different stories, some even about my first roommate experience, and the ensuing conversations just had us all rolling with laughter. 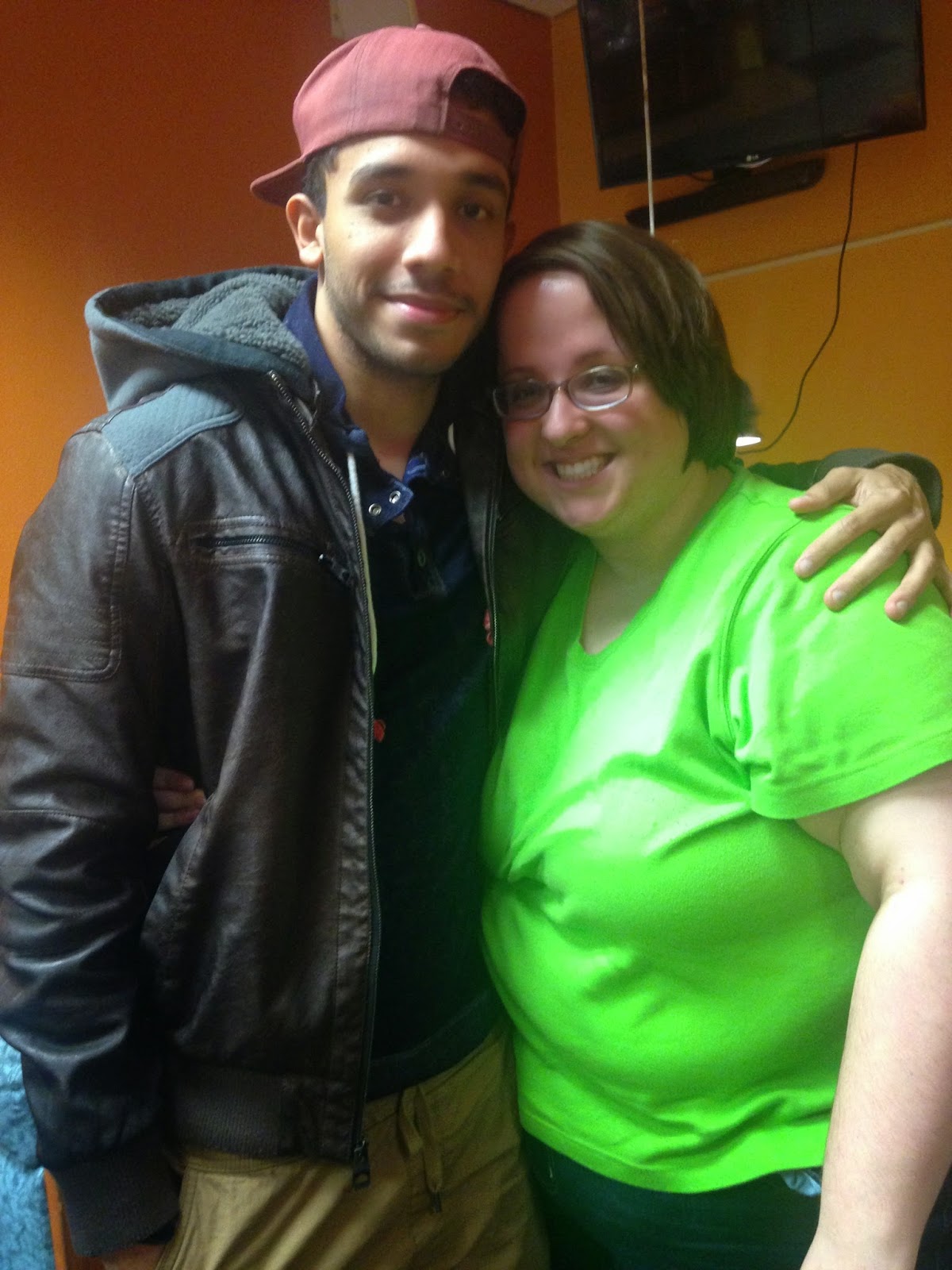 (My shirt is not that blindingly electric to look at in person. The lighting is bad in there, but the flash wasn't on. It's weird.)

Ricky and Nicole offered, well more like Ricky insisted because it's so cold and he is Mr. Protective, to give me a ride back, which I gladly accepted. When we got back to my friends' apartment building, Ricky insisted on carrying my laptop and walking me all the way up to the third floor. We were talking and before I knocked on  the door, he told me something big that is going on in his life, and I asked him if I could pray for him right then, and he said yes, so I prayed for him right there in the freezing cold. There is no feeling like the one I get when I am able to pray with and over people, especially the ones I love, and I was honored that he let me.

Then I came in, collapsed in exhaustion, took a shower, and hung out with the girls for a little while until they all went to bed. It's taken me way longer to write this post than it should have because I've been jamming out to Glee music from this past Friday.

I couldn't have asked for really anything more out of today and yesterday, except for maybe remembering to take pictures with everyone else. I got to see everyone that I had intentions of seeing when I got here and even had a couple surprises thrown in. And also, when people graduate and move, things are inevitably going to change, and so I was honestly a bit curious if things would be different when I was back and me and my friends were together in person again. It was so cool to see that for every single one of them, it was like no time had passed at all. I'm still me. Tunji saw a girl tonight while we were hanging out and she asked what was up and he immediately said "My sister's in town!" and pointed at me. Isaiah, when talking about the incident back in April when a whole group of them showed up to act as my bodyguards, said "We gotta protect our sister. We didn't think twice about it. We never will." Even Martinez, whom I really wasn't all that close to, called me his sister last night and told me he loved me when he walked me out and helped me down the stairs.

But seriously y'all, those four boys in the pictures, Reafe, Tunji, Isaiah, and Ricky, my brothers, my goon squad as I was affectionately calling them today, I can't even begin to adequately describe what they mean to me and how happy today made me getting to be reunited with them, even if it was only for a few hours. The bond that I have with them, it's one that I can't even begin to explain how it happened. It just did. I would do absolutely anything for them, just like I know they'd drop anything for me in a heartbeat. They make me feel special, and important, and like they're the lucky ones that I choose to hang out with them, and it's just mind-boggling to be in this position. They're some of the biggest goofballs I've ever met but take their friendships very, very seriously. They make me better, and Reafe and Ricky are constantly pushing me to grow in my faith and trust God more. I couldn't ask for better guys to call me their sister.

So yeah, I may be getting back on a plane tomorrow to go back to New York, without the slightest clue of when I'll see any of my brothers again, but I'm choosing to look at it as a blessing that I have so much love in my life that I have people I will miss and who will miss me so much. Because this was something that, for a long time, I truly didn't know would ever happen for me, and all of my Campbell family, but those four boys in particular, are such a sweet picture of how big God's redemptive powers can be.