Well, this is unusual.

All classes after 2 pm were canceled today (which meant I didn't have class at all today because my only Tuesday class is at 6 pm, ha!) because the forecast called for snow.

Here's the thing about North Carolina, though: we hear that a lot.  Like, a lot.  And it almost never, ever is as bad as the news says it will be.  In fact, a vast majority of the time they call for snow, there is none! Exhibit A: last week.

But for days now, eastern NC has been projected to get snow.  ALL of eastern NC.  Even down on the coast, which is all sorts of bizarre.  So imagine the great joy at this. 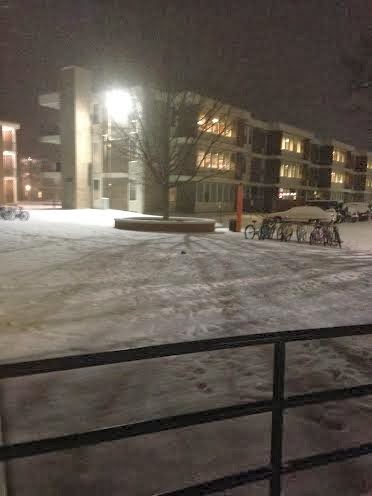 That would be the picture out the back door of my dorm right now.  It's beautiful.  It's only been about 3 inches so far, but that is way beyond what we're used to, and it's supposed to continue through about noon, and it won't be melting tomorrow night as it'll be 10 degrees.  All of tomorrow's classes are canceled.  (Side note: there was a gigantic snowball fight in the center of campus at midnight.  I didn't go, but I think that's awesome.)  I plan on taking a walk tomorrow to get some pictures of campus, because it's beautiful enough on a sunny day, so I know a snow-covered Campbell is going to be stunning.  And besides, this is such a rare thing, I want to remember it!

The timing of this worked out quite well because I spent the afternoon throwing up.  It was awful.  I couldn't even sleep despite taking a load of Phenergan, even when I was sprawled out on the bathroom floor huddled up under my comforter because I was freezing on the cold tile.  Then the hot flashes would come.  Finally about 9:30 I stopped feeling so terrible and managed to down some soup.  Hallelujah for Mom having dropped off a ton of her beef and cabbage soup (which I LOVE) on her way back from Raleigh Sunday.  I don't know what was wrong with me, because I feel pretty much normal now.

Tomorrow, aside from the walk, which will probably be after I go get lunch, I'm going to stay curled up in my pajamas and try to catch up on all the reading I'm behind on.  But for now, I sleep!