Despite hitting a major stress point in dealing with all this grad school stuff (long story short, Paris is out, Duke is in), I had a really good day.

Before Political Thought, I headed over to the bookstore and picked up most of the books for that class.  We're still waiting on the last two to come in, but those aren't even needed until after Spring Break, so it's not a big deal at all.

Political Thought is actually really interesting!  It doesn't seem nearly as frightening as people make it out to be. :)

After that, I went to have lunch with Jay.  I have so missed that kid!  He is, hands down, the most joyful person I know, and from day one, we have teased each other like we've known each other our entire lives.  But what was so awesome about today is we actually talked about some pretty deep stuff.  We dug into theology and stuff like the meaning of salvation and our view of who satan is and heaven and hell and whether hell exists and all this stuff that I've never actually had a straightforward, honest, 100% open conversation about.  It was really eye-opening and I learned a whole new perspective that I'd never considered before.  For reasons I won't get into, I didn't know if Jay would actually talk to me about stuff like this, and I'm really honored that he did.  And the best part of all that was that not only was it just a discussion with no arguing or anything like that, I totally enjoyed myself the entire time.  Something about that guy just makes me smile the entire time I'm around him.  What makes me smile most of all is that he told me to "keep Monday lunch" open.  So it looks like I may get to hang out with my buddy on a regular basis.

I headed inside D Rich (aka the building in which I live...or at least it feels that way some days), and ran right into another one of my Reformation brothers, Josh.  That just cracks me up, because when we were talking, he mentioned that he doesn't normally wander the halls waiting for a class to start like he was today, and being a Religion major he's not normally even in D Rich, but I guess this was just a sweet little blessing from God.  Josh and I didn't talk a lot last semester like I did with some of the other guys, but one of the great understood things about all of us from Reformation is that we love each other like family without needing to say it.  The whole group bonded as one big family.  And I've heard several people say that they miss it and that current classes aren't like that. 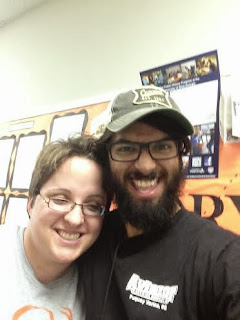 Josh is one of those guys who just refuses to smile normally for a picture.  I love it. :)

I was in D Rich to have meetings with several professors.  I saw Dr. Thornton and was able to really nail down the topic for my Senior Seminar paper.  I saw Dr. Mero and talked to him about the make-up papers I still have to do for The Presidency (I'm working, I'm working!).  And because the timing worked out right, I was able to stop by my Political Thought professor, Dr. Schroeder's office and talk to him about the paper for that class.  After he explained the expectations, I didn't even feel worried about it...but I make no promises as to whether or not that will change in the future.  Ha!

I went to the post office after that, and there I got another awesome surprise.  A few months ago, I got an email from the administration saying that I was one of a small group of students nominated for this "2014 Who's Who Among Students in American Universities & Colleges" thing.  All I had to do was fill out an application, and I would find out in January.  I figured there was no way I'd get it because my extra-curriculars list is pretty bare because of all the health stuff, but I decided to apply anyway because why not.  Well, I got it!  Mom was still at work at that point, so the first person I called was Matt.  Surprisingly, he answered the phone and even he'd heard of this, so it was sweet to hear how proud he was.  I really didn't think I'd get it, so it was a big boost to get that letter today. 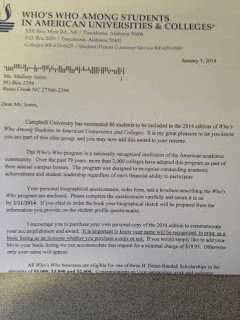 I grabbed some hot chocolate from the Starbucks across the street and sat and enjoyed it before I headed to French class.  I didn't see Dr. Steegar all semester last fall, both due to the health stuff and because my Independent Study was writing a paper so it didn't call for much in-person activity, so it felt good to be back in his office for a regular class.  And I have Pam in there with me, so I'm not alone and I get to do it with an old friend. :)  Being in French class always puts a smile on my face.

And icing on the cake, I ran into James, yet another Reformation brother, on the way to dinner.  We briefly commiserated on the....fun of Senior Seminar papers ;) before he had to run, but it was still great to see him, too, and get a hug.

I wasn't feeling well today at all, but the Lord was so good to put so many things in my day to make me smile and be grateful and happy.  I especially loved getting to see and talk to several of my brothers.  I had a feeling things wouldn't change with us, but you just can never tell when you go from seeing each other regularly to seeing each other only by chance or when you carve out time for it.  But these are genuine, good guys, and I love that we're still close even now.