A friend told me that he feels closest to God when he's out on a walk in nature, because it's just him and the sights and sounds around him with no distractions.  I felt that tonight.  It feels crazy to say it, like someone might think I'm trying a little too hard to be poetic or deep or whatever, but it's true.  I felt God on my walk tonight.

I've become a little obsessed with panoramic photos (thank you, iPhone).  I stopped to take this photo, and I paused for a second.  I remembered all the times I've walked this path and never stopped to really look.  The fall that I spent flying through here in my power chair, because I didn't have to deal with curbs.  All the sunny days I saw my fellow Camels just living life.  The times I nearly got whacked by footballs and Frisbees by guys who didn't notice me.  Girls studying.  Couples cuddling against the trees or on blankets.  Running to get dinner in the pouring rain, praying I didn't slip on the bricks.  All the times I did slip on the bricks, even on the dry days when I just didn't pay attention to how uneven they were.  Going over to Austin's room late at night.  But I never noticed just how beautiful this courtyard is. 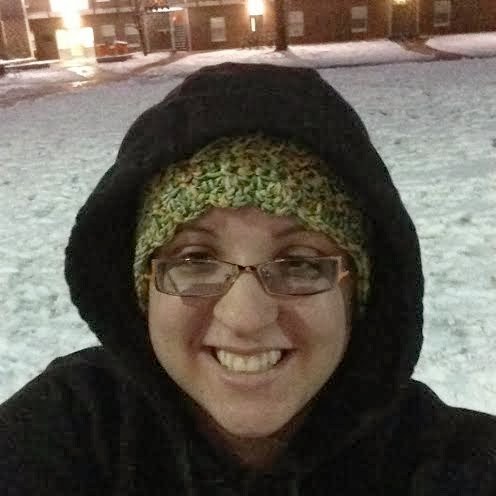 I didn't even brush my hair before I left.  Why bother, when I was putting on the softest hat I've ever seen given to me when I was in Texas?  And underneath that hoodie, I had the same t-shirt I slept in.  But that face, that's joy right there.  And people told me I looked beautiful.  Sometimes you just exude happiness, and I was more at peace tonight than I've been in a long time. 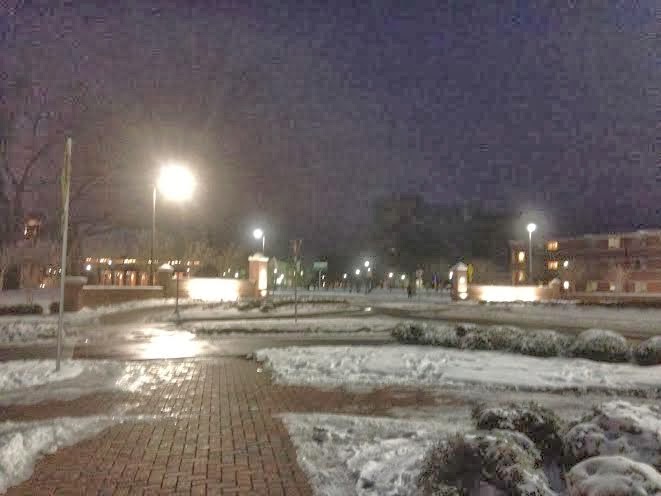 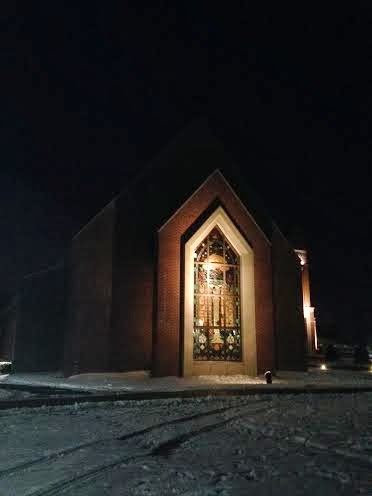 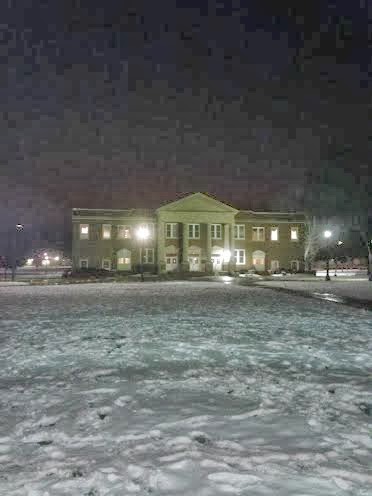 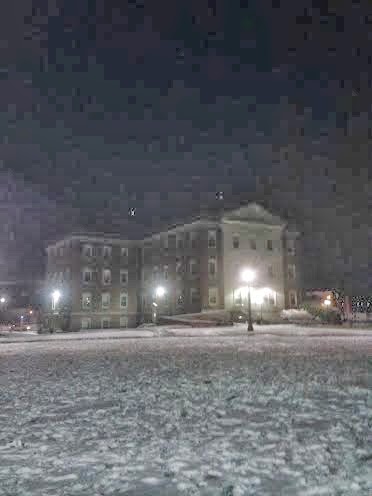 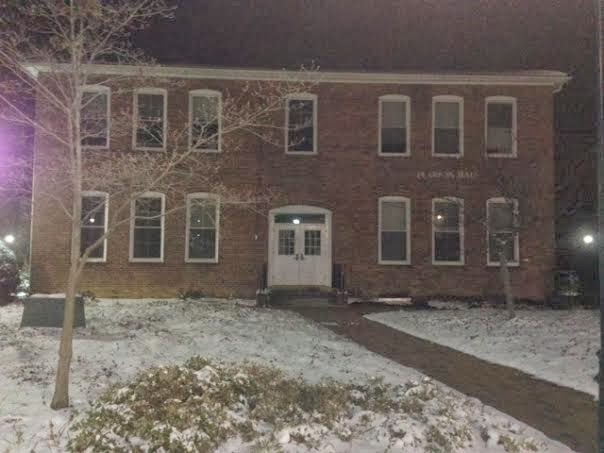 As I walked, I thought about the first time I stepped foot on this campus, back in April 2009, and how, as I walked the same paths that I was walking tonight, I knew I was home.  How I could immediately see myself living here.  How I fell in love with a campus and a university that, little did I know, would completely and utterly change my life over the next few years.  I stopped in front of D Rich and Pearson, places that I've spent hours upon hours learning from professors who pushed me in all the ways I needed it and friends who showed me how to love myself the way they did from the beginning.  And Taylor, a building that I had two Religion classes in, and then went back to to accidentally find some brothers I didn't know I needed.  And I felt God reminding me that even though I felt heartbroken when I didn't get into William & Mary, He knew all along that Buies Creek was exactly where I needed to be.  It's where I belonged.  And tonight, I got to see the place that I love so very much shine. 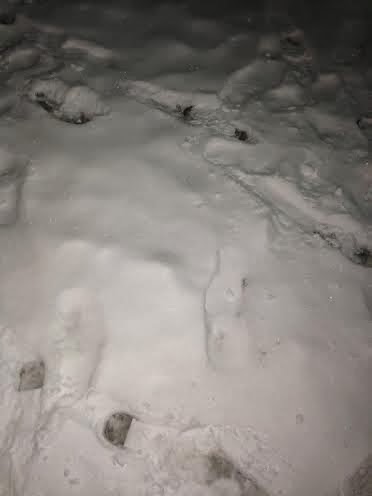 This seems like a weird photo to take, I know, but I had good reason.  You can't see it well in photos, but the snow?  It sparkled.  Like, it literally sparkled.  It's as if God put glitter in it.  I've seen snow before, but I never noticed that.  Or maybe I have before, but God needed to remind me of it tonight.  If God can make things like clean, soft, fluffy snow that sparkles in the light of the lamps, who am I to think He doesn't know me?  That He doesn't know every last detail of who I am and the things that make my soul come alive?  He knows me. 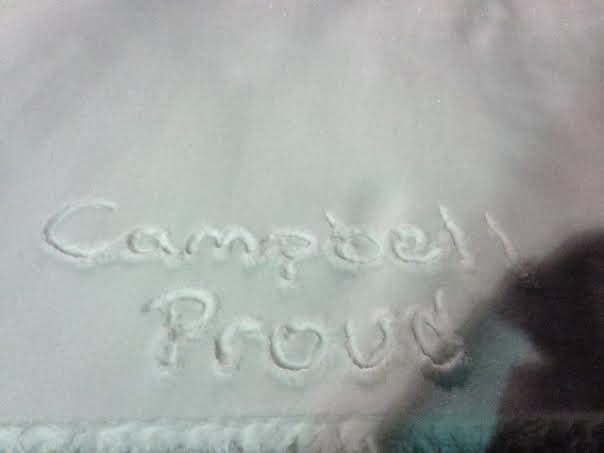 Everywhere I went, there weren't just signs of all the people who'd been out enjoying the weather over the past 24 hours.  People had written about Campbell.  So I wrote something of my own.  Every year, every month, every week, I learn just how real the Campbell family is.  And as I saw all the places that love for Campbell had been written in the snow, I couldn't help but smile.  Aside from a handful of freshmen each year who seem to misunderstand what they learned about Campbell before they showed up who transfer after their first semester (but what school doesn't have freshmen like that?), I've never met anyone who was sorry that they chose Campbell.  Campbell proud is more than just a phrase or a saying or a hashtag on Twitter.  You step foot in the Creek, and it's everywhere. 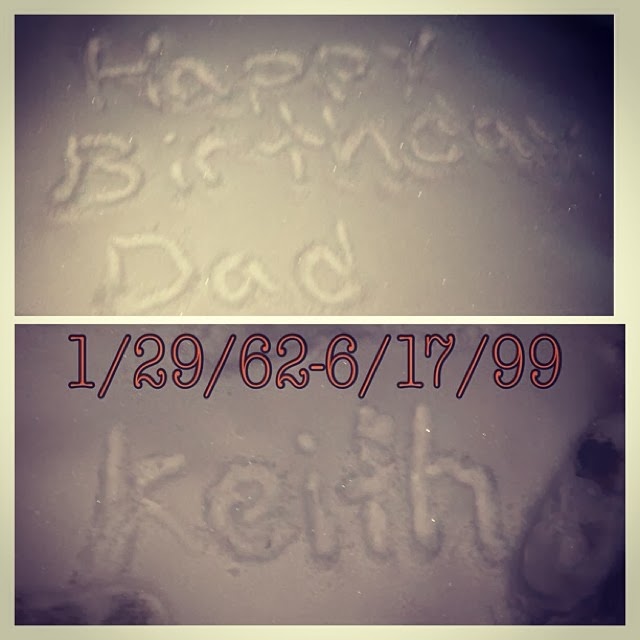 "You know what's tripping me out?  This line, between the two years.  It's his whole life.  Everything that happened is in that line." "What are you gonna do with your line?" - Glee (The Quarterback)

I've been thinking about this since the clock hit midnight.  I don't ever forget this day, and I pray that I never do because things like this are just about all I have.  I thought a lot about him on my walk, too, and wondering if he can see me.  I will never know if he's in heaven or not, but the possibility of it and the hope that comes along with that is what I have to hold on to.  Jesus came so that I could have hope and joy even in the midst of terrible things like cancer and girls growing up without the dad who so desperately wanted to be there.  Either way, he's my dad, and it's his birthday, and I will celebrate.  I know that he loved me, and every day, I pray that he's proud of who I am and where I am in life.  I know that he didn't stop fighting when he was sick because he knew he had us, and I like to think I got some of my fighting spirit from him.  And as I knelt down in the snow and felt the freezing cold and the wet seep through my jeans, I didn't care because I wanted to leave a couple marks for him, even if it's all going to melt away tomorrow.  So Dad, that was for you.  I hope you could see it.  I love you.  Happy birthday.

When I got back to my dorm, I didn't want to go back inside quite yet.  So I went next to the dorm, in the big open space between Burkot and McCall...and I laid down.  Right there in the snow.  And I stared at the sky and thought about how maybe God knew I needed this walk tonight to slow down and forget everything else that has been weighing on me.  The work, the questions, the stress, the fights, the heartache, the fear, nothing else really mattered as I laid there and just thanked the Lord for giving me that time to reflect on how truly blessed I am.  God is right here, right now, moving to bring me to the mountaintop, if only I would just let Him carry me sometimes instead of always trying to fight through the exhaustion and make it there on my own.  Most of the time He's just walked beside me, waiting for me to own up to my shortcomings, other times He's knocked me down so I could understand just how desperately I needed His help.  No matter what He's doing, though, He's been here.  Whether I wanted it or not, whether I realized it or not. 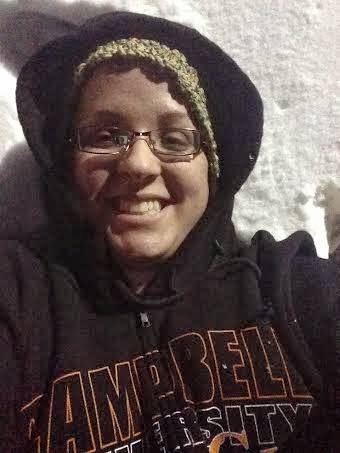 And tonight?  Tonight, He laid with me, right there in the snow.  And my whole world shined brighter than it has in a long time.