Ah, man.  When you're in the middle of something really hard and painful, that thing people tell you about how "God's mercies are new every morning", it doesn't really give much comfort.  It's like, it's great that it might be better tomorrow, but I want it to be better right NOW, you know?  But as time goes on, I'm learning that all those phrases that, before I was a Christian, I thought were just trite, Christianese junk....are actually true.  Wonders never cease! ;)

Last night was so amazing and so hard at the same time.  When I fell asleep, I sort of felt like I was at the bottom of a really tall ladder.  But somehow, the vast majority of today, I have had a massive grin on my face.  It makes absolutely no sense to me how God could have given me such an awesome day today after how dirty and destroyed I felt last night, but, well, that's God for ya. 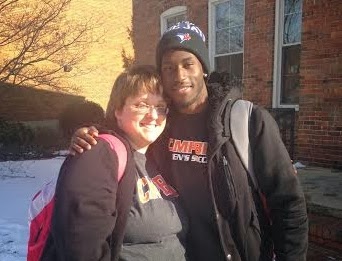 This is Reafe.  He's one of the soccer boys that I met last fall after the games, and we became Facebook friends (as I did with several of the guys).  I wanted to know something about him other than how he can kick a ball, and he wanted to know something about me other than that I like to watch soccer (haha!) so we got together for lunch today.  I was honestly expecting it to be nothing, but God used our time together to speak straight to me in such a crazy way.

We were talking about my friendships with the guys on the team, and how impressed (and, really, amazed) I was at what great people they were.  He told me how he and the other guys see me, and what it meant to them that I came out to every game that I could despite the stuff that I was dealing with last fall.  He was surprised when I mentioned that sometimes I couldn't believe that they were friends with me and cared about me and several of them had prayed for me.  So I told him about some of the stuff from my past and what that did to my self-esteem and confidence, and he just straight out asked me, "Are you close to God?"  That's some boldness.  Then he told me something that I knew immediately was God speaking, "Because if you're close to God, if you read the Bible, what everyone else says won't matter.  You won't care."  Boom.

We talked about so much, to the very last minute that he walked with me to Dr. Steegar's building (which is where we took the above picture).  This isn't something I've ever really done with people the first time I hang out with them, but for some reason, I felt lead to ask him if I could pray with him before I went into class.  He said yes, so we did.  That's the awesome part about going to a Christian school - two people can pray right out in the open and no one thinks it's weird.  Heck, Tunji, another soccer guy had walked up just a minute before, and he just stood there patiently and waited.  This isn't the first time I've been able to do that, but it's never lost on me how cool it is to have this freedom and not be harassed.

You know what made my day, though?  Reafe asked me if I was going to go to the one home game the boys have this spring, and I said yes, of course, I was, that Chirag told me about it a couple weeks ago and it was already in my calendar.  He smiled and said "Good, because you're practically a member of the team...well, not a member, but.." and I said "I'm like the team's sister," and he said "Yes!  You're our sister!  You're adopted."  Tunji agreed with him later, and I even jokingly texted it to Justin and asked him if it was a fair comment, and he said "I would say that's fair!" :D  I do love my soccer boys.

French class was.....French class.  I couldn't have fun transcribing videos if it weren't for Dr. Steegar and Pam.  We laugh hysterically the entire time.  I only wish Ryann were there to enjoy it!

And then, this evening, I spent some time emailing with the same friend who I mentioned in last night's post.  I had written her to tell her I finally realized how right she had been, and she responded to remind me that she didn't judge me and that she loves me unconditionally.  She had some incredibly powerful and true words about mercy and forgiveness and grace that were, again, God using my friends to speak to me.  He's so faithful.

She also sent me this song...which is exactly what I needed, and what I would have put on last night's post if I had had it then.  I FaceTimed with Alexis tonight to tell her about everything that happened last night and today, and when I told her about honestly how disgusted I was with myself last night when all the realizations were washing over me, she took the time to encourage me on the line between conviction and condemnation, and I told her that I knew.  That in the midst of how upset I was with myself, I couldn't stop thinking about how incredible it is that God still loved me the same despite how wrong I'd gotten everything.  And the fact that He would give me such an incredible day after everything that happened last night?  It's just mind-boggling, to see that I'm loved that much by the One who is sheer perfection.

Lord, I know I let You down
But somehow, I will make You proud
I'll turn this sinking ship around
And I'll make it back to You

Well, I was chasing healing when I'd been made well
I was fighting battles when You conquered hell
Living free but from a prison cell
Lord, I lay it down today

And I'll stop living off of how I feel
And start standing on Your truth revealed
Jesus is my strength, my shield
And He will never fail me

No more chains, I've been set free
No more fighting battles You've won for me
Now in Christ, I stand complete