First, I would just like to state for the record that, according to weather.com, it is currently eleven degrees colder here than it is in Minneapolis. Minneapolis, Minnesota.  I'm about to go hop on a plane to upstate New York to join my friend at HER university because it's about the same temperature there as it is here and at least they get snow with their bitter cold.  THIS IS NOT OKAY.  I had to break down and go spend $43 to buy a new sweatshirt at the bookstore on the way to class this morning because the zipper on my NC State sweatshirt broke the day I left for Texas and I don't own any long-sleeved shirts (because it's only been recently that I have ever been cold. EVER. Not even kidding.  Usually I can get by just fine with short-sleeved shirts and a hoodie/sweatshirt/light jacket) and you can NOT walk out into "feels like 7 degrees" without a jacket that zips.  I WANT MY 60 DEGREE WINTERS BACK. NOW NOW NOW!!!!!!

This is Clayton.  He's one of my Reformation brothers.  You 'member him?  Yeah, you 'member. (said in the voice of Michelle from Full House...just go with it) 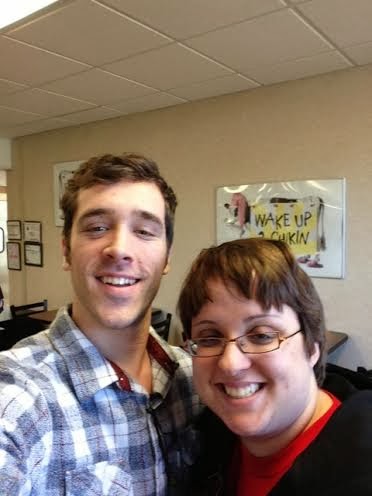 He's a good one.  He's one of the ones I really wanted to make sure I kept up relationships with this semester, and thankfully, that hasn't been an issue so far.  We've gotten together for lunch a couple times now, and I earnestly hope that it continues throughout our last few months at Campbell, because talking to him is always a joy.  We're both rather introspective people who love to learn and read a lot, so each time we have the chance to talk, whether on Facebook, via text, or in person, we almost immediately jump into deep conversation.  But my favorite part about Clayton is that he can take very serious subjects, such as what Paul says about prayer, and throw humor in in a way that I learn so much and crack up laughing at the same time.

What Clayton told me about Paul and prayer was actually a really good lesson for me.  I have a terrible tendency to treat prayer as just one more item on my daily to-do list, like how parents teach their kids to say their prayers before they go to bed.  I'm not saying there's anything wrong with that, not at all, but I'd say it's long past time I got out of that mindset.  Paul says to "pray without ceasing", but as Clayton put it, "I've got things to do!"  I can't get Clayton's example out of my head: treat prayer like making a phone call, and just don't hang up the phone.  Keep that line of communication open all day, not only so I can continue to talk to God throughout whatever I do and wherever I go in the day, but also so He can speak to me!  After all, "when you make a phone call to a friend or relative, you don't just talk at them and then hang up.  Why should God be any different?"

The other topic that we talked about at lunch today was the issue of credit and pride.  I told him about how when people come to me to tell me what knowing me has done for them or how it has helped them, I often tell them flat out that it isn't me, that it's all God.  Clayton really opened my eyes to another angle of this that I haven't seen until now, probably thanks to my incessant penchant for beating up on myself, even when it's seriously uncalled for.  He told me that while yes, God is the One who should get the glory for the good that comes out of our lives, we shouldn't diminish the fact that we play a part in the plan that He has for the world.  He then pointed me to this story in Esther, which I then came back and looked up on my nifty little phone Bible. 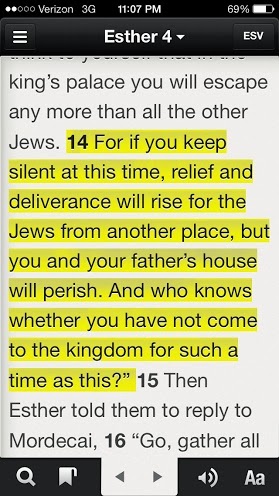 Mordecai asked Esther to go to the king to plead for the survival of the Jewish people, and she responded, naturally, with hesitation, because the commonly-known rule was that anyone who went before the king without being called would be killed, even her, his queen.  But Mordecai was not shy about telling her that if she didn't, the Jewish people would still be saved another way (because they are God's people), but she would perish.  And then came the question that was Clayton's point in telling me this story.  "Who knows whether you have not come to the kingdom for such a time as this?"

I in no way intend to imply that I'm here to save a people.  But just as Mordecai called Esther out on her fear and hesitation, so did Clayton for me, whether he realized it or not, when he said three simple words to me this afternoon in Chick-Fil-A.  He chose you.  Do I understand why He chose me?  Not at all.  I pray that the day that I think I understand that or feel qualified for this is the day that God Himself comes down to smack me in the face.  Thanks to my conversation with Clayton today, I finally don't feel like it's a sin to be proud that God chose me for this life and this story.  He could have picked someone else, yet He saw me in all of my flaws and fear, all the days I didn't want Him to have picked me for this, and knowing it would take me 19 years to even begin to want to serve Him and the purpose He had when He ordained my creation, and chose me anyway.

And guess what.  He chose you for something, too.  Something great.  We're not all going to save a people, in fact the vast majority of us won't even come close, but what each of us is here for is equally fantastic because it's what the King of the universe called us for.

So if there's one thing I could say to you today, it'd be this.  When you think about what God might be calling you to in this life, and it seems daunting and impossible and some days downright terrifying, be not afraid.  You were born for this.

(Also for the record, it took me much longer than necessary to write this post because I've been rocking out to Queen as I wrote.  So clearly, I don't have it all figured out.)