That was the last time I was able to hug Ryann. And just writing that sentence makes me sad. Because two years is way too long to go without seeing your sister.

A lot has changed in two years. I remember going back to Campbell in the fall of 2013, wondering how I'd ever have a good time in my last year when she was gone and I had spent two school years with her. Little did I know, I would soon join that Reformation class, then be taken in by my soccer boys, and have the best year of my life. I still missed her, but I was far from lonely. Furthermore, it was her influence, as well as her introduction of me and Bryce several semesters beforehand, that helped foster the relationship with me and my soccer boys to begin with. She once told me that she was "still there", it wasn't like she just up and disappeared, her influence was still there, and I agree.

And now, I'm in New York, almost done with my first year of grad school, she's been to Europe and back several times and is now back in LA, and our lives look a good bit different than I think either of us planned.

It's only natural that relationships change when you go from being on the same very small campus in a very confined bubble to living thousands of miles apart and having to be "real adults" with jobs and lives and other distractions. We don't get to talk much anymore, but even if it's just a text to say we miss each other, we both know that we are on each other's minds and the love is still there.

For that fact and knowledge, I am so very grateful. Because I don't want to ever find out what my life looks like without her in it in some way. So much of me is made from what I learned from her.

No distance can truly separate sisters, this I know, but my hope is that one day soon, we'll be back together again. I'd love nothing more than to show her around New York City. But mostly, I'd just love a hug from my sister. 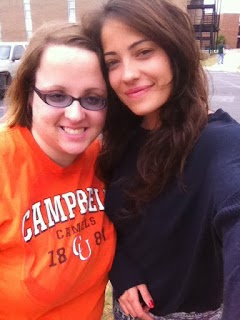