(This post is a day late because I am sick.  I fell asleep at 7 pm Saturday night and pretty much didn't wake up until 3 pm Sunday.)

I couldn't sleep much last night.  I was wired.  I fell asleep somewhere around 2:15, yet getting up at 6:30 was simple.  And for once, it wasn't a hassle to get Mom out of bed.  We ate breakfast at the hotel and got dressed and checked out, and we were headed to Campbell around 7:30.  I got there and slipped on my robe and, amazingly, Jayshawn was walking past right then and I gave him my ticket to give to his girlfriend for the ceremony.

Then I headed in the practice gym at the back of the convocation center where they were organizing all the graduates.  I got to see some various friends and give them hugs and basically just milled around and talked until they ordered us to find our assigned seats. 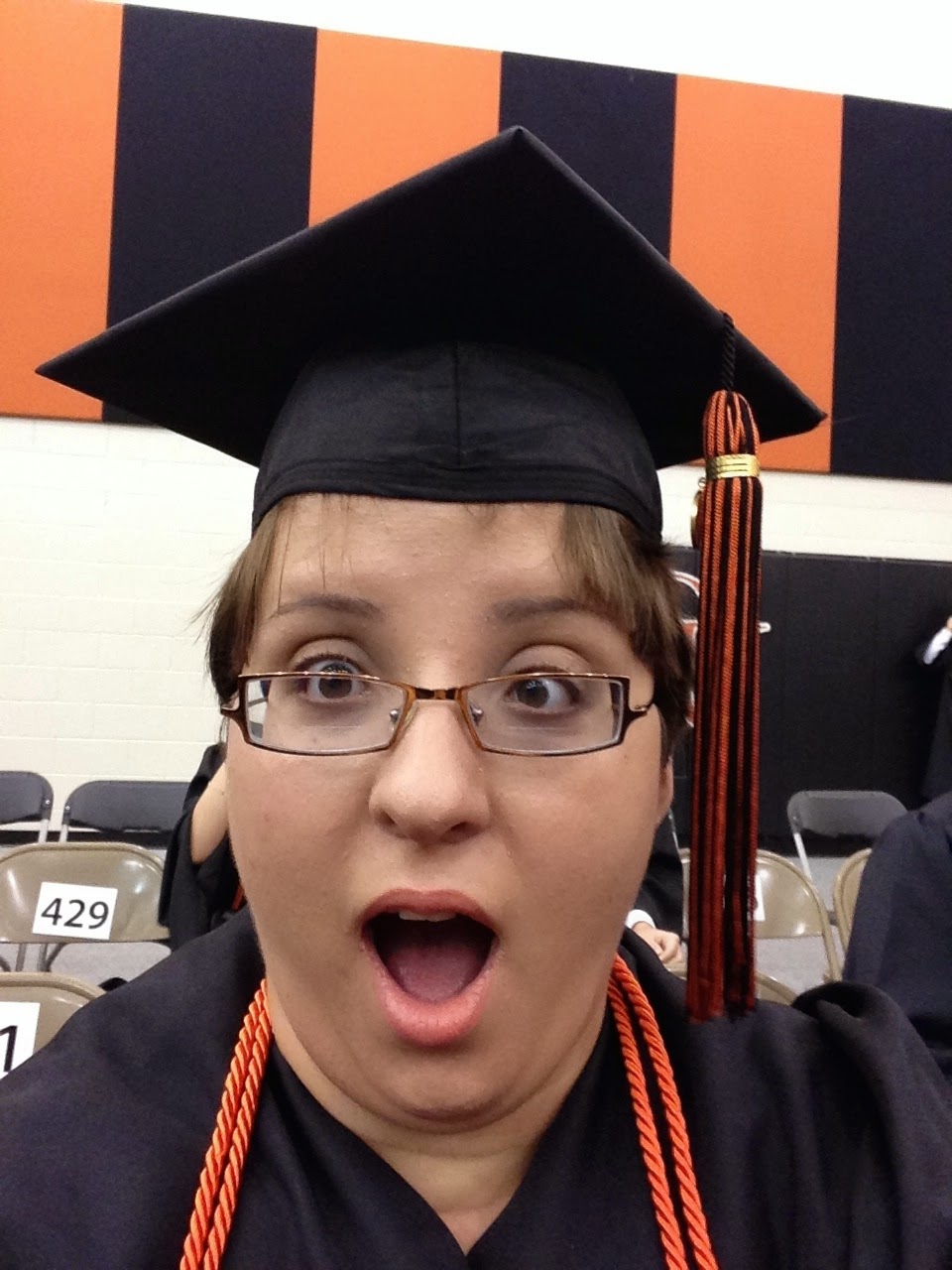 We got some incredibly redundant directions from the Registrar for the next half an hour.  Then, it was finally time to stand up and get ready to march in right before 9:00.  I started getting really overheated and didn't want to have a problem in the middle of the ceremony, and thankfully some guy in a suit who was helping direct everything went and found me a cold bottle of water and I was able to run back in line before my row actually got in the arena.

The ceremony was pretty standard.  Lots of talking, a couple awards given, a hymn and some verses (yay Baptist school), the commencement speech (which was thankfully only 10 minutes long), and then the fun stuff about handing out diplomas.  Well, actually dummy diplomas.  They're just rolled up pieces of paper, but still. 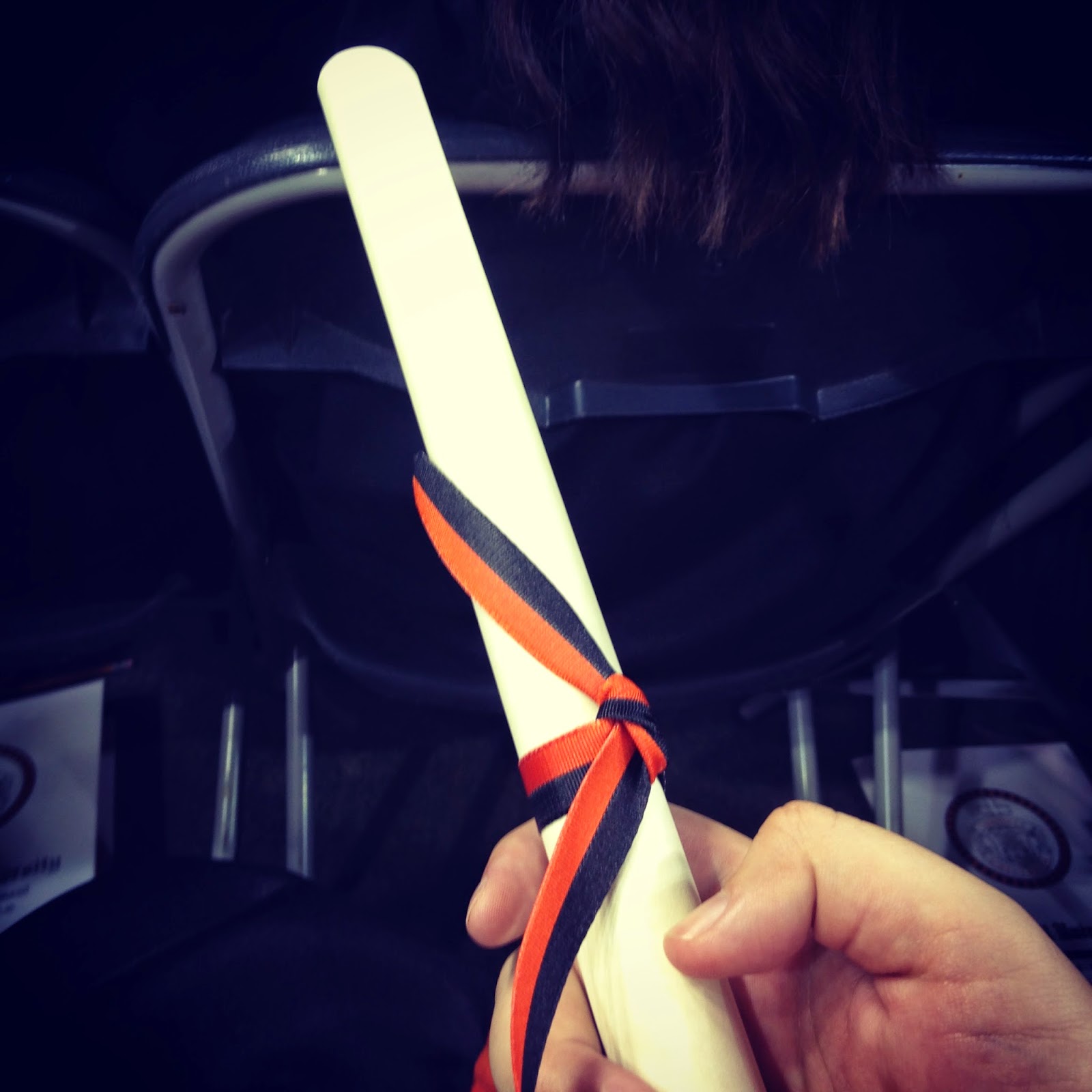 Holding that rolled up piece of paper?  It was a symbol of victory.  It was a symbol of the long, hard-fought battle I had to go through to get here.  Of beating the odds.  Of proving wrong all the doctors, teachers, family friends who thought that I wouldn't make it here.  Of proving myself wrong for all the times I thought that I didn't have the strength to make it here.  I did it.  And it felt incredible.

I didn't even go all the way back in the practice gym.  When we marched out, I threw that dummy diploma back in the box by the doorway and headed to find my family.  They had already made it to the back hallway by the time I got there.  The first thing I did was grab my mom and hug her, and then I immediately fell into Matt's arms.  It meant the world to me that he was there.

By my luck, Dr. Steegar walked right by at that point. 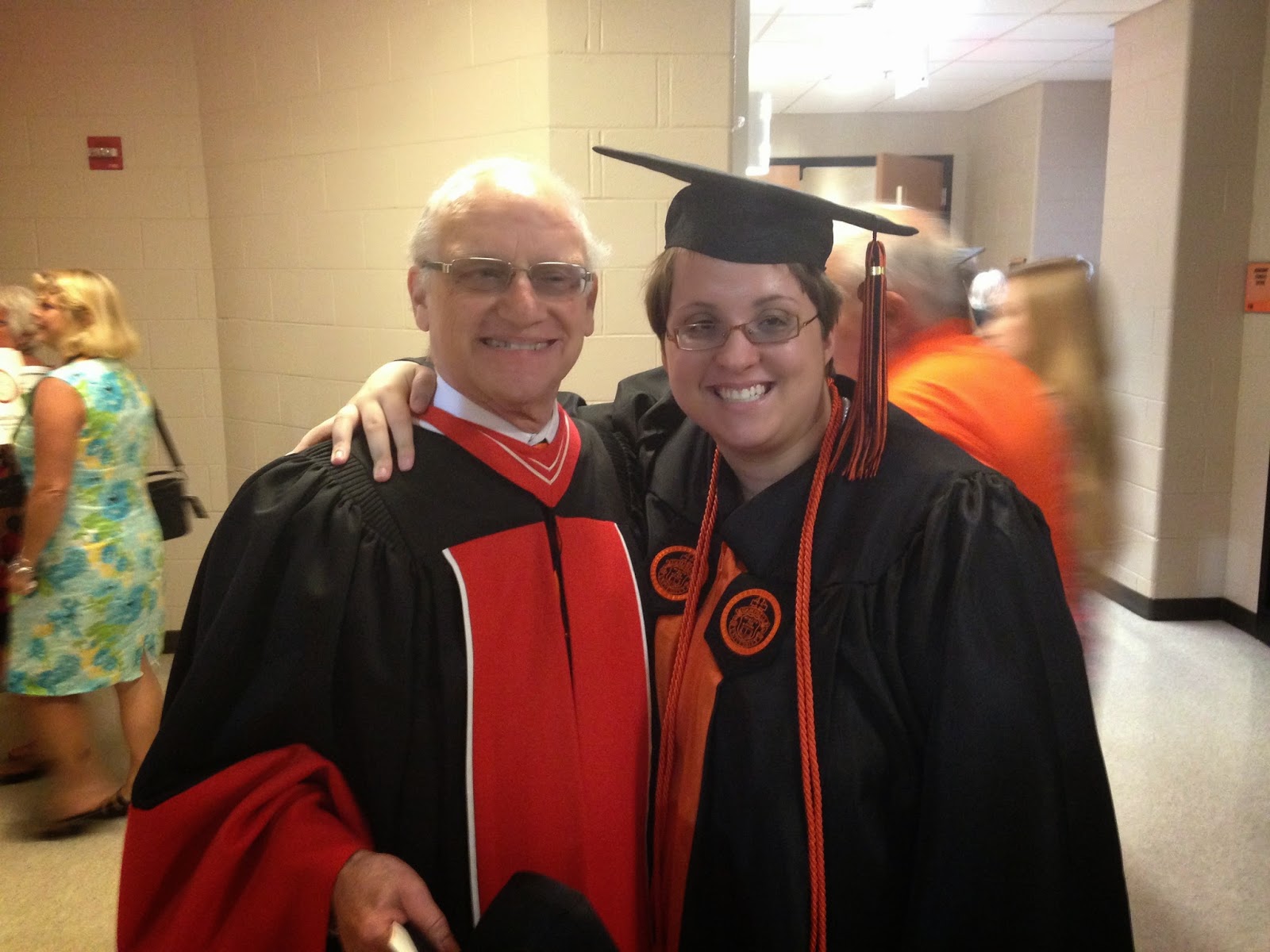 It was so lovely to get to introduce him to my mom and family.

After that, we headed outside.  On top of my family getting seating in the Gore Box in the arena for the ceremony, somebody from the administration came and told us that we were invited to the luncheon in the alumni room in the cafeteria.  Thankfully, Mom didn't complain about me wanting to get pictures with some people before we left.

Matt had to leave to go to work, so obviously he was first.  This kid...I wouldn't have made it here without him.  Not only did he save my life so many times, he told me for as long as I can remember that I would have a future like this, even when I didn't believe him. 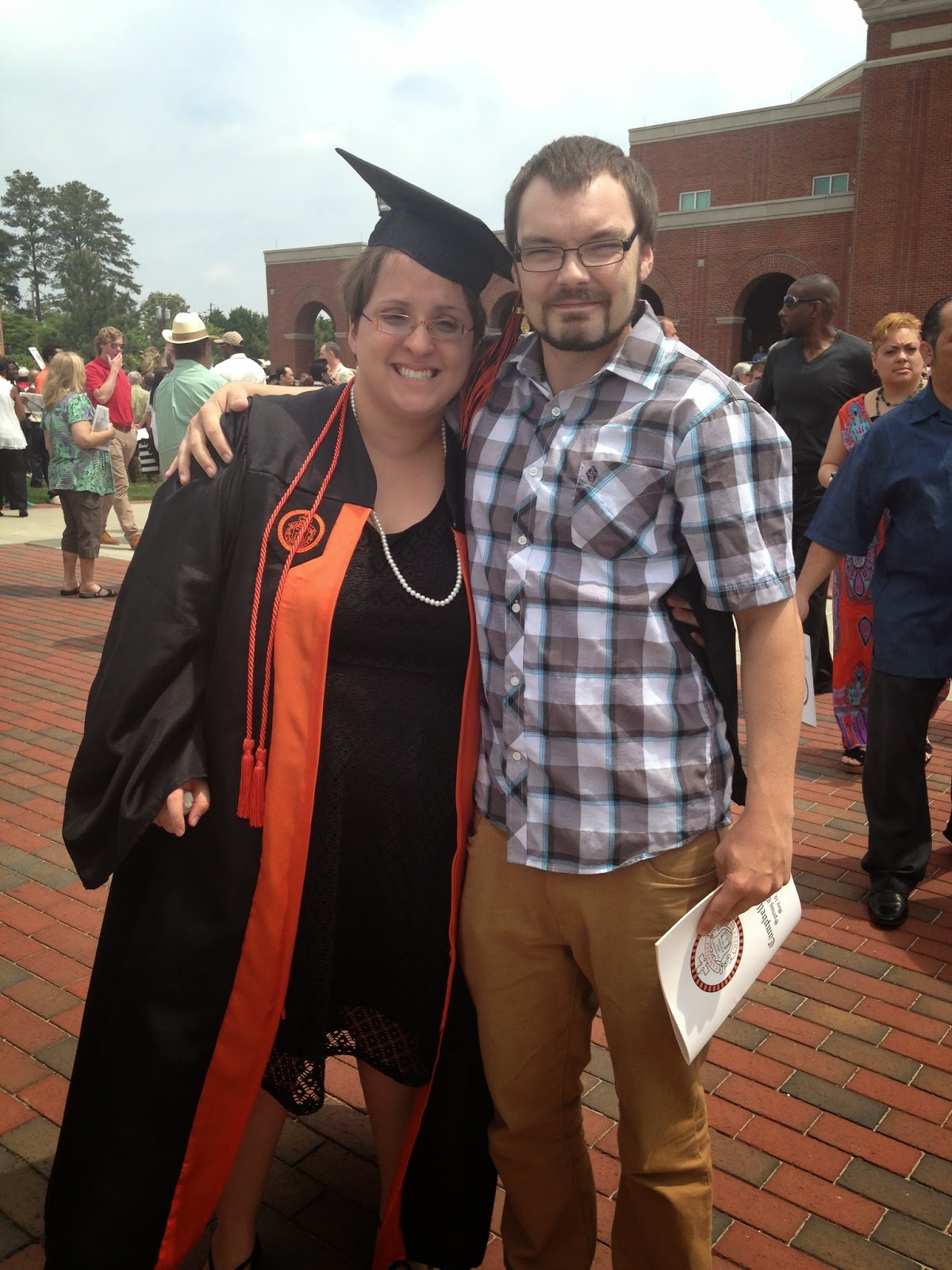 I took my cap and gown off to walk through the crazy mass of people because it was so blasted hot.  I couldn't find anyone I knew for a while, until I finally ran into my friend Zack. 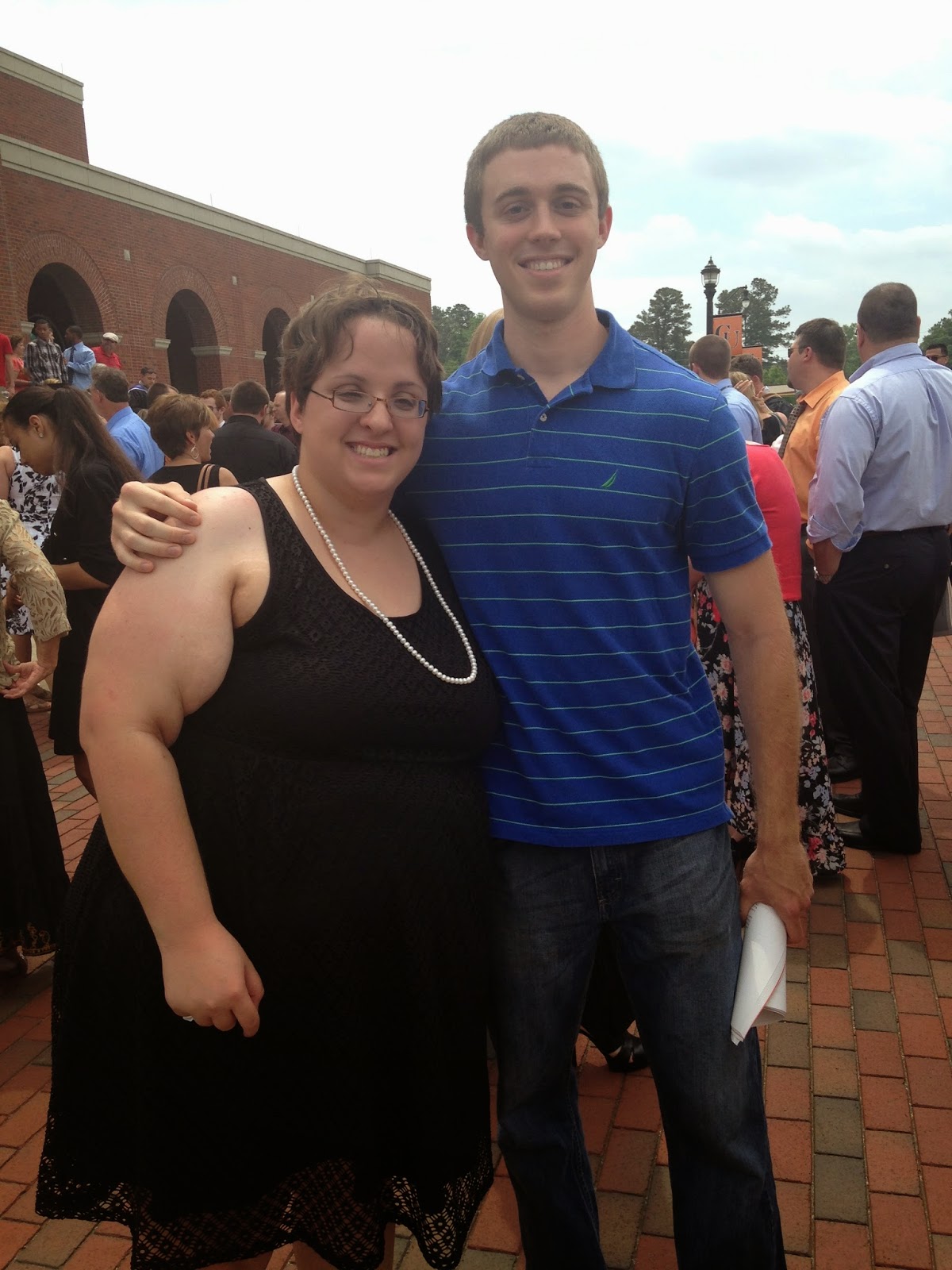 My family was texting me to come back because the lunch was starting, so I walked back and got my cap and gown back on, and then I started finding people.  Of course.

I saw Gabe taking pictures with his family right nearby, so I got a picture with him.  It's been an interesting ride with this guy over the past few years, and I'm glad we could end on a good note.  I am, after all, his favorite communist. ;) 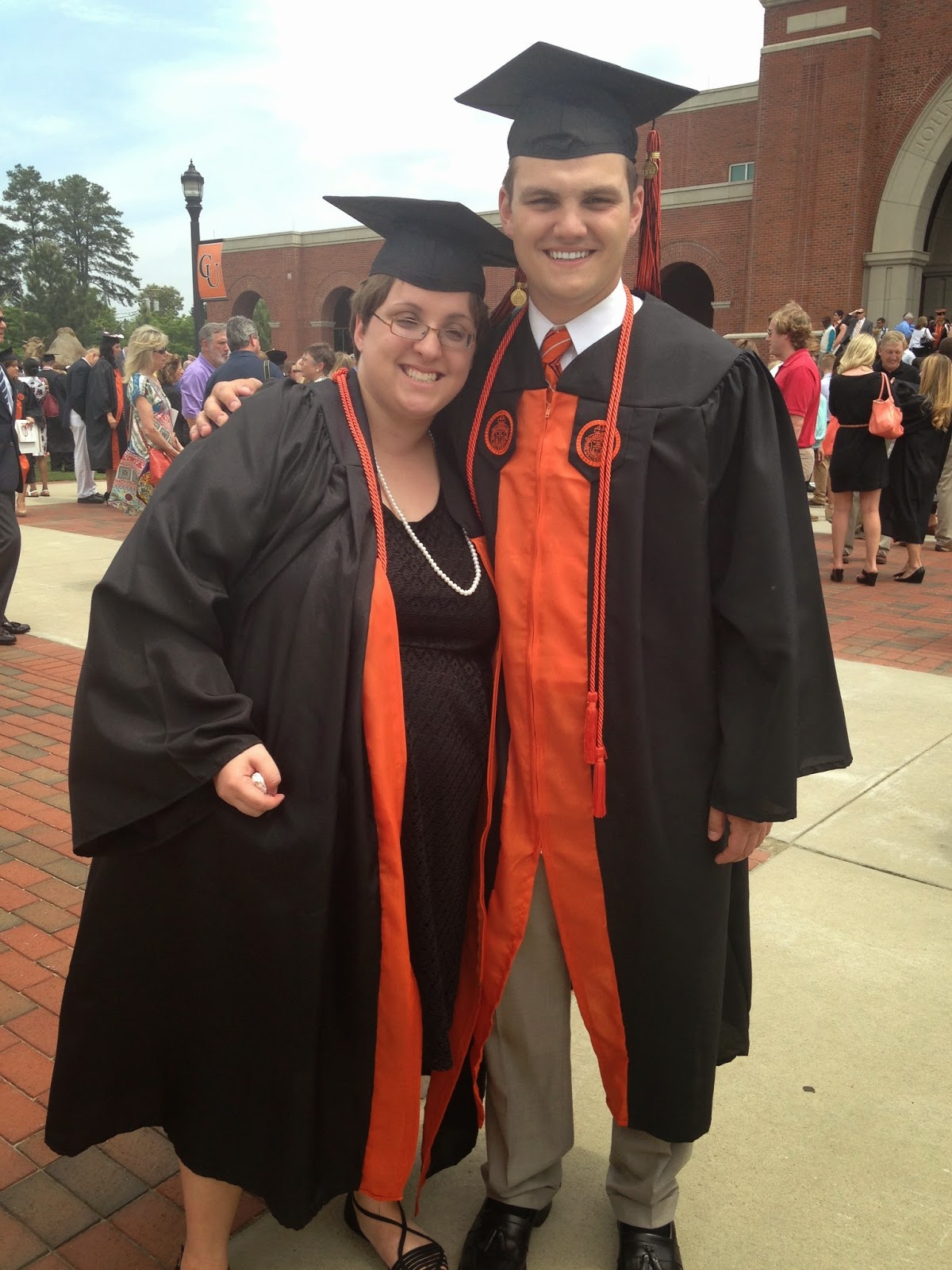 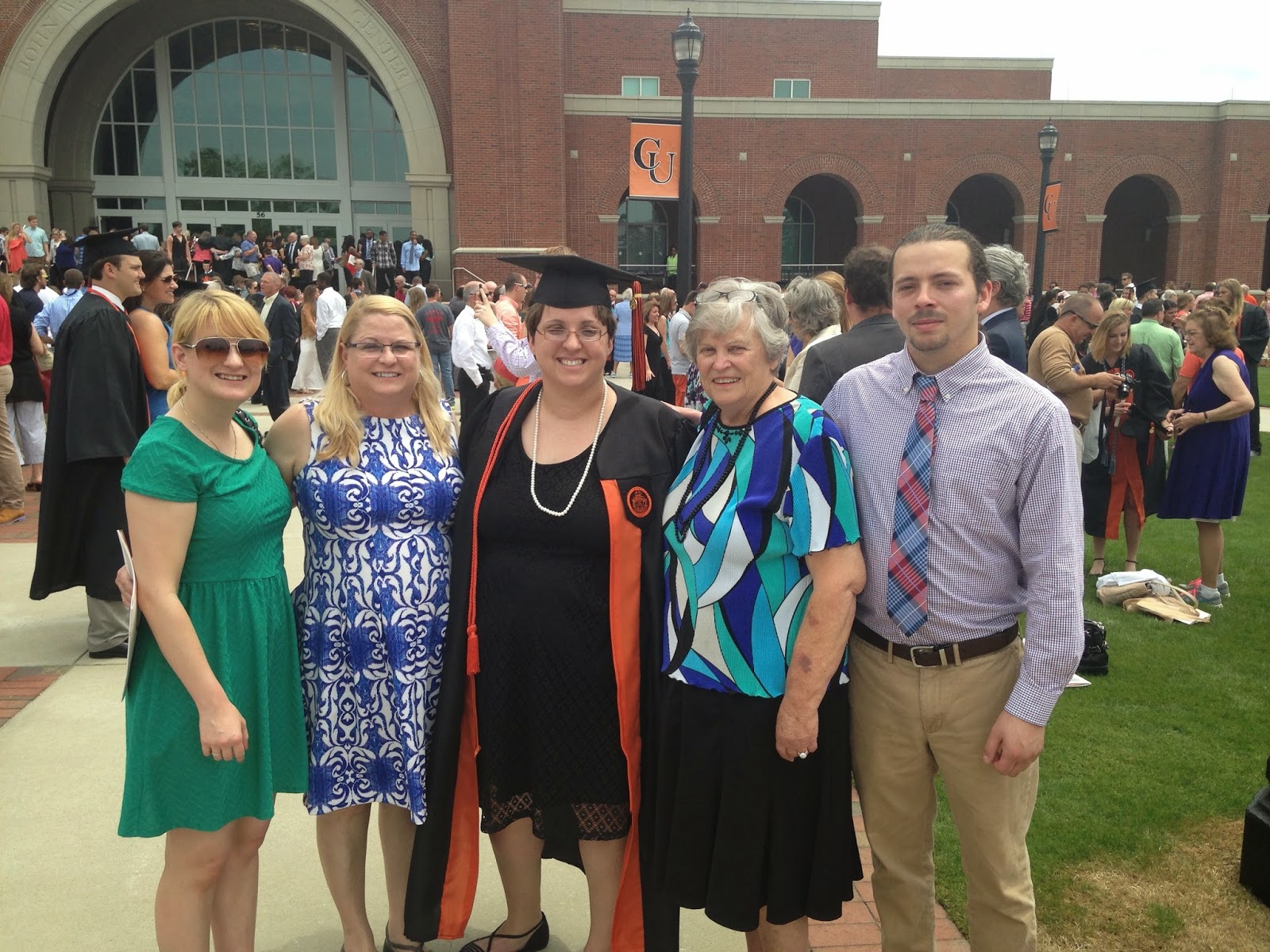 This is Mercedes.  I just met her this spring at the soccer game, but small world as it is, she's Ryann's cousin!  I stuck my foot in my mouth so many times when introducing her to my mom, but thankfully she forgave me. :p 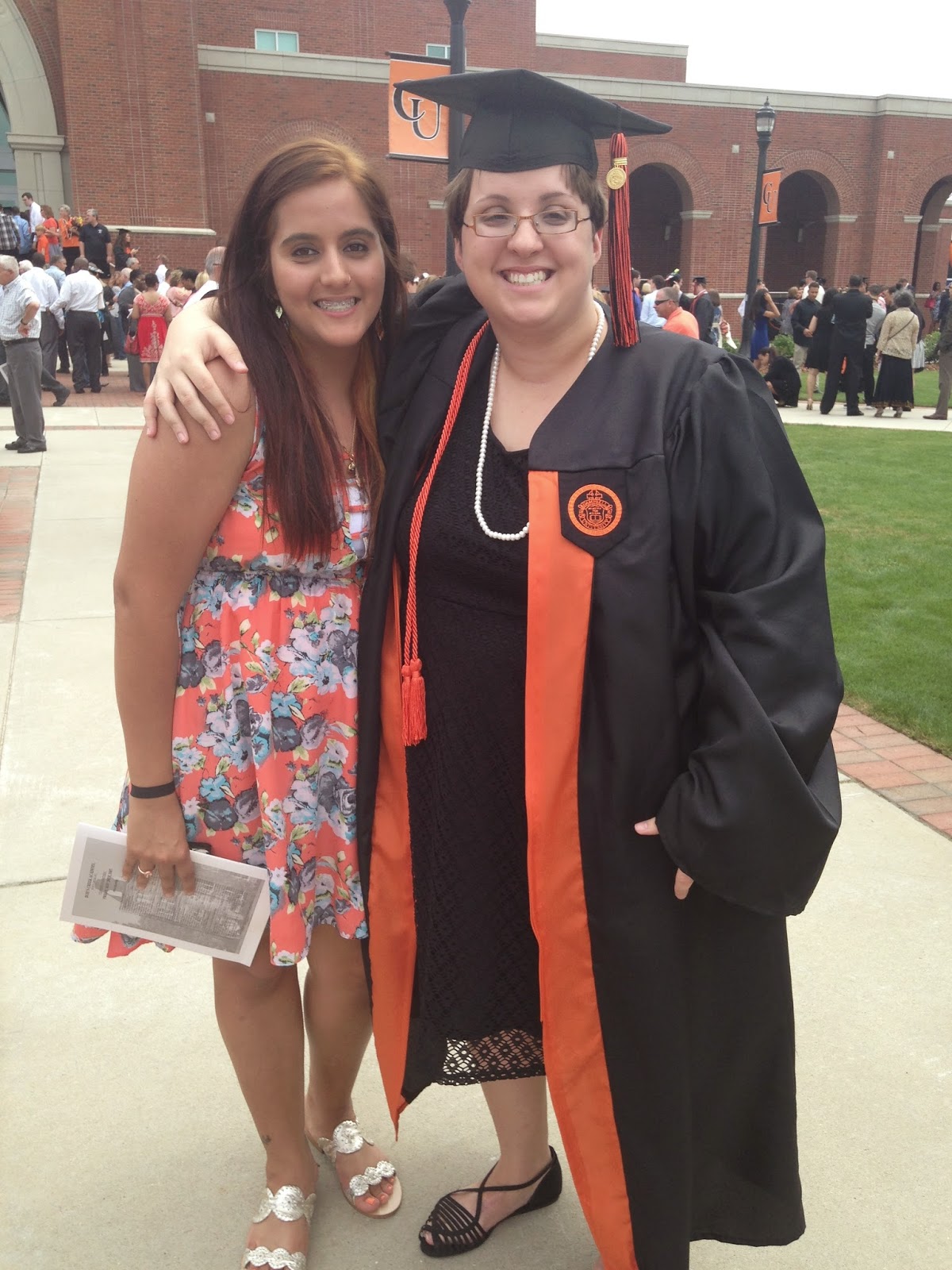 Dr. Stanke...yes, this was the best picture I could get with her, hahaha. 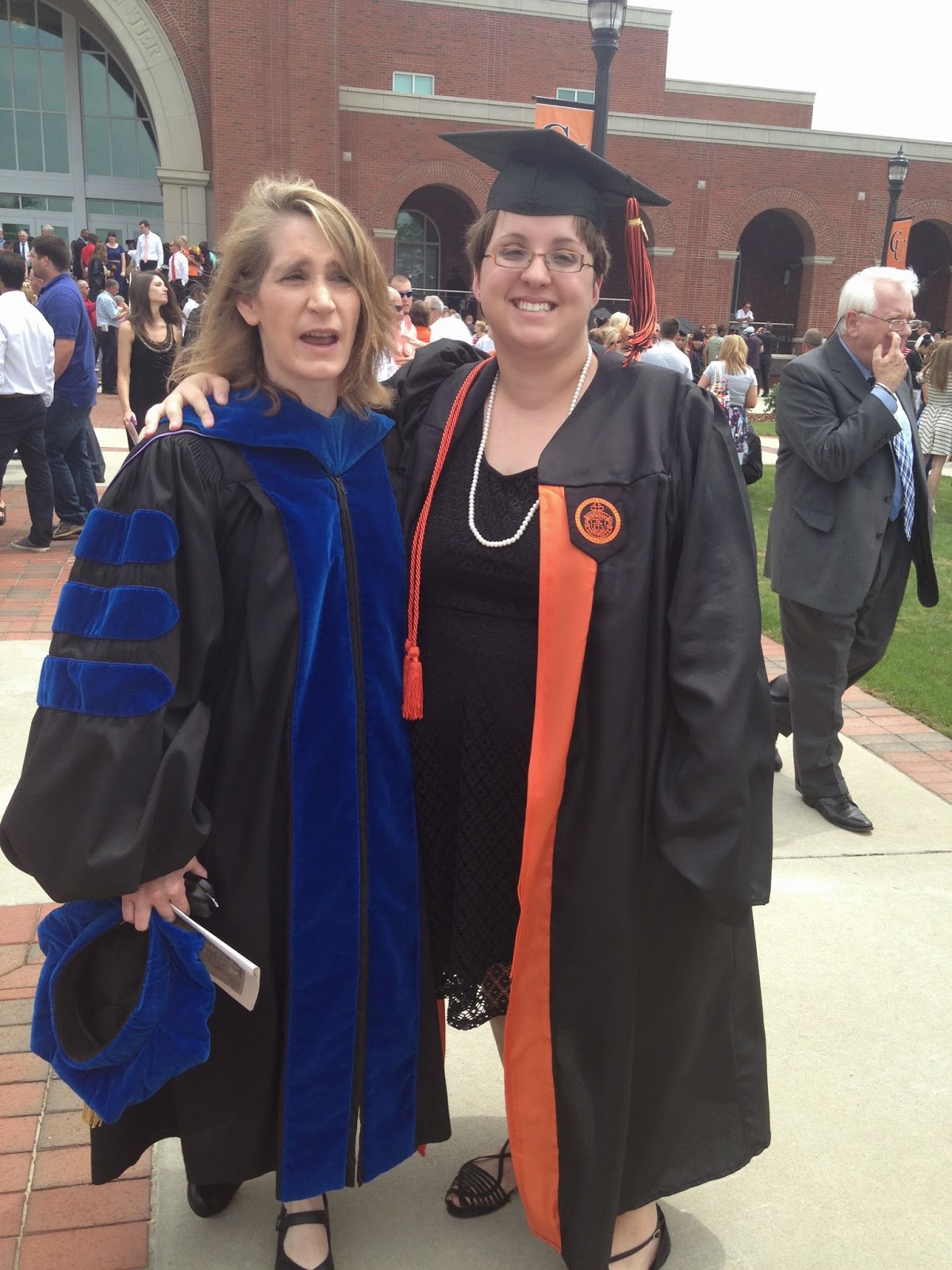 I am SO HAPPY I saw Ethan and Aleksi, the two soccer boys that are graduating, and got a picture with them. 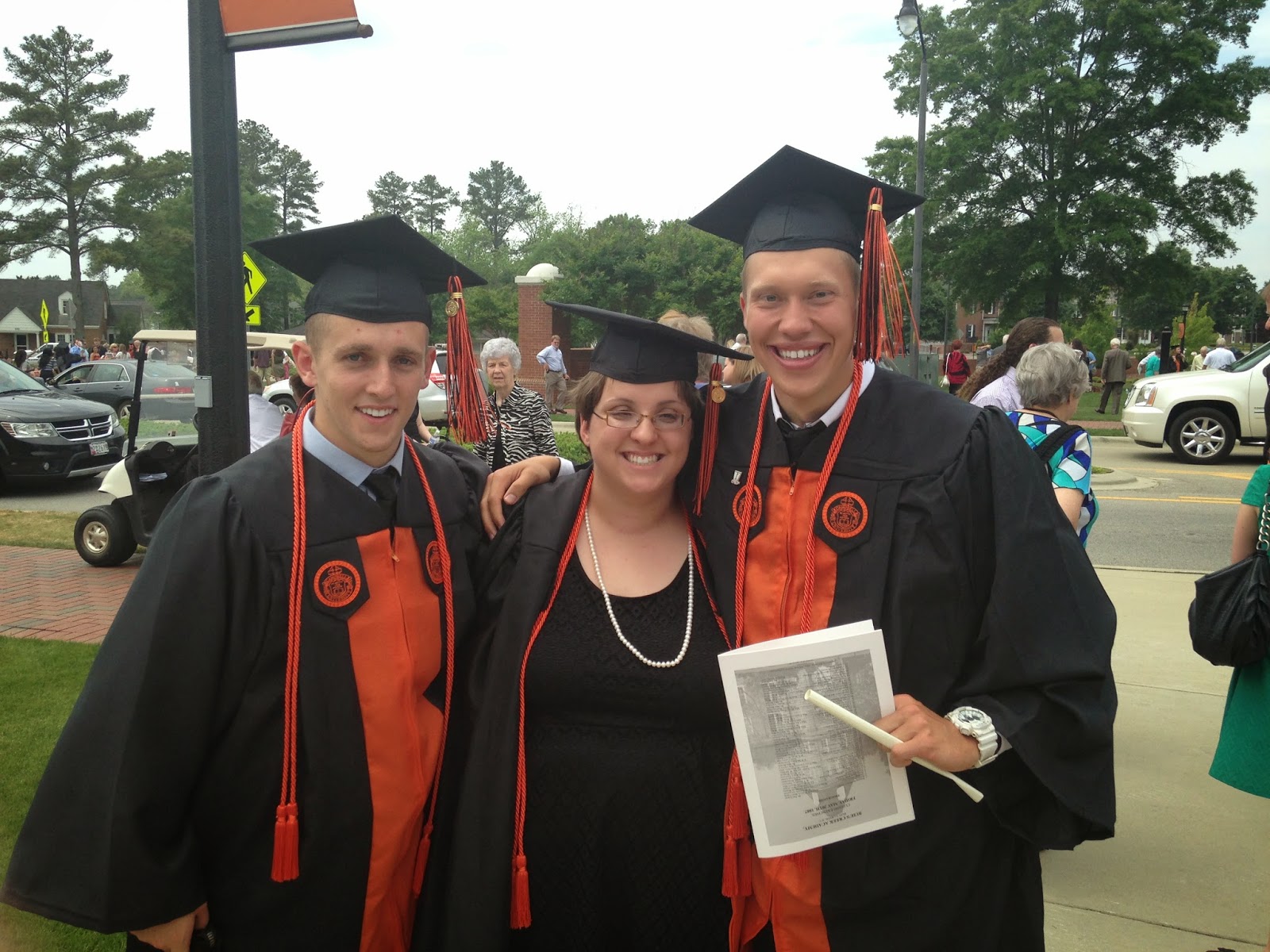 By some miracle, Clayton saw that I called him in all the craziness, called me back, and came and found me for a picture. 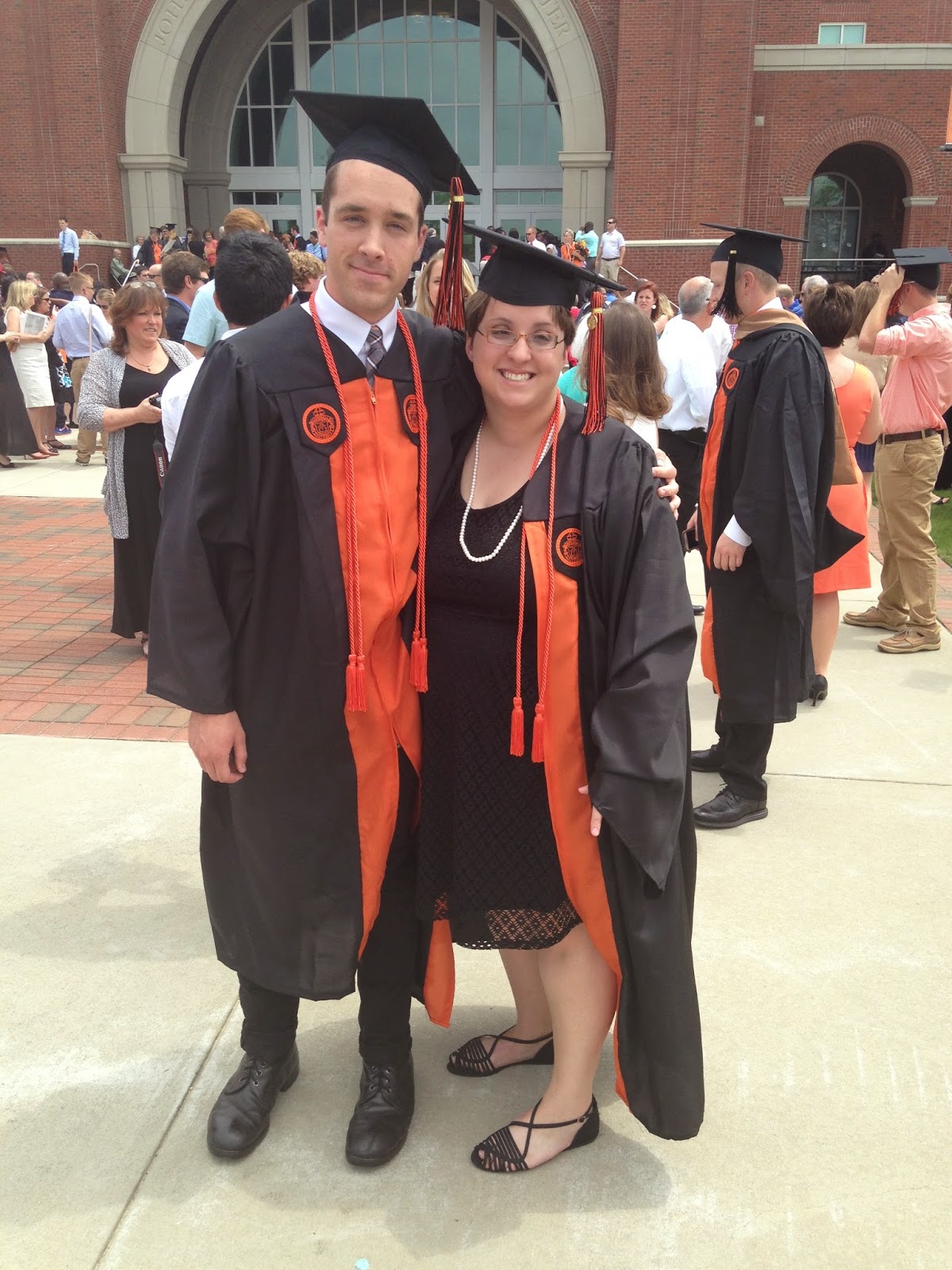 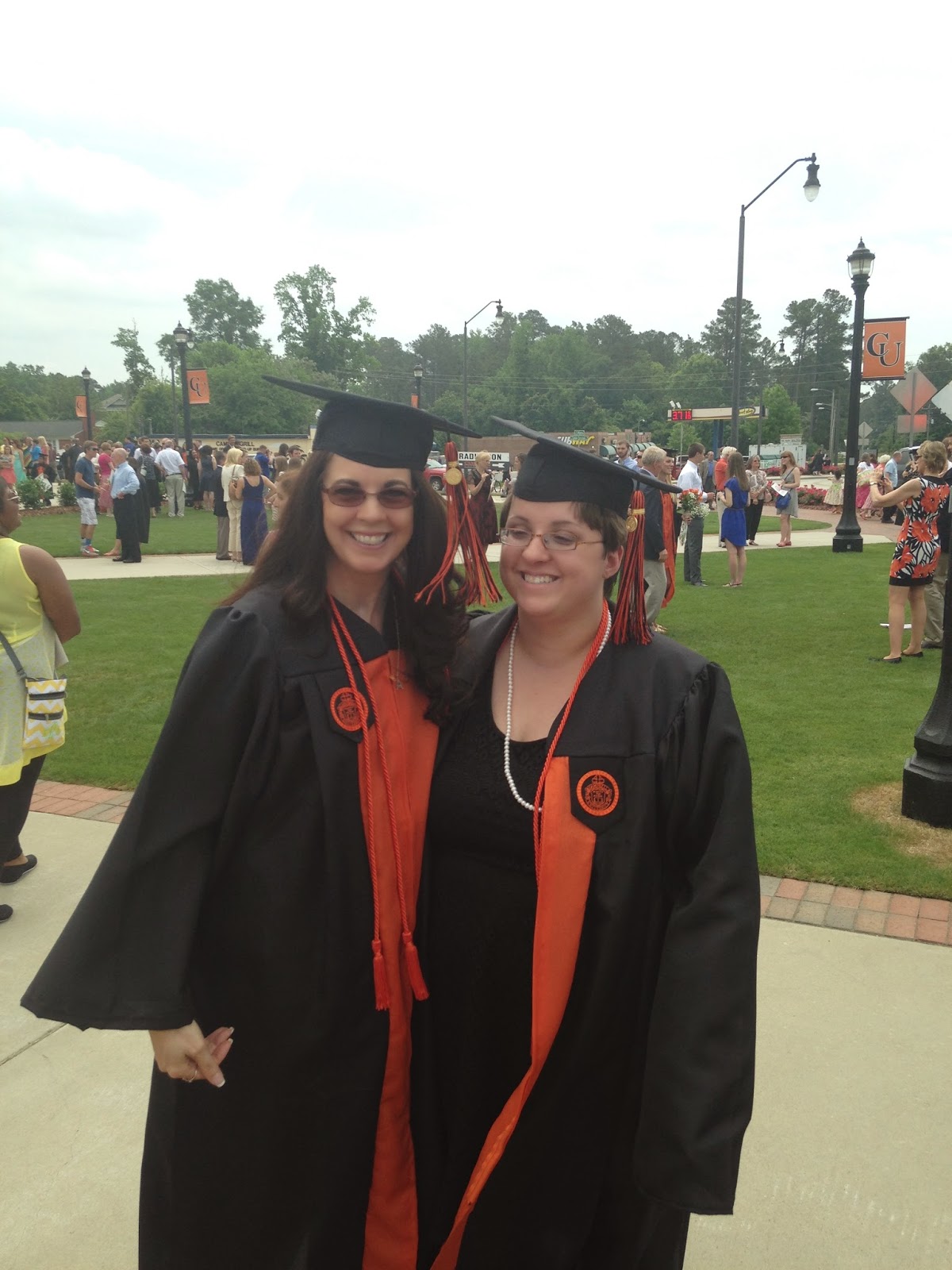 Keegan.  The grad assistant for the soccer team. Also treats me like family. 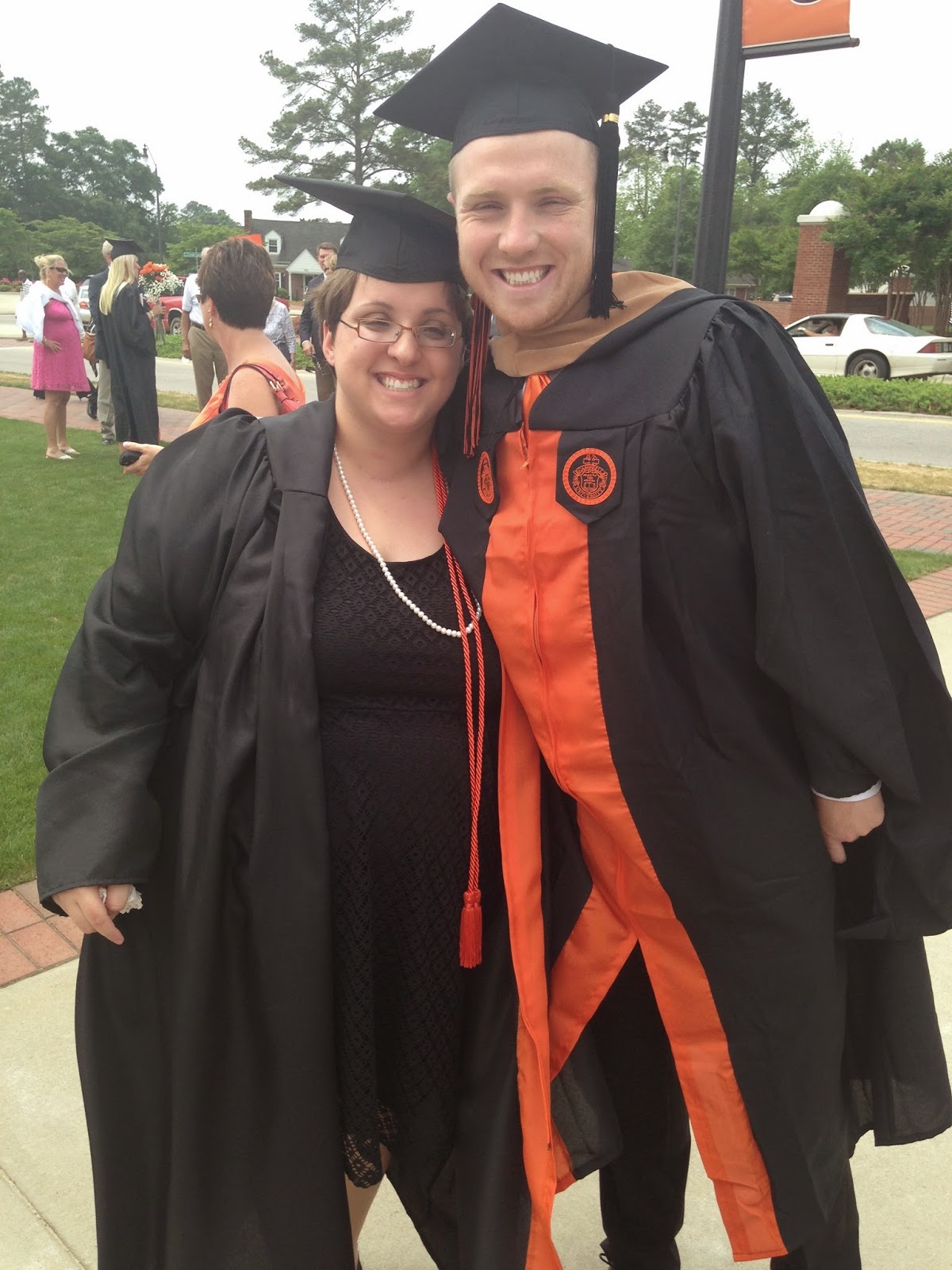 Then, it was getting pretty late, so I gave up and headed to Marshbanks for the lunch.  There were only a few people I didn't get pictures with, and I still got to see them, so I call it a pretty successful day.  We really were getting the star treatment today; we even had a chauffeur over to the cafeteria.

The food was incredible.  Uncle Ed spoke for a second about me, and the chairman of the Board of Trustees spoke about his son who graduated today, too.  We ate and talked to a few people and got some pictures.

The whole family with Uncle Ed.  What an angel. 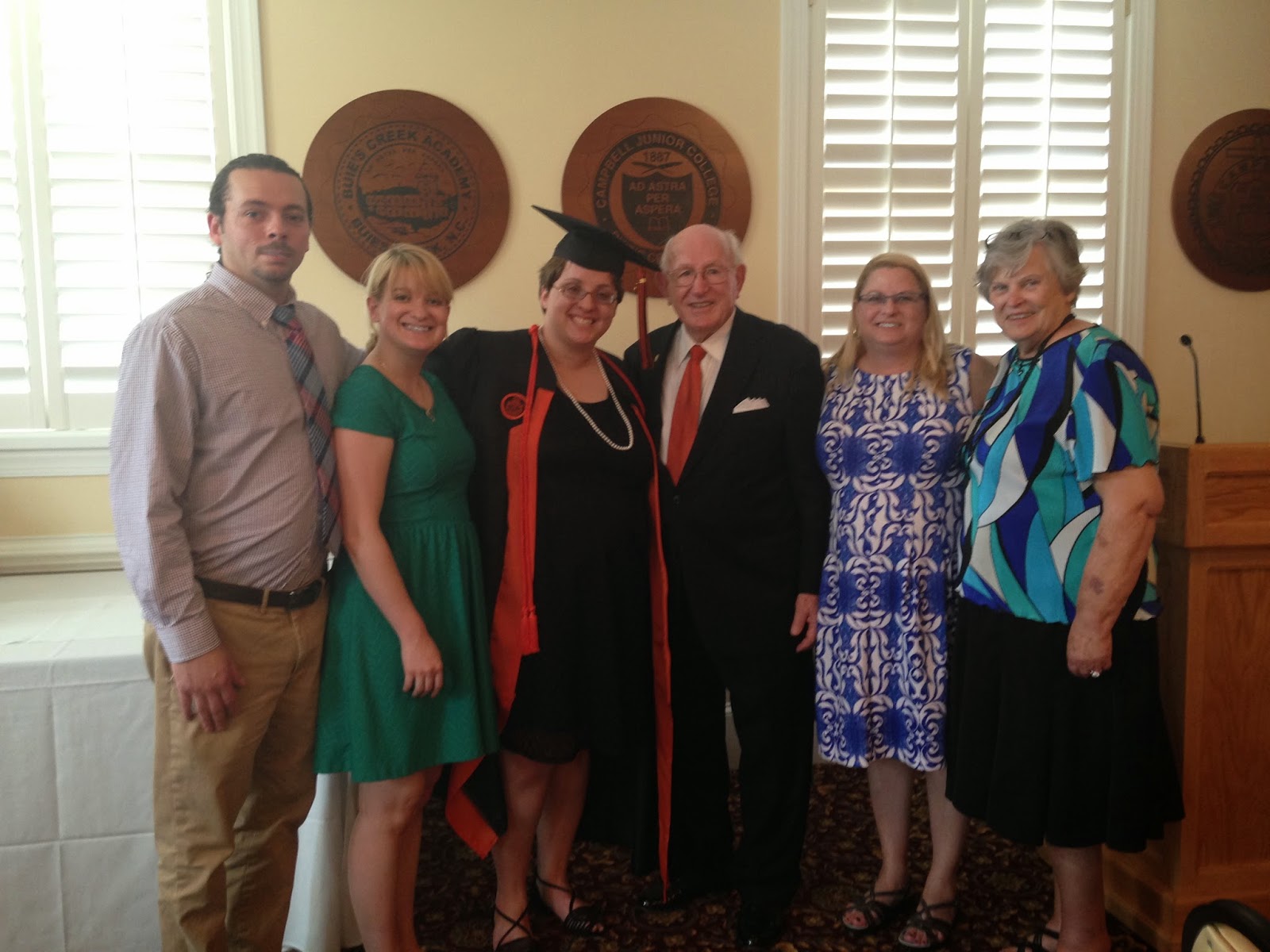 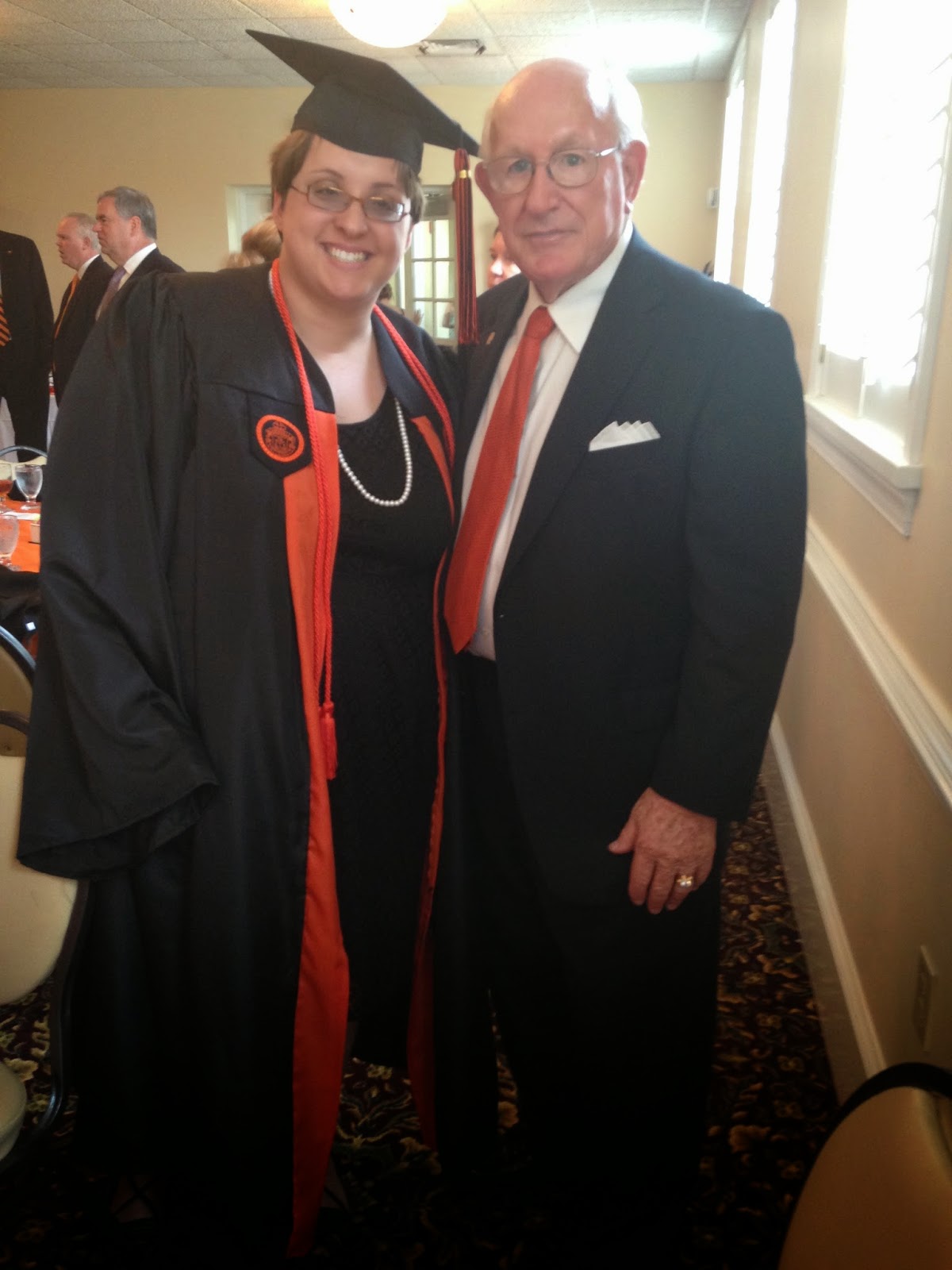 me and Dr. Jones - we were still laughing about the jokes we made at the Awards Banquet 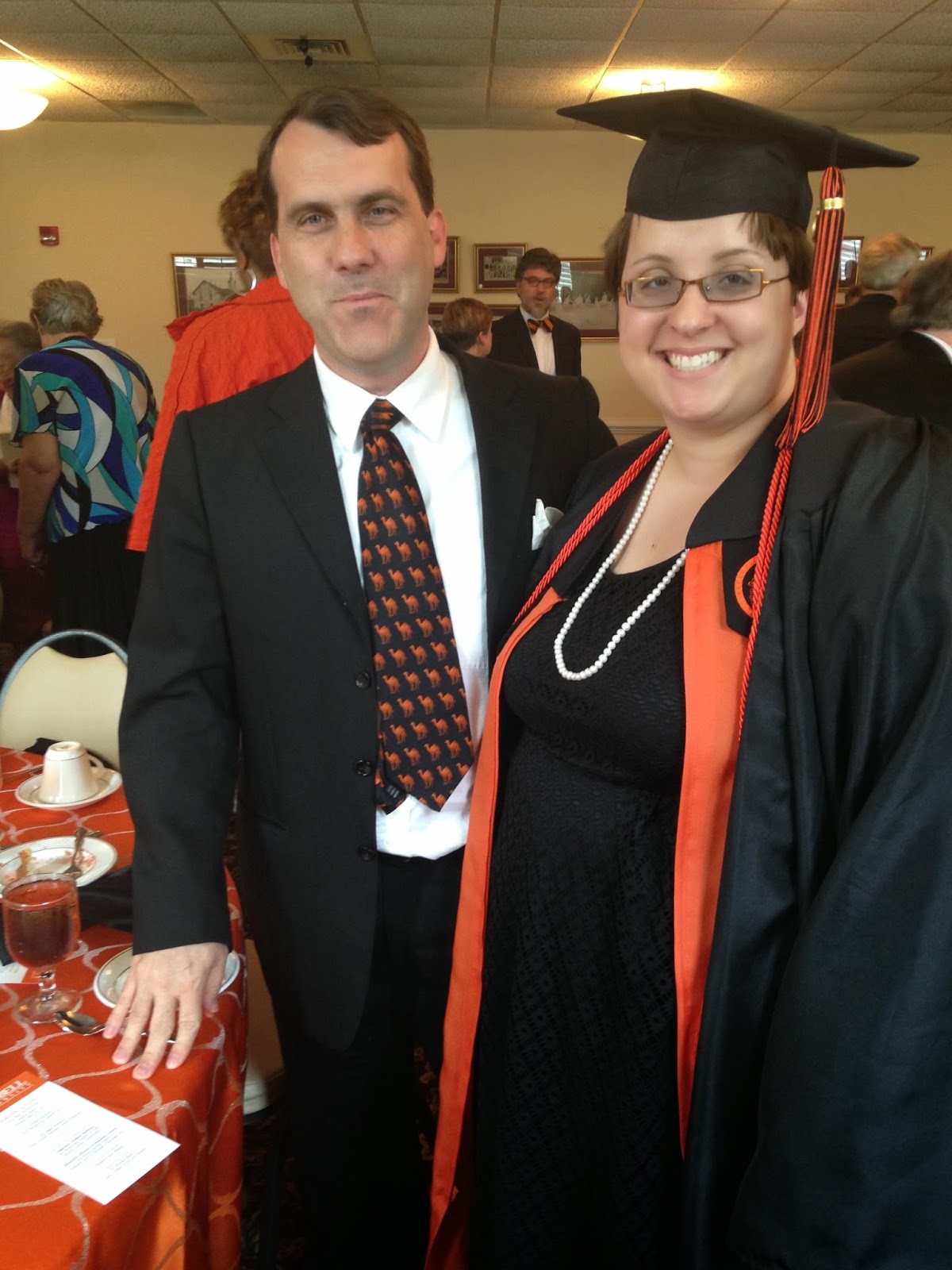 After lunch, Mom and I went to D. Rich, which is thankfully right near the cafeteria, to look for Dr. Mero.  He had warned me that he liked to hide out in his office after graduation to avoid the crowds and craziness.  And amazingly, Dr. Thornton was there, too!  The four of us sat in Dr. Mero's office talking about NYU, and they gave me some tips about looking into assistantships while I'm there.  Eventually, Mommom started getting annoyed so we kept getting texts and calls that we needed to leave, so I got a picture with each of them before we headed out. 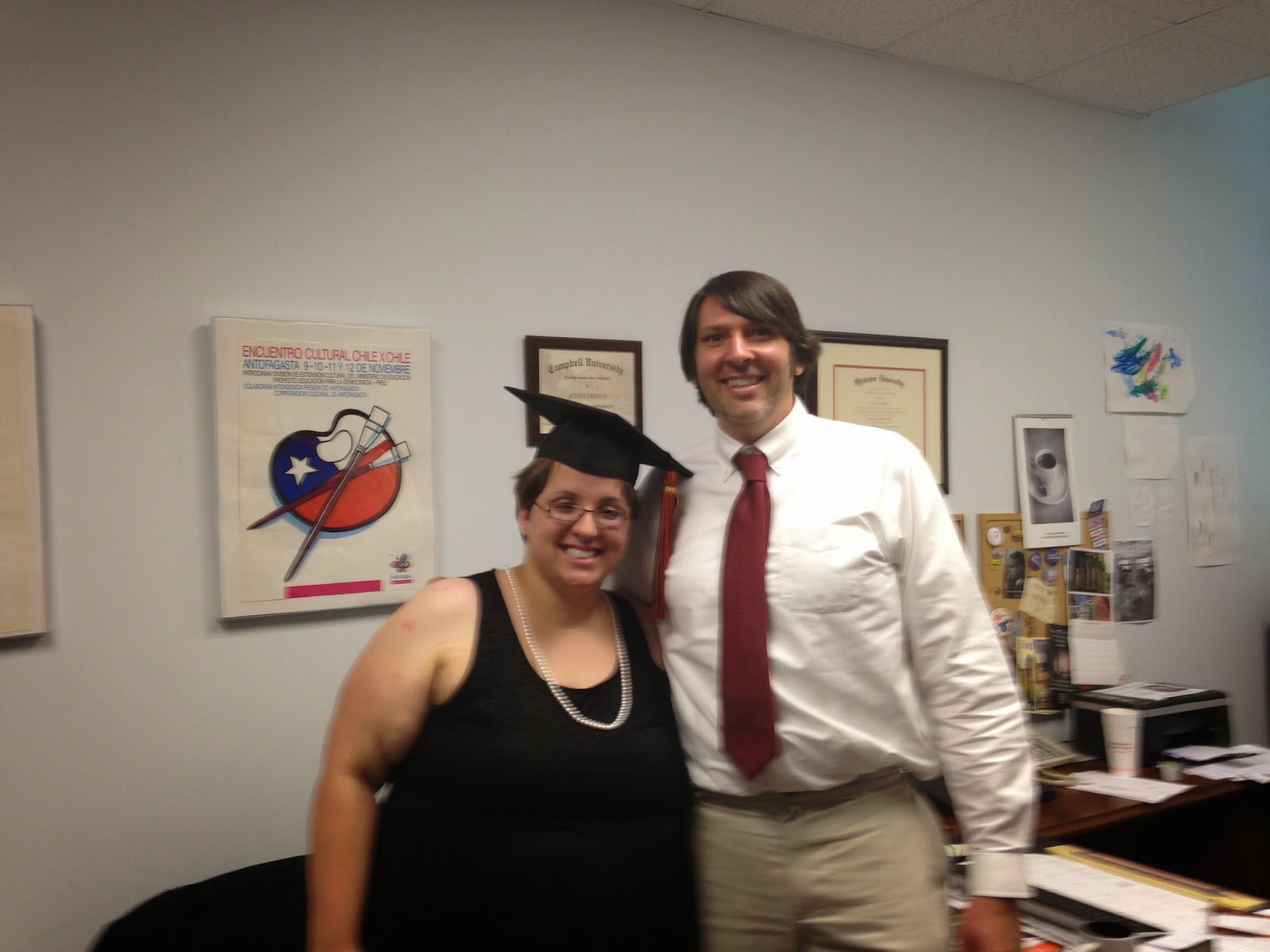 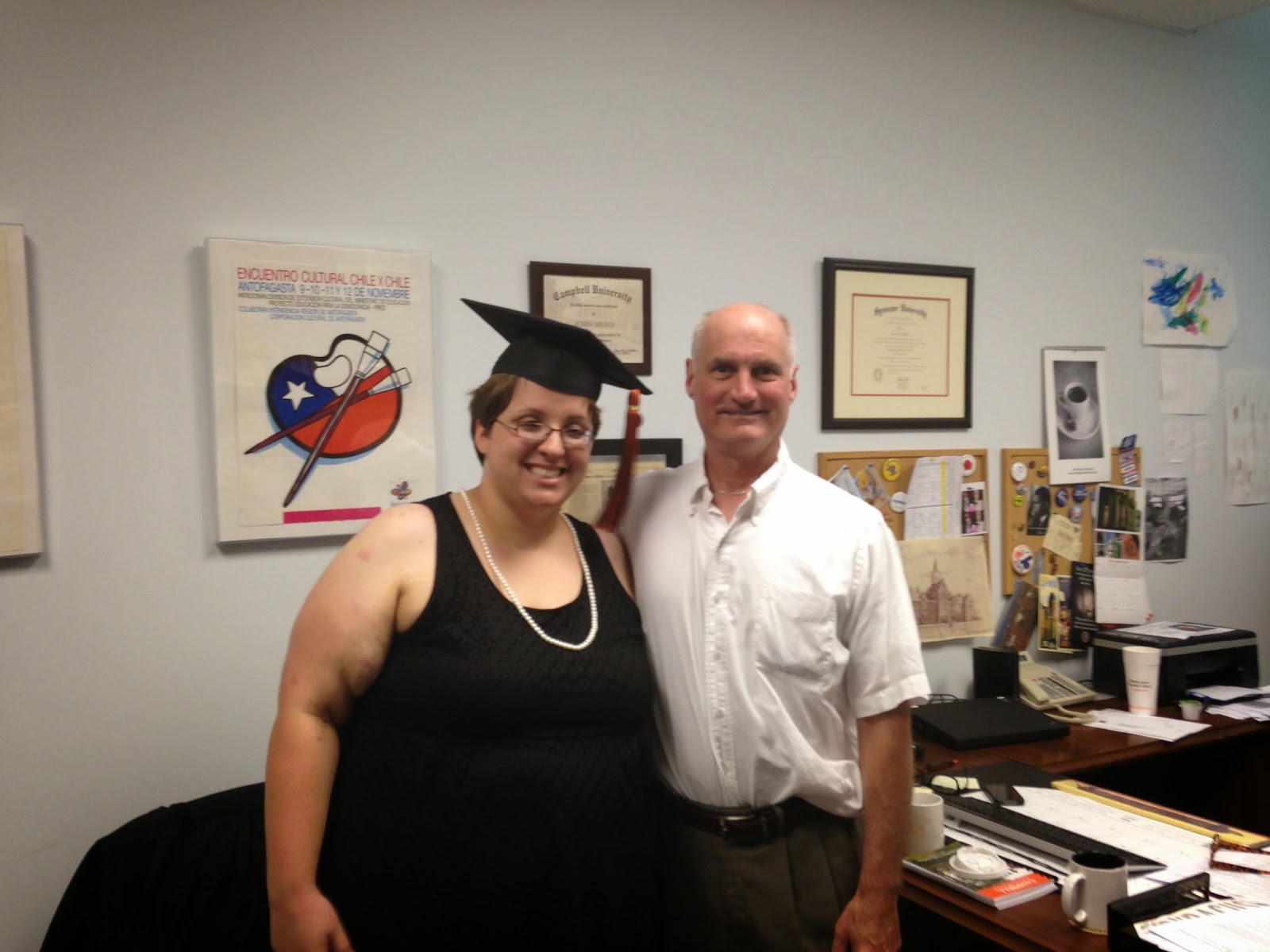 We got a ride back to the parking lot behind the convocation center and gave hugs to Holly and Michael before leaving.  Mom and Mommom took me to make one last special stop before leaving campus for the last time... 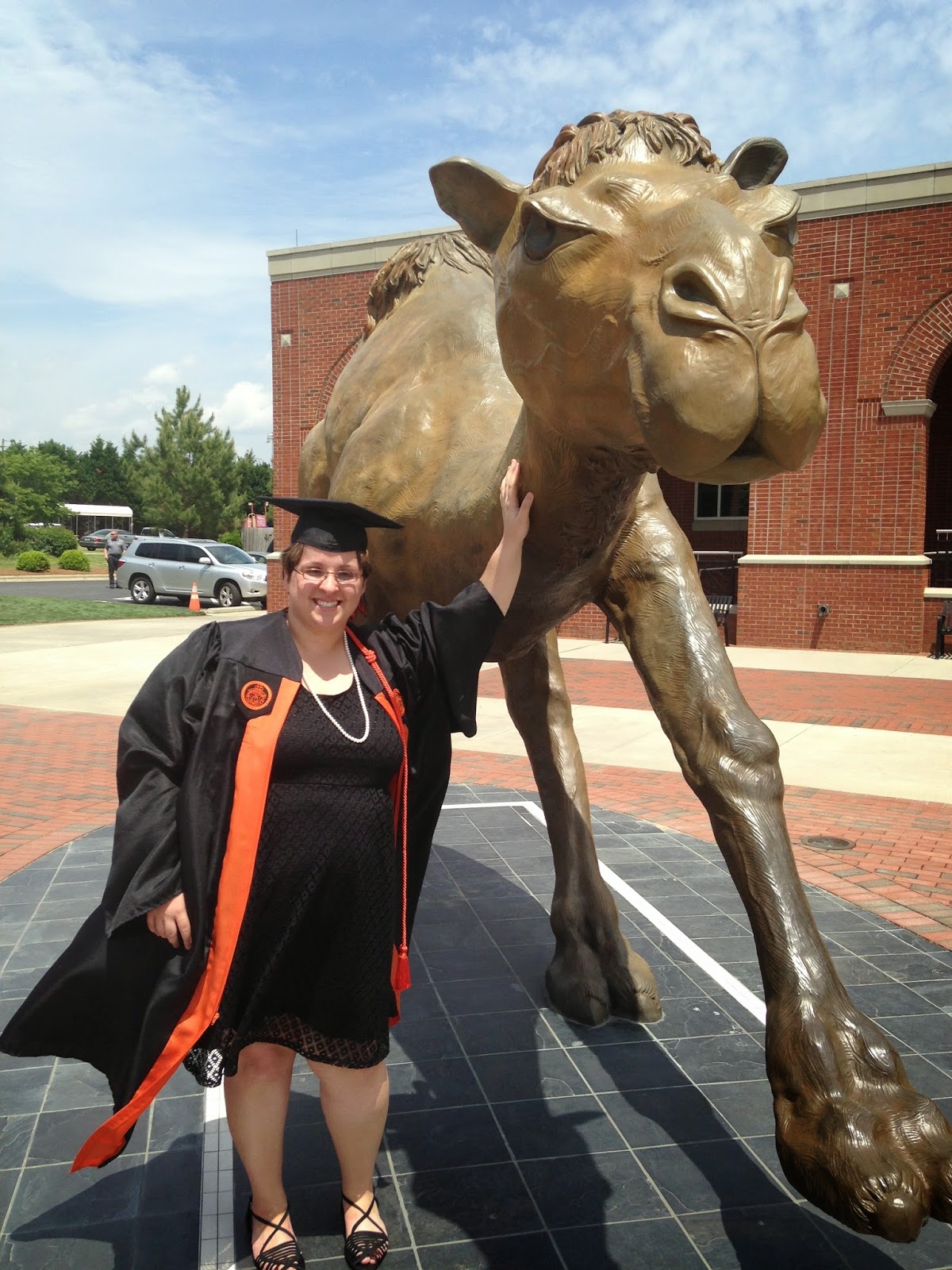 My last picture on campus the day I graduate from this amazing home of mine?  Of course it would be with the camel!  (Too bad my honor cords were totally out of whack.)

We left about 2:00 and headed home.  We unpacked and collapsed in bed.  Since we weren't up for going anywhere, Mom let me order my favorite bread bowl from Domino's.  And then, as I said, I fell asleep.  I sure know how to party.