That time I acted like a stalker. Sort of.

One good thing about going to a small private school with a very nicely-padded bank account is that they have the funds to host concerts.  Usually there's just one big spring concert a year, with a huge name coming.  Last year it was OneRepublic, this year it's the Goo Goo Dolls.  Well, on top of the big spring concert, which is in a couple of weeks, they scheduled an extra, smaller concert tonight.  The guest was Phillip Phillips, who, in case you don't know, won the eleventh season of American Idol last May.  I don't watch American Idol, but I sort of fell in love with his music after he won.  So, uh, needless to say, I was pretty stoked to hear he was coming to the Creek.

The tickets were given out a couple months ago (students got them free), but the person giving them out couldn't tell me if there would be strobe lights at the show, so I didn't want to take a ticket and keep someone else from going to the show and then not be able to use it.  Well, this afternoon, I was tutoring this girl named Paige, whom I really consider a friend at this point, and we were talking about the concert and how excited she was.  She mentioned that a friend of hers works on the Campus Activities Board (who handles all of the concerts) and they had been making jokes about stalking the building in order to run into Phillip.  I told her about how I couldn't go to the show and why, and she said her friend had told her he'd be getting there around 4:00 and asked if I wanted to go over there.  I didn't have anything else to do for a while, so I said sure.

We ran into a couple of guys from his opening band, Churchill, (who is really good, by the way, check them out!) outside the building because the entire first floor of it was basically barricaded off aside from the back stairs so people who had class on the second floor could get up there and even there there was someone posted to make sure no one snuck in where they weren't supposed to be, but all they could really tell me was that yes, there were strobe lights.  I saw one of the Campus Security guys that I know really well, and he told me to talk to the CAB workers who were all over the building.  I found two of them and told them what was up, and they got the guy who is basically in charge of CAB.  He couldn't do anything to help, and I was crying and just about to give up...and then I remembered that I know basically the entire administration thanks to my Uncle Ed.

Now, anyone who knows me knows I'm not one to go looking for special treatment or pull the "my uncle's really important at this school" card, but I was pretty desperate.  So I started calling the ones I knew the best.   The first two didn't pick up the phone so I'm assuming even their secretaries weren't in the office.  The third (the, ahem, President of the University) couldn't do anything but transferred me to the guy who used to be the Dean of Student Life.  His secretary said he wasn't even on campus today, but I told her what was going on and she told me to let her see what she could do or find out, so I gave her my number.  A little bit later, I got a call from a number I didn't recognize but that I knew was from somewhere at Campbell.  Turns out, it's from the new Dean of Students.  She handles really dealing with the students, and the former Dean of Student Life hired her so he could focus on all of the administrative stuff.  If I had known she'd be the perfect person to talk to, I'd have called her first, haha!

This woman?  AMAZING.  Basically the first words out of her mouth were "Oh, I'll get you in."  Turns out, she's the head of CAB.  She told me to let her make some calls to figure out how to make it happen, so I told her I'd go over to the Student Center, where her office is on the second floor, and wait down on the first floor for her.  I managed to get dinner and watch TV, and she came down just after 6:00.  She sat there while I finished eating and we talked, and she was just so, so nice.  Then, we headed over, and basically just waltzed right in the building.  One of the CAB leaders told us which room to go in, and a few minutes later, a bunch of the CAB and Student Government (SGA) members came in (those lucky ducks get to have personal meet and greets with every musician that comes) and we had a meet and greet.

Of course, there were all sorts of rules.  No personal pictures, no signing anything, don't hug him or kiss him (yes, the tour manager actually said that).  Get a picture with him on the SGA's camera, grab a signed photo of him from the tour manager, and get out.  Like, really, all he said to me was "Hi, what's your name?"  But dang, he was so incredibly good looking I'm lucky I remembered my name! :p  It'll be a few days before I get the picture from SGA, but at least I have this to treasure in the meantime. 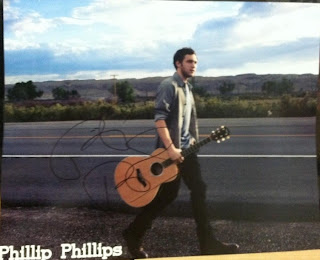 Seriously, I can't believe stuff like this happens to me.  I am so blessed by God and by this school.  This week is turning out to be even better than I imagined.  I guess persistence really does pay off.  And also, I apparently have no fear.  Or dignity. ;)

This is actually Phillip's "coronation song", aka the song he released immediately after he won American Idol, so it's his most well-known song, but it's also my favorite of his.