Boys, don't give me another heart attack on Saturday.

Please? It'd be really nice if you could kick Ghana's butt in 90 minutes, and not wait for the added injury time to score. Landon Donovan, you are a hero.

That game, in general, though...God, I was so stressed out by the time they got to the 90 minute mark, I covered my head with a pillow because I was so afraid that we weren’t going to pull it off and was tired of watching failed shots on goal. So OF COURSE, they score as soon as I do. Thank heavens for instant replays. ;)

Speaking of replays, there was one goal in the first half we made that should have been counted! They replayed it and proved that it wasn’t offsides, but of course soccer doesn’t review calls. Gah, still kinda mad about that...mostly because we wouldn’t have been so dang stressed out the whole game if it weren’t for that bad line judge.

And since I totally wouldn't be a girl if I didn't comment on the hottest guys, I'll show you them. :)


First, must give props to the man known around the country, 28-year-old midfielder and vice-captain Landon Donovan.. 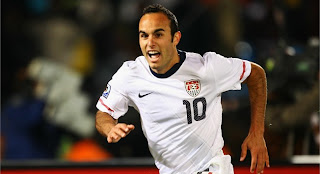 Second, the man whose goal SHOULD have counted in the first half, 27-year-old midfielder Clint Dempsey. 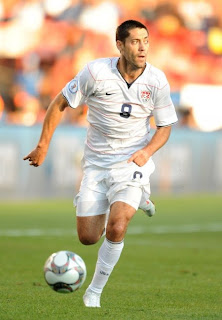 Third, 28-year-old defender Oguchi Onyewu.  One, because of those abs, and two, because I think he has a really cool name. :) 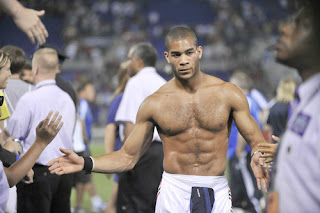 And saving the best for last, 31-year-old defender and captain Carlos Bocanegra. 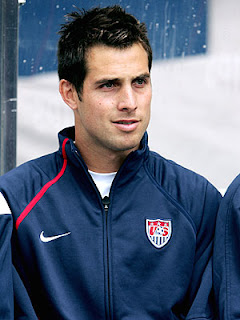 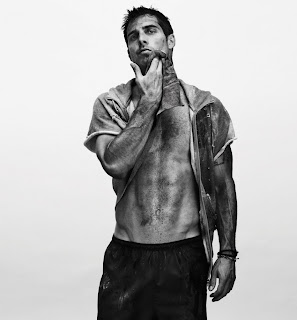 Yes, he's such my favorite that he gets two pictures.  Mmmm, mmmm, gooooood.
You're welcome. ;)