I made my confession, never looking him in the eye because I knew I couldn't without falling apart.  And then I finally looked at him, cautiously waiting for his reaction.  Waiting for the hammer to fall.  Waiting for him to get up, hurl words of condemnation, and walk out of the room.

Instead, he looked me straight in the eye, never wavering, and said, "And?"

...even though I thought I understood what grace looked like, I really had no idea how deep and wide the mercy of Christ is.  That he looks at us when we lay ourselves bare before him, with all our ugly truths and realities, and says, "And?"

~ Melanie Shankle, Big Mama, "The Antelope in the Living Room"

I find it funny that a scene from a book on marriage would be the first thing that popped into my head after what happened tonight, but it did.  And I knew I wanted to include it here, because Melanie's words mirror exactly what happened tonight, just in a different scenario, and she did it much more beautifully than I ever could have.  (Also, go buy that book!  And her first one, "Sparkly Green Earrings".  I'm not a wife or a mom (obviously) and I laughed until I cried from the beginning to the end of each of them.)

I'm not sure if I've ever written something out here.  I'm going to err on the side of no because of the fear that the person it was about might actually find it, but now he knows, so there's no holding back.  But if I have already said this here, sorry, just go with it.  This isn't the important part anyway.

I have feelings for Austin.  Shocker, I know.  I have since November, but I didn't tell him because I was scared.  Again, another shocker.  Scared that it would change everything.  Scared that I'd embarrass myself.  Scared that I'd lose him.  And I continued not to tell him because I had a pretty good feeling that he wasn't interested.  Austin's an introvert, yes, but with the people he's close to, he can't hide anything, and considering I can look at him and tell when he's having a bad day without him saying a word, it's safe to say I know him pretty well.

But last Thursday, when I was talking to my friend Lauren, and the conversation turned to him and my feelings for him.  We discussed why I hadn't told him, and particularly how I had this fear that it would ruin our friendship.  That sweet girl point blank asked, "But do you really think Austin is the kind of person who would ditch your friendship over this?"  I had to say no.  The fact that he's one of the kindest people I've ever come across in my life is one of the reasons I fell for him in the first place.  I couldn't honestly see him freaking out at me over this, but anyone who's been in this situation before (which is, I'm pretty sure, everyone who ever lived) knows that that fear will run through your head whether it's logical or not.  And gosh knows there have been times that I've been in this situation where I didn't expect the guy to freak out about it and he did and I lost someone I cared about very much.  So I was nervous.  But after talking it out with her, I decided that I was going to tell him, because if I didn't, I knew there was no way I'd get over it.  Too much of my heart is invested in my friendship with him.

I couldn't do it Thursday night because he was going to bed early, and then he left first thing Friday morning and was gone all weekend, and when I texted him yesterday he said that he needed the night to study for a test, but that I could come by tonight.  I had told him the general time, and when I got to his room, he wasn't there but he was on his way back to his room.  He walked in a minute later, and he had a group of guys with him, but luckily they went in the lobby without me even asking for it, so we stepped in his room (right off the lobby) to talk.

All I could think was "Don't cry.  Don't freak out.  Don't stutter.  Just get it out."  And this is where Melanie's words come into play, because for some reason, I couldn't keep eye contact with him.  I spent most of the time staring at his bed, just willing myself to keep talking and get out what I needed to say without sounding stupid.  When I finished, and I finally really did connect gazes with him, he was...Austin.  He was the kind of person that is exactly the reason we clicked instantly in the beginning with all the qualities that made me grow to love him as much as I do.  He barely took a breath before he said, "Well that's okay."  He said what he needed to say, and I honestly don't remember all of it, but I do remember one specific thing.  "This changes nothing."  That? Was exactly what I needed to hear.

In all of my nerves, I lost sight of something I've known from the very first conversation we had: Austin knows grace.  Austin knows grace, and he understands how to give it better than just about anyone I've ever met.  I've told him some pretty big things about my past, and with each of them, it was as if he had looked at me and said "And?".  There was no (logical) reason to think tonight would be any different, and I am so thankful that I was right.  Because now I can go to dinner tomorrow with one of my best friends and know that everything is okay, that everything is exactly the way it should be.

The biggest reason that I am thankful for Austin, though, is that no matter what the situation is, no matter what is going on or what either of us is dealing with, he constantly points me back to the Lord, whether he realizes it or not.  And tonight, as I walked back to my room from his, all I could think about was the fact that the grace God has for me is infinitely deeper and wider than the grace that Austin has shown me over the past 5 months.  I was reminded that I don't have to be ashamed to tell God what is on my heart, not just because God already knows it, but because grace will cover it regardless of how bad or stupid I think it is.  It's still hard for me to accept the fact that God loves me endlessly regardless of what I do or don't do.  God doesn't see our mistakes, only the pure, clean righteousness of Jesus.  God's grace really is amazing.

And it's grace that I know allowed Austin to look at me tonight and tell me it was okay and that I am still one of his favorite people, a kind of grace I pray I learn how to show to people even more than I do now.  I want to look at everyone in my life, no matter who they are or where they've been or what I think they "deserve", when they make themselves vulnerable enough to show me their flaws and shortcomings and ugly truths, and only have one thing to say in return:

"And?  This changes nothing." 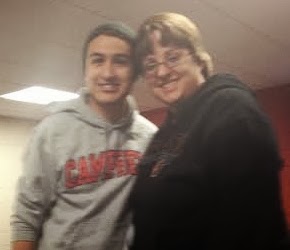