Community is a gift.

Thursday night, in all of my venting, I mentioned that a friend had texted me and offered to come read Scripture with me tonight when I told him that I wasn't sure where to start with my Bible.  I certainly wasn't in the same place mentally tonight that I was on Thursday, but Zack still wanted to come over anyway, and since I haven't seen anyone all weekend and he's such a wonderful guy and he wanted to talk, it happened.

Sometimes, you head into something thinking that it's not going to be a big deal, and then it actually turns out to be one.  We sat here in my room for a little over an hour, and nothing out of the ordinary happened, but it was such a sweet time.  I feel like a giant Christian cheeseball right now, but seriously, God's presence was felt so deeply.

He shared some verses and passages that had been hitting him hard lately, and for a change, I was actually really looking forward to digging into the Word, and I shared with him some of my favorite verses.  We talked about them, what we thought about them, and they each would end up leading us into talking about some aspect of our lives as believers.  Our walks with the Lord.  Our friendships with both believers and non-believers.

I learned a lot about him.  It turns out, we have a lot of the same struggles, and I got to see a different side of him from the serious guy that he usually seems to be.  We talked a lot about what had happened on Thursday, and I told him about how God showed me that it really is okay to be angry when he texted and made that offer.  What surprised me was then when he started telling me about how much he appreciates me and my friendship and how he sees me.  I don't remember the last time someone did that totally unprompted and without me asking a related question.  It made me think about Friday when Clayton told me "You help more than you know."  Another sweet reminder that just because I don't know what God is doing through me doesn't mean there's not something happening.

At one point, I told him that I really don't like feeling like I need people.  Zack responded with something that I've said numerous times, "We weren't meant to do this life alone."

It was nice to, for once, not feel like I was doing all the talking.  I was so appreciative that Zack wanted to come over tonight, but when I said thanks, he just sort of scoffed and said, "This did just as much good for me."  He texted me later to tell me how much he enjoyed it and said, "God was doing some works."  It happens in ways that can sometimes seem really strange and totally surprising, but God will show up anywhere.

I'm so thankful for how God loves me, so proudly and deeply that something like this happened even when I felt so down and was so angry.  God cared enough to put this friend and this time together in my path to remind me that my anger isn't too much for Him, that He still loves me just the same.  And to remind me, yet again, that my life is filled with love, with faithful, loving, kind, patient friends who know me and love me, sometimes even despite me. 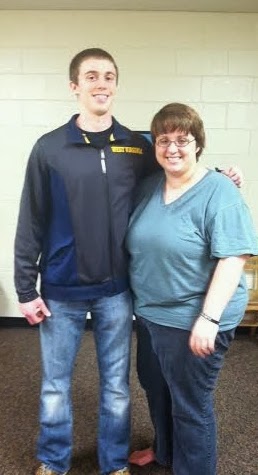 You can't tell, but about 5 minutes before this picture, we were watching a clip from Lord of the Rings that he thought of because of a verse I mentioned.  I certainly didn't expect that one.  :)

Tonight, I'm thankful for a time of community with a sweet friend that drew me closer to the Lord and uplifted me heading into another week.  Times like this remind me how far I have come.  I don't know where I'd be without friends like Zack.  I pray I can be this same kind of friend to everyone in my path.