Here's a secret about me.

When I was 8 years old, I told my mom I wanted to have a dozen children. I even made up names for all of them, too.

The number went down slowly over time.

But when these people... 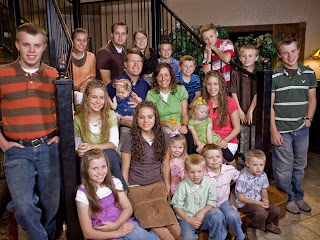 came into the news world big time, my fascination with babies and large families came back full force. No, I didn't want to have as many children as them all of a sudden, but I did become fascinated with the Duggars.

As I got older, I got smarter, as my mom called it. ;) I settled on the number 4 as the perfect number of kids for my future family. But I couldn't stop watching the Duggars in the news.

This family has sparked a lot of controversy. I get it. This many kids looks weird to a lot of people. But here's the way I see it... They support their kids. They don't take government money. They are using their TV show to announce the love and grace of God to the viewers. They are taking "trust God with all matters in your life" and living it out completely. Don't we all want to be like that?

In September, Michelle announced that they were expecting their 19th child on March 18th. At first, I thought it was a bit weird, since her daughter-in-law was also pregnant, and I don't get the "having babies while your kids are having babies" mentality, and then I realized how wrong I was for thinking that way. Who am I to decide when Michelle Duggar needs to stop having kids? They've obviously done a good job of raising the first 18. So what if I don't agree with their (as I call it) extreme Christian views? It's not my family, and it's obvious that they are doing the best they can the best they know how.

Once I got over my judgement of their choices, I thought it was really cool that she was due three days after Chelsea. And then...last week, Michelle had baby 19 14 weeks early. Little Josie Brooklyn Duggar. And my love for babies and baby names flourished once again.

Then, I began to pray for this family. So what if you think 19 is too many kids? So what if you think they're crazy Fundamentalists? There is a tiny, tiny baby in an Arkansas NICU who needs all the prayers she can get. She didn't ask to be born this early. She's got a long road ahead of her, and her parents do, too. It's not about what others think anymore. If this were someone's 1st or 2nd or 3rd child who was born this early, nobody would think twice about praying fervently.

I wish people would stop judging. It's not your life. Yes, they have gone on TV, but they are doing it with good hearts trying to spread the message of God and teach how a good marriage and caring parents can raise good kids, no matter how many kids you have. I wish Christians would see that.

So no, I may not always agree with them, but I will continue to admire and pray for Jim Bob, Michelle, Josh (and wife Anna and baby Mackynzie), Jana, John-David, Jill, Jessa, Jinger, Joseph, Josiah, Joy-Anna, Jedidiah, Jeremiah, Jason, James, Justin, Jackson, Johannah, Jennifer, Jordyn-Grace (who is 1 year old today!), and especially baby Josie.