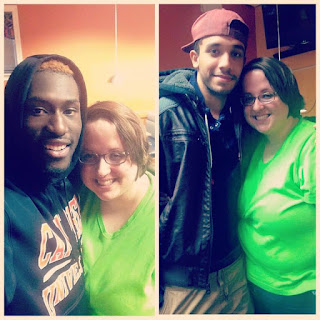 In just a few hours, these two boys of mine will be in the middle of their graduation ceremony. This is another time I'm really grateful for whoever invented the livestream, because I get the joy of watching it happen from more than 500 miles away.

I would scream it from the rooftops if I could just how proud I am of these two. They have stories that inspire me, faith that teaches me, and wisdom that pushes me to grow. They are two of my most favorite people in all the world, and tomorrow will mean as much to me as it would if it were Holly's graduation. I'm so proud of who they are and who I know they'll become. I know that God has great and wild plans for them, and I'm so honored that I get to play even a small part in all of it, because I know that they are going to do big things. There's not a doubt in my mind that God is going to use them to affect people.

They are an example of why my heart will always be tied to Campbell. I originally didn't even want to go to that school, but God knew that it was exactly what I needed. It may have taken me a few years, but I found the first family I felt like I could really trust and was completely safe with. I found the people who broke all the stereotypes I held because of my scars, and when I expected them to reject me, they instead insisted on getting close to me and taking me in. That campus will forever hold some of my dearest memories and spots that will stick in my mind holding stories that I cherish. I can't imagine what my life would look like now if I hadn't met my boys, especially Reafe and Ricky, and I'm so glad I don't have to know, because they have changed my life impermeably and forever. They're too humble to admit how wonderful they are or what a gift they are to me, but I'll keep saying it because my gratitude for and awe of them hasn't been diminished one bit. Campbell will always be not just my alma mater, but also the place where I met my best friends.

These two are also a prime example of why I can never regret my friendship with Ryann. I did initially because I was so hurt, but the truth is that while she may have caused me a great deal of pain in the end, it was because of her that I got to know these boys. Because I knew her, she took me to lunch the day that I initially met Bryce. Because I met Bryce, I knew who he was when I randomly went to the soccer game with Paige. Because I was at the game, I was in the parking lot to run into him after the game where he called me his good luck charm and asked me to come back. And it was because I came back that he invited me to the after-game meals and he introduced me/I introduced myself to the boys. So yeah, I will always be grateful I was friends with her because I now have these guys whose loyalty to me I can't ever question.

I am more than ready to go back to Campbell in a month (a month from tomorrow, actually!), but I already know that it's going to be really, really weird to see the other boys and not have Reafe and Ricky there. I know that leaving is what they have to do and what is best for them, but with them both being from other countries, I selfishly wish they'd still be there, because it's scary not knowing when you'll be reunited with two people that you love more than you can put into words. I'm thankful that God showered His grace upon us so that we could form this bond to begin with, and I have faith that God will bring us back together one day sooner than I expect. I also know that the bond we have is one that will outlast time and distance.

But that doesn't mean I'm not sad. I remember how I felt when I saw them for the last time before I graduated, but then at least I knew I'd be able to come back to visit. And when I saw them last January, I didn't realize they were graduating now; I thought they'd be graduating in May and I would get one more visit with them. So I didn't know that that time was my last. So I'm sad. Sad that I didn't treasure those goodbye hugs enough to last me for who-knows-how-long; y'all know what hugs mean to me. Sad that I didn't know just how big of a deal saying goodbye really was last time. Sad that I didn't have as much time as I thought I did. Sad that things are going to be very different when I visit this time.

Sigh. This is what happens in life, I guess. People grow up and you move apart and your best friends stop being minutes away. Some friendships will outlast the changes. But some won't, and that's the scary part. I don't want to lose any of these guys. But one thing I know is that God has proven His faithfulness in my friendships. He has brought exactly the people that I needed when I needed them and has kept the people who needed to be here in my life. He knows what is coming for me and all of the boys, and He knows where we'll be one, five, ten years from now. God knows what He's doing, of this I am sure.

Well, this post took a much more serious tone than I originally intended. Ah well, I'm choosing not to think so far in the future for now, and instead focus on tomorrow, my two incredible brothers, and the huge milestone that tomorrow is. I choose to celebrate them. They've earned it.