The Godless Generation Tour {A Review}

Tonight, I made my way out to Jersey City for a certain guy's show. (Praise the Lord that I made it all the way out there in nasty weather and didn't get lost.) 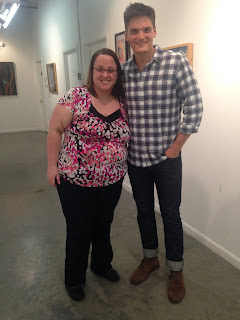 Look familiar? Oh yes, that's Jon Jorgenson. This was the first night of the Anima Series tour, "A Godless Generation." He and his sweet wife Erin 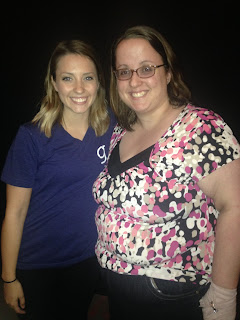 are driving somewhere in the neighborhood of 10,000 miles in the month of October to do shows all around the country. I've been counting down until this show since it was announced because if there was anyone I'd go out to Jersey City in the rain to see, it's Jon. I had high hopes and was really excited all day.

Well, let me tell you something. This show was even better than I hoped it would be. Jon's videos are great stuff, but seeing him in person takes it all to a whole new level. I guess it's sort of like how CDs can never compare to hearing a band live.

There were a few poems that he did that are also videos on YouTube, but despite the fact that I could recite them pretty much word for word, I was so utterly entranced by Jon and his delivery that I couldn't think about that.

And it wasn't just spoken word poems. There were stories he told in between, some of which made me cry from laughing so hard and others that made me almost cry from being so moved. There was one story he told about the counselor who was there for him the night he got saved/became a Christian/whatever you want to call it that brought back so many memories of my baptism and the night that everything changed for me. "I realized I had always wanted God in my life. I just never realized that He wanted me, too." That line hit me straight in the heart because that was exactly how I felt.

He messed up a couple of times in the beginning, but you know, that didn't take away anything for me. It just reminded me that he's not any more special than the rest of us. It showed that he's human, too, and that the important thing is that when you stumble, that you get back up and continue on. I was really proud to see him do exactly that and not let those couple mistakes throw him off for the rest of the show. And honestly, the show is so good and attention-grabbing that I forgot about those mistakes very, very quickly. He is goofy and throws some hilarious voices in, and there's one scene about dance moves that had me rolling. My one critique (if you can call it that) is I wish that he had spoken more slowly because he sometimes spoke so quickly it was a bit hard to keep up, but I think we can mostly chalk that up to first-show nerves.

One of the biggest signs for me that I really liked something is that when it's over, I'm disappointed and wish it could have gone on longer. That was definitely the case here. I could have listened to another full hour (at least) of him speaking because he is just. that. good.

But the best part is knowing that Jon isn't doing any of this to make himself or his YouTube channel more popular. It was evident throughout the entire night that he has two goals in this tour. 1) to glorify God and show people His love in a brand new way and 2) to meet the fans, or Fanimas as Jon likes to call us, who have gotten him to where he is today in this field and who made the tour possible.  He isn't just incredibly talented, every conversation I witnessed tonight shows how humble he is and how grateful he is for every single person he gets to meet.

I absolutely loved every single second of this night and was so, so grateful and honored to get to see such fantastic art and to support a guy who has done more for me (and for others, I'm sure) than he even realizes.

The rest of the show dates are listed here. All but one show is completely free, so if they are coming to your general area, I'm telling you - you need to find a way to go. Jon did an amazing job with this show, and I know that I'm going to be thinking about it for a long time.