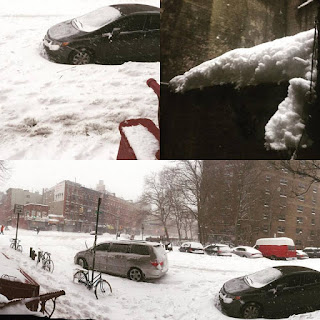 So. Blizzards are fun.

And by fun, I mean terrifying for me to even walk to the deli to get food. Thank the good Lord I made it there and back without falling, but it was questionable. Luckily, the guys in the deli all love me, so they said if I needed them, to yell and one of them would come help me. I bought two salads at once so I didn't have to go out again, at least not for a long while.

Those pictures up there are from when I made that trip at about 4:20 today. At the time, the snow at its highest point hit about halfway up to my knees and coming down hard. It's now about 8:30, and Holly just got home, and she said it's still coming down hard.

Being from the coast of NC, never in my life have I seen anything close to this, so it's simultaneously fascinating and scary.

Down in NC, they didn't get much snow, just a crapload of ice, so much so that Campbell lost power for about 24 hours because of extensive damage in the area. My friend said that they had to run the dining hall on a generator to feed everyone and give them at least a temporary place to sit and be warm, and then they opened up the Convocation Center, the one place on campus that was still lit and heated throughout the whole ordeal, for one massive sleepover for any of the probably 2,000 on-campus students who wanted out of their cold, powerless dorms/apartments. I'm glad I didn't have to be there through that. The one time we lost power while I was there was because of tornadoes, and it was only out for about four hours, and it was in April and thus not 30 degrees out.

According to the weather app on my phone, the snow is supposed to stop around midnight. I'm quite curious to go out and see how much there is at the end of all of this.

What? This is only my second NY winter. The beauty and magic of it all hasn't totally worn off on me yet. It may be a pain some days, but I hope it never does.