Friends help friends get some nerve.

Ah, this was another reunion I've been waiting for and counting down to! 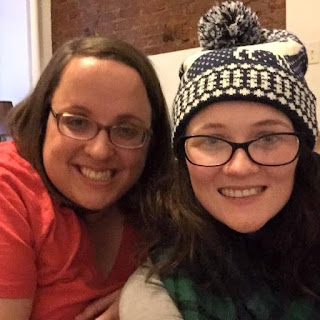 Emma! She is up here visiting someone else this week, but since we haven't seen each other in a year and a half, we knew we had to make plans to see each other. I wasn't allowed to go to work today because, as it turns out, I have a nasty case of bronchitis and was wheezing so badly when I went to my thyroid appointment yesterday I got sent to urgent care instead. So this morning, after I went to get my lungs rechecked and got a new prescription for my anxiety medication, I came home and took a quick nap (because I didn't fall asleep until after 4 this morning) and then met her at Spiegel for lunch.

Our friendship definitely started in a bizarre way, considering I had a major crush on her then-boyfriend and then bonded with her and helped her through their breakup, but now I absolutely cherish the relationship we have now. She is, to me, the kind of older sister figure I've always wished Holly was to me. I can talk to her about anything and everything, and I know without a doubt that she trusts me just as much.

Because I look up to her as much as I do, I take her encouragement to heart when she tells me that I should do something. So today, in the midst of the three hours we sat at Spiegel eating and talking, there were two major things I decided to do.

One: I joined an online dating app called Bumble. Yes, I know the stigma it has among a lot of Christians, but I firmly believe that joining this doesn't mean I have to or will change my morals. I like this one because the girls are in control and are responsible for making the connections once two people like each other. Perfect for a totally-not-passive girl like me. I've been here a year and a half and have barely stepped out of my shell/comfort zone. I want to fully enjoy the last months that I have here and meet new people. That's my only real goal here. I've been thinking about doing this for a while, but I don't think I would have gotten up the nerve to do it if it weren't for Emma today.

The second thing was a lot harder, but also really good for me. Like Summer, Emma knows all about the situation I've been dealing with lately, and while talking through the latest update with her, I finally gained the courage to do something about it. Anyone who knows me knows that it is incredibly hard for me to get the nerve to stand up for myself, because I hate confrontation and I hate risking hurting or upsetting people, but the more we talked, the more reassured I felt that I needed to do this. I couldn't (can't) allow myself to get back in another toxic relationship of any kind when I'm just healing and recovering from the first one, one that nearly destroyed me. I've felt so used and desperate and so many things I promised wouldn't show up again after Landon; I needed to say something.

So before allowing myself to overthink it, I texted him right there at the table to tell him we needed to talk and asked him to call me when he could. Well, he did almost immediately. So I went outside in the 30 degree weather and told him everything I was thinking and feeling. Everything he had done that was not okay but that I'd let slide before. Everything I was afraid to tell him before. I put it all out on the table because I knew this was going to be the only chance I had. I told him just how scared of him I am, but that I don't want to be. I told him that it felt like everything had changed, that he had changed. He knows all about Landon, and I reminded him of that, and said straight out that I can't allow myself to get manipulated and used again. He said he didn't know where any of this was coming from and tried to reassure me that he's still him, and maybe he didn't and maybe he is, but I told him that it's the truth and that I need some time and space away from this, away from us, away from him. I need to get my sanity back and protect my still recovering heart.

There was nothing left to say, so I went back into Spiegel shaking, partially from the cold and partially because my heart was racing from actually doing that. Emmanuel, working today, gave me a hug, then Emma looked at me and said, "Do you need a drink?" So I did something I've never done before and had a couple drinks in the middle of the day. It calmed me down and we talked about lots of things, including other stuff to get my mind off of it. We finally left Spiegel about 3:00 and hung out up here for a couple more hours before she finally had to go. It was a lot more time than I was expecting to get with her, so I was really happy and my heart was full by the end of the afternoon.

I have really good friends. They protect me, but they also push me. Emma, Summer, Clayton, with those three in my corner, I know that even when I make some stupid mistakes (because I have and I know I will again), they are there supporting me and pushing me to be as smart and in control as they know I can be.

Thanks to Emma, I got a chance to do that today.