"You will always be welcome here."

Since I'm fairly certain that as nasty as my leg, ankle, and foot look, they're just horrendously bruised, I decided to go back for another dance class today. (Plus, I missed it. What can I say? That place is infectious.)

I was nervous this time, only because the worrier in me was afraid that having two seizures in three visits was going to make them not want me anymore. The logical part of my brain knows that's ridiculous, but logic and emotions don't always mesh very well. I had sent Kosta, the manager, an email last Tuesday night, and I just hoped that he read it, because it explained everything on my heart. I didn't get to talk to anyone before class because everyone was still teaching, but they all said hello and it was a lot of fun just to watch them. You can tell their different styles of teaching, and plus it just fascinates me that that many lessons can go on in such a small space and no one runs into each other!

In the middle of the group lesson, Kosta walked over and looked at me and said "I just read your letter." He held his hands in the shape of a heart, said "It was beautiful. Thank you, love," and blew me a kiss. That alone told me everything was okay.

But I still wanted to talk to him for a second afterwards. So I got his attention in his little glass office thing, and when he finished what he was doing, he came out and talked to me.  He immediately smiled at me. I said "So you read my email?" And he started talking about how he didn't want me to feel bad and that it was okay. He asked me again when I was going into the hospital and what they'd be doing and wished me the best. But then he said one thing that really stuck out to me.

"God forbid it should happen again, but if it does, it does. You will always be welcome here."

This was my fourth time in that studio, and I can already tell you that this is one of the happiest things in my life. With my disabilities, and the epilepsy, and all the other stuff, it can be very hard for me to feel normal. And sometimes, all I want is to just blend in with everyone else. But it's very clear why the Dance With Me Studios are collectively referred to as the DWM Fam...because they treat everyone who walks through their doors like they're family. And when you're family, you belong. The only other times I remember feeling this sense of safety and peace and belonging as soon as I stepped foot somewhere were in the Reformation classroom and the soccer field with my brothers there. I told Kosta in my email that I feel included and seen and beautiful there, which are all often rare things for me, so it means the world. When you know you're different, even when you know it's a good thing, sometimes it can be so relieving not to feel different for a change. 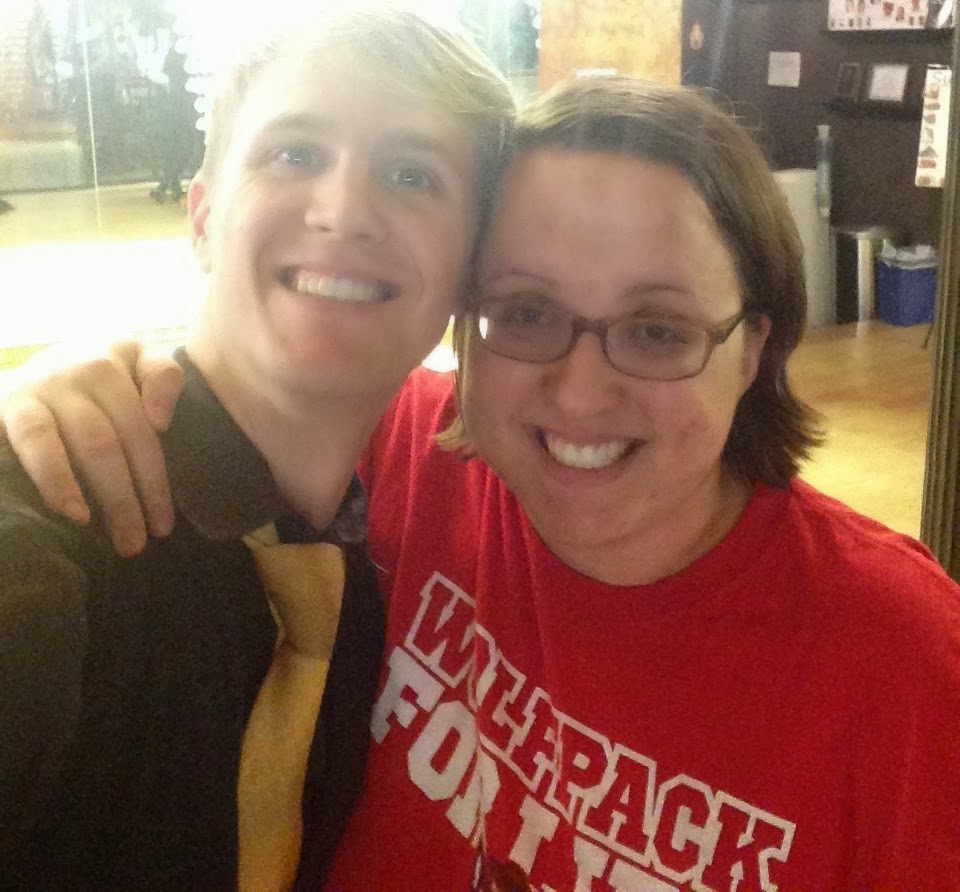 After class, I went home, skipping the party (not that I had the $15 anyway) to end on a high note while I was feeling okay. But I didn't really want to go home, so I went in Spiegel and hung out with my buddy. 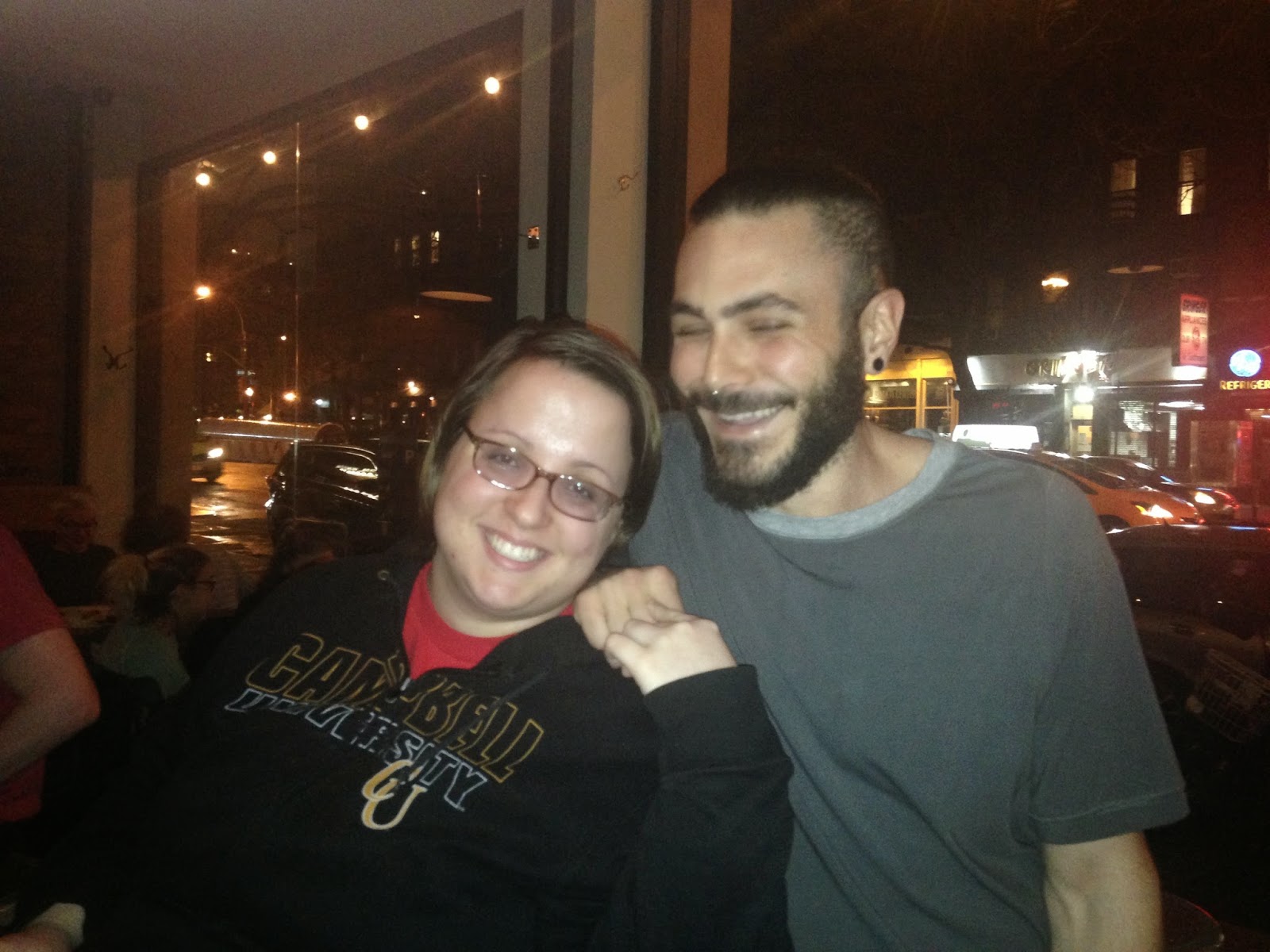 A terrible picture, but this is Eldar. He's one of the bartenders there, and he's just a doll. I've gotten in the habit of going by every shift he's on just to give him a hug and say hi. He gives awesome hugs. And he must be special, because he doesn't find it weird at all. :p But seriously, the guys there have told me I'm always welcome to hang out there, even if I don't have money to eat. They treat me like a VIP - it's like they have my usual order posted in the kitchen or something - and they always greet me with hugs, no matter who is on when I stop by. I'm being perfectly honest when I say that there have been days when stopping by there has been the only good thing in my day.

So all of this is to say that this week something has been made abundantly clear to me:

I really belong here. Thanks be to God.

(PS: I was talking to Mike before I left, and this was part of the conversation:
Mike: You have a bad bruise on your arm! (yeah, turns out there is also a large purple bruise on the back side of my right upper arm, which is why I never noticed it.)
Me: (shows him my leg and ankle) I had a nasty fall on Saturday.
Mike: How'd that happen?
Me: Let's just say it involved vodka and a bar stool and not enough balance.
Mike: (laughs) Okay, I'll let you save that story for another time. Because, wow.
Me: There are many sides to me that you wouldn't expect from the surface.
Mike: I bet! I can tell!
:D)