This is what it's about.

I meant to post yesterday, but the day sort of got away from me.

On the 10th, after a good deal of rain, a rainbow appeared, and from many angles, it looked like it was originating from One World Trade Center. I thought that was so symbolic.

Yesterday, I had to go to the pharmacy, which is only two avenue blocks away, but during that round trip, I'd say 75% of the people I saw were wearing 9/11 shirts or red white and blue, and I must have seen 5 or 6 ambulances. Being in New York, you get used to hearing sirens, but yesterday, they were coming a lot more frequently than usual.

I'm just glad I don't live up near OWTC, or I probably would have spent the entire day sobbing. For that reason, I avoided the news pretty much all day, but late last night when I couldn't sleep, I found a video of a story that I had never heard before and couldn't help but watch it.

Do you know about the Great Boatlift of 9/11? Did you know hundreds of civilians came together that day, and those boaters evacuated nearly 500,000 people in less than 9 hours, making it the largest sea evacuation in history, greater than an evacuation during World War 2 that took place over 9 days? Yeah, neither did I. Take 12 minutes and watch this video.

This is what it's about, y'all. Not Bush vs Obama, or Republicans vs Democrats, or arguments about what should have been done different or who's a bigger patriot. It's about the innocent people who died. It's about their families still grieving. It's about the men of Flight 93 who saved countless other lives by crashing that place in a field. It's about the first responders who died trying to save anyone they could find. It's about the survivors who got sick in the years afterward from what they breathed in that day. It's about all of us as Americans, remembering that even for a short time, we were one people and one nation. If only we could get back to that. 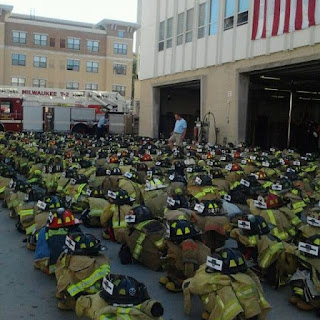