So remember how at the beginning of last month I posted that the lady I'd been seeing in the Women's Health department of the Student Health Center was sending me to an OBGYN specialist/surgeon to be evaluated for endometriosis? Well, I finally got to have that appointment today.

Many times in the past when I've gone to a doctor for the first time, it was a fight to get them to listen to me and work with me instead of acting like they knew my body better than I did. So I was honestly expecting to go in and have to beg this woman to fully evaluate me and agree to do the surgery. It didn't exactly work out like that.

The whole appointment took like twenty minutes. No joke. First the PA came in, looked over the paperwork I had filled out, asked me like five questions, and then said that because I can't have an MRI because of my shunt, we should just go ahead and do surgery, so he explained the basics of the surgery and then said he was going to go get the doctor. A few minutes later, the nurse brought me into the doctor's office. I sat down, and she asked me if I had any questions about what the PA said or the surgery in general. I said no other than when could we do the surgery, and this is where it got a little hard.

She said that after looking at my file and listening to what the PA told her, she is really concerned about what could be going on and wants do to the surgery as soon as possible. So she told me she has an available slot on the 20th and wanted to know if I could get a medical clearance from my primary care before then. The 20th of June. As in less than two weeks away. She said to give her a few minutes and then she would come in and examine me, so I told her I'd go ahead and call and see how soon I could get in to get the medical clearance. Well, I guess because it's summer and most students are gone, but my doc who is usually very busy could get me in basically any time I was available Monday.

Then the doc came in, started examining me and asked if what she was doing was hurting and where. I said all over, and she stopped and basically said "Yep, you need the surgery." I put my clothes back on, walked out, got a folder of pre-admission info, was told someone would call me tomorrow or Monday with info about where and when I needed to be for pre-surgery bloodwork and whatnot, and then I was gone.

When I walked out of the building, I felt like my head was spinning because it all happened so fast. That, and I wasn't expecting them to be able to do surgery so soon. It took more than a month for me to even be seen because she is such a busy doctor, so I thought it would be a while before she had an open surgery slot. Nope. Second, I found out that the surgery is going to be more extensive than I thought it would be because they don't believe in using the lasers like I was expecting.

And also, despite the fact that I've done this so many times, it's still surgery. I like to put on a face for a lot of people that stuff like this is old hat for me and just doesn't bother me anymore, but it does. It bothers me. It's still hard and scary and overwhelming. This is the kind of thing that doesn't get easy to deal with no matter how many times you do it. So by the time I got in the cab to come back home, I was not in a great mindset.

Luckily, I had the forethought last night to have some of my brothers praying for me. So I texted two of them and called one, and long story short, I got pep talks that only my boys could give. When I got to spend close to half an hour on the phone with Tunji, we had each other laughing hysterically. Laughter really is the best medicine. Then I got a nice long FaceTime date with Clayton which is always good for the soul.

But after I got off the phone with him because we were both exhausted, the silence set in. And maybe it's just my 100% extrovert personality or the fact that silence is terrifying for this generation in general, but when I have too much silence, I get way too caught up in my head, and that's when things get ugly. After a couple hours, I was a mess. Enter this guy. 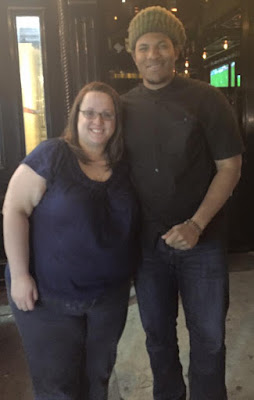 This is my buddy August. He's one of the bouncers at the bar on the block that I mentioned yesterday.  I jokingly like to call him "my knight in a shiny purple headband." He was Jesus in the flesh to me tonight and not only made me smile and laugh, but also helped me get back to a place where I could focus on the truth: God is good and faithful and loves me, and all of this is just one more chapter to add to the incredible story I've been given the chance to tell. He is one of those people that just shines the light of Christ without even trying because of how deeply and passionately he loves everyone he comes across.

God is good, y'all. God is so good. I'm so thankful that I am getting this surgery taken care of, but even more than that, I'm so incredibly thankful for all of the people who showed up today. Near and far, I am surrounded by people who are invested in me, in my physical and emotional wellbeing. These are the people who pick me up when I'm down and refuse to let me go when they see me slipping into the darkness. Second to God, they are the reason why I have the strength that people see in me. There's no way I could do any of this without my Father, but there's also no way I could do this without my people. They are my lifelines.

I'm going to bed tonight with a smile on my face, and ten hours ago, I don't think I could've thought that was possible. Thanks be to God.