I got to talk to my favorite British boy today. 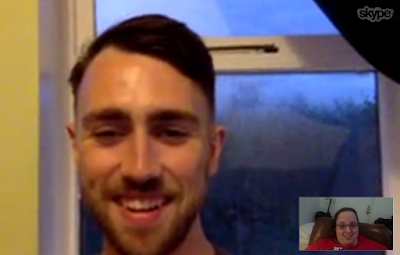 And the best part is that he has a Mac now which means he has a webcam which means I actually got to see his face for the first time while talking to him in I don't even know how long.

But that's not even the really good part. The part that made me feel so good is that I think this is the first time all week that I've really smiled. And by "really smiled," I mean that I was happy enough to forget about everything else that has been weighing me down.

There's more than 3300 miles between us and it's been nearly 8 years since we've seen each other in person, but Jay and I still have this incredible bond that I'm so thankful for. Sure, we've had rough patches and times when we haven't spoken for a bit, but when we do, we just instinctively know how to help each other and what we need. It sounds weird to say this when we have so much time and distance between us, but he really is one of the people I trust most in this world, and I'm pretty sure he'd say the same. I truly don't know where I'd be without him. When I say that my friends are what keeps me going when things are hard, he's included in that.

It was only about 35 minutes today, but this did me so much good. And when I thanked him for taking time out of his incredibly busy schedule to get on and chat for a bit because it helped, he told me "anything for you."

I'm so thankful for my British love. I know that this bond is one for the ages. And that is a beautiful gift.